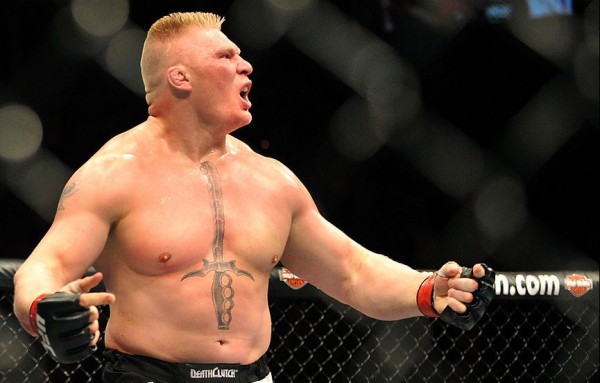 UFC and WWE star Brock Lesnar has reportedly failed a drug test administered by the United States Anti-Doping Agency for a second time.

According to a report from ESPN’s Brett Okamoto, UFC officials were informed of the failed drug test on Tuesday for the substance clomiphene. This is the same drug, an anti-estrogen blocker, that led to a failed drug test for Jon Jones.

Lesnar was notified of a potential anti-doping violation from a drug test administered on June 28. This latest failed drug test was taken on July 9, just as Lesnar was to battle Mark Hunt at UFC 200. Because the results of the match-day sample were not ready ahead of the match, the fight went on as booked. Lesnar reportedly earned $2.5 million for his appearance in the fight. Hunt took home $700,000 and has been livid about the news regarding Lesnar’s failed drug tests. This is certainly understandable, although Lesnar will be given a chance to contest this ruling. Lesnar had never failed a drug test before June 28, according to reports.

“It is important to note that, under the UFC Anti-Doping Policy, there is a full fair legal review process that is afforded to all athletes before any sanctions are imposed,” UFC said in a released statement. “The Nevada State Athletic Commission also retains jurisdiction over this matter as the sample collection was performed at UFC 200 in Las Vegas. Consistent with all previous potential anti-doping violations, additional information will be provided at the appropriate time as the process moves forward.”

The news, of course, comes on the same day the WWE is staging a WWE draft to split the roster of superstars between flagship programs Raw and SmackDown. As some NFL players of note might tell you, this new should have a damaging impact on Lesnar’s draft status (if you believe any of this is real, of course).

This is also some unfortunate timing for 2k Sports, who just put Lesnar on the cover of WWE 2k17. Oops.

.@WWEgames finally wised up and put The Beast on the cover of #WWE2K17. https://t.co/FczwUofQ6l pic.twitter.com/FWJ7851lh2

Brock Lesnar may be calling the shots, but even he cannot maneuver around drug testing policies.