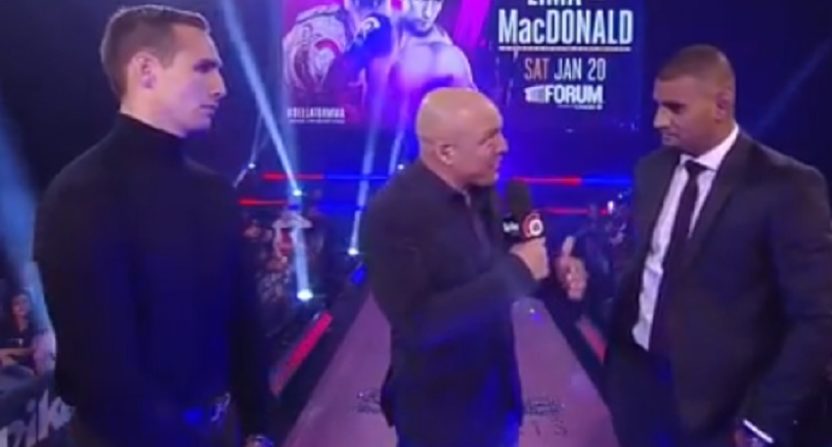 The MMA Ten keeps you updated on the latest news each week from the world of the UFC and beyond!

But Lima had the line of the year afterwards in an interview with MMAJunkie.com, commenting on MacDonald’s turtleneck and Steve Jobs-like looks.

“You know, nobody broke us apart. So we just stood there. I didn’t want to be the guy who looked away first, but it didn’t matter. It’s fun. It’s real. It’s a good feeling to get that first staredown. I thought he was going to sell me an iPad.”

Things got a bit heated at the UFC 216 media lunch. Lightweight contender Tony “El Cucuy” Ferguson and former UFC heavyweight champion Fabricio Werdum got into a war of words, and it even featured different languages.

If you’re wondering why a lightweight and a heavyweight who aren’t fighting each other got into such a heated exchange, you’re not alone. One guess is that Ferguson has had a war of words for a long time running with Khabib Nurmagomedov, who is managed by Werdum’s manager.

This is from the Silmar ‘Sombra’ Nunes vs. Caio ‘Paturi’ Robson Silva at Capanema Fight Combat in Capanema City, Para, Brazil last Saturday. What makes this exceptional — besides the corner entering the cage when the round was still in session — is what Nunes did after that happened.

From the UG: “In the middle of the disgraceful scene, nobility shone through. Rather than exchange with the attacking cornerman, or throw up his arms in victory, Nunes immediately attended to the man he had just moments beforehand been trying to put to sleep.”

UFC Hall of Famer Chuck Liddell has been seen training again, as well as discussing a possible comeback to MMA with Bellator. But after the debacle that was Kimbo Slice vs. Dada 5000, the organization will certainly take every precaution to assure that Liddell is indeed fit to fight. The Iceman turns 48 in December, and Bellator president Scott Coker detailed what will have to transpire before the legend competes in the Bellator cage. Via MMAJunkie:

“I’d have to talk to Viacom about it. He’d have to go through a battery of tests, and it would be a longer process than he would be fighting in January. I’ve got to reach out and see if (Liddell would) like to do some fan fest stuff for us and be in the community, but that’s it. There’s no fight for him.”

That’s a stern message, but one that won’t do much to quiet rumors. Liddell said Chael Sonnen would be an easy fight for him in a comeback, and the possibility of a third contest between Liddell and Tito Ortiz would have fan appeal.

Aaron Pico has been one of the most-hyped prospects in all of MMA. He qualified for the Olympic trials at age 19 and has won a slew of world titles in wrestling. Bellator pumped up the promotion on him, but Pico was defeated by Ian Freeman just :24 into the first round of his debut. Pico made his second Bellator appearance last weekend and this was the result:

Pico is just 21 and has a very bright future ahead of him.

M-1 Global is based in Russia and will celebrate their 20th anniversary with an event on Oct. 27. It has long been a destination for fighters before and after their UFC careers, and they have had some of the biggest names in MMA fight for them, including the legend Fedor Emelianenko and his brother Aleksander. They compiled this video of the best knockouts of their 20 years in MMA.

If you’ve ever watched an MMA event live or on TV, there are often long waits between fights. M-1 came up with an amazing way to fill that time: Medieval Times on Roids. Two men fully regaled in armor take to the ring with shield and sword to do battle. If you thought Matthew Broderick vs. Jim Carrey in The Cable Guy was rough, check this out:

I’m pretty sure The Comeback is going to get in on the whole Knight Fights business, so be looking for that in 2018.

From Hands Cuffed to Hands Raised

Speaking of the Emelianenko brothers, Aleksander has a lot to celebrate of late. He was recently released from prison early and then scored a vicious knockout win in his first fight post-incarceration.

With the Jon Jones mess winding down and Daniel Cormier reinstated as the UFC light heavyweight champion, the time was right to begin talking about a title defense. So DC took to Twitter and asked the fans. The result?

@volkan_oezdemir I asked and people wanna see u and I scrap. So you got it man! Let me figure a date now. They chose u bud! Congrats

Some have clamored for DC to fight Alexander Gustafsson again, but Volkan “No Time” Oedzemir was the choice of the fans. Cormier plans to oblige that request. We’ll have to wait and see if the UFC does the same.