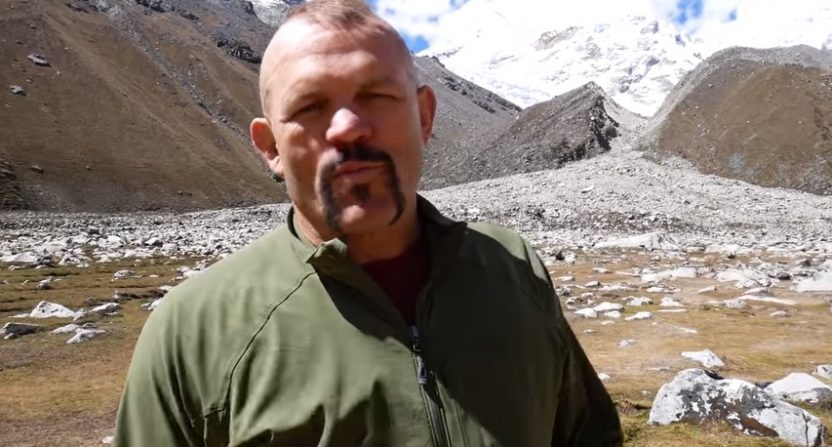 So, this is sad as shit – Chuck Liddell, the 48-year old former UFC light heavyweight champion and Hall of Famer, announced his comeback on The MMA Hour with Ariel Helwani on Monday.

Chuck Liddell just announced on #themmahour that he is officially un-retired. He is back. He all but guaranteed he will fight Tito Ortiz in November under the Golden Boy banner. “It’s going to happen,” he said. https://t.co/qqgYv4N7RAhttps://t.co/lLocQxXeOI

Liddell’s last fight game in June of 2010 against Rich Franklin, who knocked Liddell out cold with a short right to the jaw at the end of the first round. It was Liddell’s fifth loss in six fights, with four of those five losses coming by knockout. His last win in the last decade (yes, decade) came in 2007, when he won a decision over Wanderlei Silva at UFC 79 in a rock’em sock’em robots kind of fight that was named the UFC’s 2007 Fight of the Year.

After his retirement, Liddell was given an executive position with the UFC, but Endeavor, the UFC’s new ownership group, eliminated Liddell’s job near the end of 2016.

But saying “I want to come back!” is different than actually stepping in the cage and fighting. Unfortunately, it looks like a promotion already had Liddell’s worst interests in mind, and that promotion is Golden Boy, who is lining up a fight between Liddell and fellow retirement circuit participant (and former Liddell blood rival) Tito Ortiz.

Liddell said a deal has yet to be finalized with Golden Boy but tentative plans are for the fight to go down in November in either Las Vegas or California.

Liddell vowed that he is serious about his comeback and is set on returning to the cage with or without Ortiz.

“It does not hinge on Tito’s participation,” Liddell said.

“I miss it. I never stopped missing it. And I kinda hadn’t really thought about it much. And then when he brought it up and we started getting going, and I started training and I started doing stuff again, getting ready to try to take this on, it made me go, ‘You know what, what if he pulls out? Am I not going to fight? Am I going to do all of this and not fight?’ Oh no, we had to have somebody backing up, and if it doesn’t work out with him, I’m [still] going to give it a shot. It’ll be somebody else, one of the guys from my past probably, most likely, and we’ll see where I’m at.”

Ortiz was jonesing for another fight with Liddell over the weekend on Instagram.

I want to give the fans the fight they have been waiting for #TitovsChuck3 #Redemption thanks to @primetime360esm with @get_repost Tito Ortiz is officially out of a year long retirement. While on @BitetheMic with @MikeTyson and @Tattootheone Tito was asked if he was going to fight @chuckliddell -Tito replied why doesn’t @OscarDeLaHoya @GoldenBoyBoxing get into #MMA and promote the fight. Oscar should promote it and give the fans what they want Tito Ortiz vs Chuck Liddell 3. @primetime360esm #goldenboymma #moneyfight #megafight #badblood #titovchuck3 #4thefans #Mexico #USA #Brazil #Canada #Japan #UK #Australia #Africa #China #Europe #Germany #Russia #ufc @espn @foxsports @sportscenter @cbssports @sportscenter @sportsillustrated

Liddell also said he wants to fight Jon Jones after two or three warm-up fights, which would be an awful idea (even given Jones’ seemingly neverending PED issues) because Jones could literally kill him inside the cage.

Given what we know about concussions, CTE, and brain injuries…why would anyone think this is a good idea? Why would any promoter or state athletic commission even entertain the idea of a 48-year old Chuck Liddell getting back in the cage, even against a 43-year old Tito Ortiz?

Oh, right – money. People are going to pay money to watch Chuck Liddell and Tito Ortiz punch each other in the face, concerns about their health be damned.

Liddell also doesn’t seem to give a shit about his health.

Chuck Liddell on critics of his comeback: "If you don't like it, don't watch. Go watch the old films of me, it's okay. It's okay with me." #themmahour

Hopefully, the people at Golden Boy realize how much of a mistake bringing Liddell back would be and put the kibosh on his comeback. And if they don’t, athletic commissions all across the country need to refuse to clear Liddell for a fight.