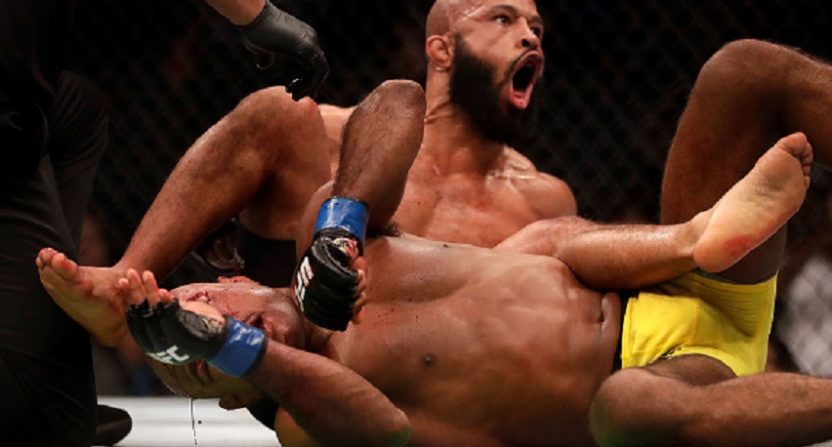 This week: We offer you a respite from the press conference tour of Mayweather/McGregor! Listen to some of Snoop Dogg’s first UFC commentary, check out Cris Cyborg calling out a WWE wrestler, take in a freakshow fight from Japan and enjoy the world famous MMA Nickname Battle of the Week!

Lots of talk this week about what’s boss and who’s the boss at the entertaining, yet utterly ridiculous Mayweather/McGregor press conferences. Nate Diaz hopped on his Instagram to let everyone know — especially Conor and Dana — who the real boss is.

We just have to see Nate and Conor fight one more time. Maybe that’s what Nate is holding out for because he hasn’t fought since losing to Conor in their rematch back at UFC 202.

Snoop Dogg and Urijah Faber are teaming up to offer viewers of the new Dana White’s Tuesday Night Contender Series an alternate commentary to the fights known as SnoopCast. If you ever wondered what it would be like if MLK called UFC fights, Snoop gave you a little taste Tuesday night.

Another Freak Show for Gabi Garcia

Gabi Garcia is a BJJ world champion and she made the switch to MMA a few years ago. She’s turned her career into an absolute farce. Her most recent opponent was the 45-year-old Megumi Yabushita, a kickboxer with a professional record of 1-10. Garcia outweighed her by at least 70 pounds, likely even more on fight night. The “fight” went as expected.

Japan loves the freakshow element of the fight game, and at times fight fans do too. But mostly when it’s along the lines of Jose Canseco vs. 7-foot-2 Hong Man Choi, not this garbage.

Cris Cyborg will get to fight for the UFC featherweight title at UFC 214 on July 29, but she got in on the Mayweather/McGregor fun this week by tweeting to WWE boss Triple H and calling out WWE superstar Becky Lynch.

If you are smart @TripleH you Don't let @BeckyLynchWWE anywhere near the ring with me! Ireland can't handle another star losing this summer https://t.co/4qdPM1ado4

It was a tongue-in-cheek tweet, but “The Lass Kicker” responded with a KO punch.

Are you sure Dana would let you? Seeing as he doesn't seem to let you do much else? https://t.co/M5cDwnbGXx

Justin “The Highlight” Gaethje may have just joined the UFC, but he’s already scored himself a coaching gig for the next season of The Ultimate Fighter. Gaethje made his debut with an outstanding second round-finish of Michael Johnson last Friday at the TUF Finale.

UFC lightweight contender Kevin Lee didn’t like the news all that much.

Who the fuck wanna watch @Ealvarezfight and @Justin_Gaethje coach TUF. Y'all both slurring words like a sobriety test. #PunchDrunk

The next season of TUF will feature the women’s flyweight division, a new addition to the UFC. It will include crowning the new division’s first champion at the end of the season.

Conor McGregor has a fan in fellow countryman Rory McIlroy, currently the No. 4-ranked golfer in the world. McIlroy offered up his thoughts on McGregor recently and talked about his admiration for McGregor’s mindset and mentality.

Now let’s all hope Rory shows up to the next major with no shirt on and a polar bear coat.

Cutting weight is one of the tougher things to do in the fight game, but if you have long hair, you can easily cut some weight with just a pair of scissors. Brittney Elkin will make her Bellator debut Friday night, and she did just that to make the weight limit.

Yesterday pic … today pic… see you tomorrow after the fight! Thank you everybody!

In somewhat of a shocker, UFC flyweight champion Demetrious “Mighty Mouse” Johnson won the ESPY for Best Fighter, beating out big names like Conor McGregor and Gennady Golovkin. McGregor came up 0-2 by losing to Johnson in the Best Fighter category, and to Usain Bolt in the Best International Athlete category.

Amanda Nunes made weight and was set to defend her UFC bantamweight title against Valentina Shevchenko, but she pulled out of the fight, even after being medically cleared to participate. Nunes said she ended up going to the hospital due to chronic sinusitis, but Dana White wasn’t particularly buying it.

“After the weigh-ins she made weight. Leading up to the ceremonial weigh-ins I got a call she wasn’t feeling well. It was questionable whether she was going to show up. She does them, she was good. This morning, I hear she’s not feeling well again and she’s probably not gonna fight. I asked the doctor’s what’s wrong, she was medically cleared, they found nothing wrong with her. She just didn’t feel well.

“You can’t make anybody fight. he said, ‘I don’t feel right.’ I think it was 90 percent mental and 10 percent physical. A lot of times we’ve had fighters who don’t feel right and other times they’re outright sick. I don’t know if I’ve ever had a situation like today where she was physically capable of fighting.”

I can easily break this down for everyone. If Nunes was the challenger instead of the champion, she would have fought. White said he will not put her as a headliner in the future.

This week’s MMA nickname battle of the week will take place at UFC Fight Night Glasgow, which will air in the states on Sunday at 3p.m. ET. It pits Paul “The Irish Dragon” Felder against Stevie “Braveheart” Ray. “The Irish Dragon” sounds like something out of a Marvel comic book or a made-up character on It’s Always Sunny in Philadelphia. Felder explained to UFC.com how he got the nickname.

“I got the name because I grew up in a tough Irish-Catholic neighborhood in south Philadelphia, and I have done traditional martial arts such as Karate and Taekwondo.”

Ray is a Scottish fighter and earned his nickname from his home fans due to his massive displays of courage and will in the cage. Both Ray and Felder get after in the cage, so this one should be an exciting fight.