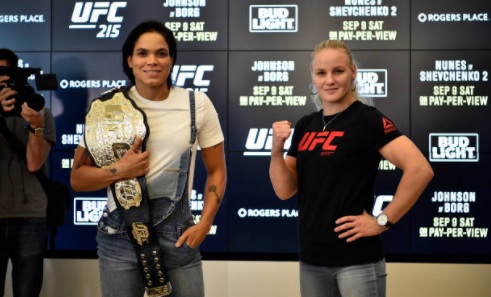 UFC 215 goes down Saturday night in Edmonton, but the UFC’s version of “The Great One” is no longer on the card. The UFC released a statement regarding the cancellation of the main event, making an already bland card less appealing.

Even so, there are still plenty of reasons to watch. Let’s check them out in your UFC 215 preview.

Demetrious “Mighty Mouse” Johnson was scheduled to defend his flyweight title against Ray Borg at UFC 215, and he would break Anderson Silva’s record for consecutive title defenses with a win.

But news broke that opponent Ray Borg has been ill all week and progressively getting worse, leaving UFC doctors to declare him unable to fight. The official UFC statement says Borg is dealing with a viral illness. This fight will be rescheduled as soon as possible, but that makes it two out of the last three UFC shows with canceled main events, and the third was the Jon Jones win over Daniel Cormier, which was sullied by Jones’ failed drug test.

Hey, y’all got any more of those boxer vs. MMA fighter bouts lined up?

Nunes was criticized for pulling out of the contest because she had been cleared to fight, but withdrew anyway. After the event, UFC president Dana White said he would not use Nunes in any future main events due to her late withdrawal. But with the cancellation of Johnson vs. Borg, the UFC has no choice but to make Nunes vs. Shevchenko the main event.

The new main event is definitely intriguing, a rematch of their UFC 196 fight that Nunes won via unanimous decision. That was a three-round non-title fight. Saturday, the two are scheduled for five rounds, and conventional wisdom says that could be the difference since Nunes has had problems with her cardio on occasion.

Shevchenko proved in their first fight that she could compete with Nunes, and many wondered what would have happened had they gone five rounds. They’ll get to find out Saturday night. Shevchenko is actually the favorite at some sportsbooks, even though she is the challenger, and if she can take this past the third round her chances to become the new champ increase dramatically. She’ll need to do a better job of keeping the fight standing, something that cost her in the first fight.

“Bullet” has been masterful in two appearances since she last fought Nunes. She dismantled Holly Holm over five rounds in their main event battle at UFC Fight Night in 2016, then scored a Performance of the Night bonus for her submission win over Julianna Pena this past January.

Former UFC lightweight champion Rafael Dos Anjos lost his title to Eddie Alvarez last year, then followed that up with a loss to lightweight contender Tony Ferguson. Those two defeats led Dos Anjos to change divisions, moving up to 170 lbs. His first foray at welterweight went well with a convincing unanimous decision win over Tarec Saffedine.

Now he gets the always-game Neil Magny, who had a seven-fight win streak stopped by BJJ King Demian Maia but has since won four of his last five. He remains one of the most unheralded fighters in the UFC, even though a win Saturday night will move him into the top five of the division.

Your UFC 215 Nickname Matchup of the Week

Our nickname battle of the week is the features Sarah “Cheesecake” Moras against Ashlee “Rebel Girl” Evans-Smith. Moras loves cheesecake, but the nickname was actually bestowed upon her after walking out to The Cheesecake Song by The Muppets at her pro debut. It’s a catchy tune.

She said the nickname just stuck, so she kept it. Now she likes to have cheesecake parties where all the attendees have to bring a different type of cheesecake. I would very much like to go to a cheesecake party, with or without UFC fighters in attendance.

Five other fighters you’ll want to watch at UFC 215.