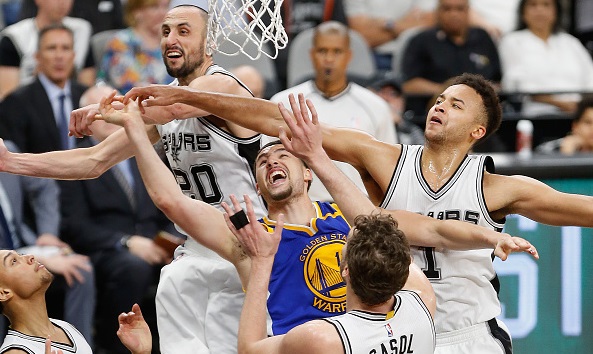 Since this is the first year of the earlier start to the season, there have been some surprising starts over the first few weeks, moreso than in years past because of a shorter preseason. Cleveland may be struggling right now, but they’re still going to be featured among the top games to watch this month. Conversely, fast-starting teams like Orlando and Detroit will have to wait until at least December to be featured in our monthly preview, as they’re likely both flashes in the pan.

On the other hand, to account for the parity we’ve had in the league thus far nearly half the league, 14 teams, will be featured in our games to watch. Let’s get to it.

We get our first look at a potential playoff preview in the Western Conference. The Spurs have been treading water (4-3) while Kawhi Leonard is out with a quad injury, led by LaMarcus Aldridge. Their role players have been excellent so far, especially Rudy Gay, Kyle Anderson, Danny Green and Dejounte Murray.

After Gordon Hayward’s horrific injury for the Celtics on opening night against the Cavs, the Wizards were viewed by some as the biggest obstacle to Cleveland reaching the Finals again. Washington’s largest improvement is in its depth, with Kelly Oubre and Jodie Meeks playing well alongside John Wall, Bradley Beal, Otto Porter and Marcin Gortat.

Cleveland’s defense has been a disaster in losses to Orlando, Brooklyn and New York and is down to 28th in points allowed per 100 possessions. The 3-4 Cavs need to adjust to teams playing faster so far this season, and that’ll be put to the test against Washington, which is fifth in the league in pace.

The Celtics are off to a fast start despite the Hayward injury, getting great contributions from youngsters Jaylen Brown and Jason Tatum. The Lakers-Celtics rivalry gets some extra juice with their new point guards, Kyrie Irving and Lonzo Ball.

The Boston fans will likely be all over Lonzo, and his matchup with Kyrie is sure to be a lot of fun. After the way the Clippers’ Patrick Beverley and Wall played against Ball on national TV, it seems like every national game the Lakers play is going to be fascinating.

The Raptors have looked really good so far, starting off 4-2 and in the top 10 in the league in both offense and defense. They’re playing faster (11th in pace), shooting more threes (13th in attempts per game last year after finishing 22nd last season) and Toronto’s bench has been phenomenal early on.

With Chris Paul out and their depth somewhat diminished because of all the players they had to deal to the Clippers to obtain him. The Rockets are off to an uncharacteristically slow start on offense, in the middle of the pack in scoring, efficiency and pace. Toronto is playing more like Houston, and we’ll see if Houston can get back to playing more like Houston.

Kyrie Irving gets his first crack at the Warriors with his new team, as many will be touting this inter-conference matchup as a possible Finals preview. Boston, as every contender in the league, made its offseason moves with beating mighty Golden State in mind. This will be the Celtics’ first shot to see if they can measure up.

The Thunder are still trying to figure things out with Carmelo Anthony and Paul George joining Russell Westbrook in the starting lineup, but consecutive road blowout wins over Milwaukee and Chicago are encouraging signs. OKC, aided by giving up just 69 to the Bulls on Saturday, are fourth in the league in points allowed per game and per 100 possessions, and Raymond Felton’s early-season play coming off the bench has been a pleasant surprise.

Assuming Leonard is back by this point, the first of four games against the Thunder could help determine playoff series and home court advantage among the West’s top four could prove crucial.

With the NBA off for Thanksgiving day, this pre-Turkey day blockbuster is a great way to start the holiday, especially if your out-of-town relatives come in early and need to be occupied.

Kevin Durant wasn’t welcomed warmly in OKC last season, and likely won’t be thankful for the reception he gets on this night, returning for the first time as an NBA champion. It’ll also be the first time the Warriors face the Thunder’s new big three. Except the intensity and energy to be ratcheted up for this one.

We always like to throw a non-national game in here, and the Grizzlies’ 5-2 start is notable because two of those wins have come against Houston and one came against Golden State. Whether Memphis is still healthy and thriving at this point is yet to be seen, but two of the best versatile bigs in the league, the Grizzlies’ Marc Gasol and the Nuggets’ Nikola Jokic, will be one to look out for.

The Sixers always know how to keep things interesting, whether it’s Joel Embiid and Ben Simmons’ great starts on the court, the latest Jahlil Okafor controversy or mishandling Markelle Fultz’s injured shoulder. Philly’s started 3-4 despite a tough schedule including splitting two games with Houston and losing to Washington, Boston and Toronto.

Just having Embiid, Simmons and J.J. Redick on the floor makes the Sixers fun to watch, but doing so against a dynamic team like Washington makes it extra fun. If the game is anything like the Wizards’ 120-115 win over Philly on opening night, we’ll be in for a treat.

It’s criminal that only three of the Bucks’ 13 games in November will be televised nationally. We shouldn’t be deprived of watching Giannis Antetokounmpo, who in October averaged 33.7 points, 10.3 rebounds, 5.1 assists and 1.7 steals per game on 63.2 percent from the field and 40 percent from three.

But to see him go against Damian Lillard, C.J. McCollum and the Blazers almost makes up for us not being able to see an MVP candidate that often. Portland is in the top 10 on both offense and defense, aided by a soft schedule that included two games against Phoenix and one against New Orleans.