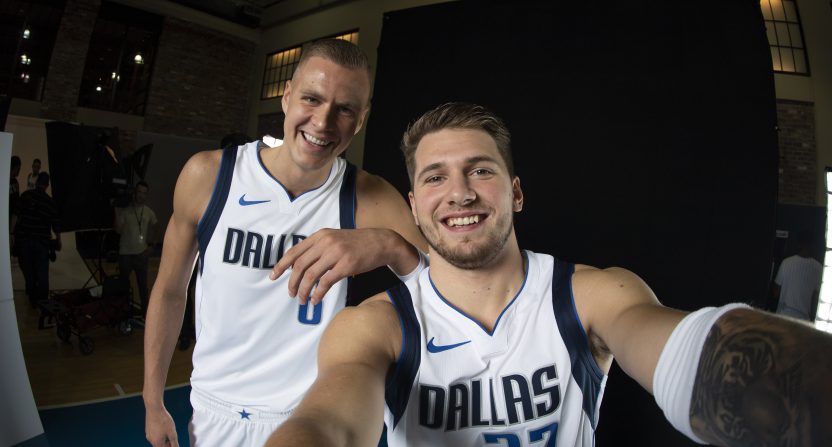 Barring a catastrophic injury to LeBron James or Anthony Davis, the Los Angeles Lakers should reach the playoffs for the first time in seven seasons.

Here are five other teams that could make the postseason after missing out last year:

The Dirk Nowitzki retirement tour is over. You can make an argument that other than LeBron, no single player meant more to an NBA franchise over the past few decades. But it’s time to look to the future, which could be exceptionally bright. The Mavericks return the league’s Rookie of the Year in forward Luka Doncic (21.2 points, 7.8 rebounds, 6.0 assists). Not even LeBron was that productive in his first year. The last guy to put up numbers like that in his rookie season was Oscar Robertson in 1960-61.

Doncic, along with Kristaps Porzingis, form the most intriguing duo in the West. Porzingis, who forced his way out of the dysfunctional New York Knicks, sat out last season with a torn knee ligament he suffered in February 2018. Prior to getting hurt, the 7-foot-3 unicorn was averaging a career best 22.7 points, while shooting 39.5% from three-point range. Porzingis is only 24 years old and has played on some terrible Knicks teams. He’s just scratching the surface and has gained 16 pounds of muscle. If he stays healthy, the Mavericks could be the second-best team in the Southwest Division.

The Dwyane Wade retirement tour is over, and Pat Riley is aging. The 74-year-old Miami president is desperate for one more championship run. This team probably isn’t good enough, but it should be vastly improved. The signing of Jimmy Butler was a big win. Butler and the Philadelphia 76ers came closer than anybody to eliminating Kawhi Leonard and the Toronto Raptors from the playoffs last year. In the season before that, Butler powered the chronically underachieving Minnesota Timberwolves to the playoffs.

The other key will be point guard Goran Dragić, who missed all but 36 games with a knee injury. The 33-year-old was an All Star as recently as 2017-18. The loss of Dragić did allow coach Erik Spoelstra to play Justise Winslow at point guard. There has been speculation that Winslow might start over Dragić. Winslow is younger (23), taller (6-7), and more athletic. But he’s not a better playmaker: Dragić’s career assist percentage is 27.9 compared to Winslow’s 14. The biggest X factor might be Dion Waiters, who was overweight last year. If he plays reasonably well, the Heat could win a playoff series or two.

Chicago had the third-worst record in the league – only three games ahead of the Cleveland Cavaliers (19-63) and Phoenix Suns (19-63), and five ahead of New York (17-65). If the Bulls were in the Western Conference, talk of reaching the playoffs would be laughable. But in the weaker East, they have a legit shot.

The optimism is rooted in a lot of young talent. We don’t know if the Bulls have a superstar, but they have a bunch of solid players. Third-year forward Lauri Markkanen has missed 44 games due to injury in his career. Last season, he sat out the first 23 due to a sprained right elbow. Markkanen has drawn comparisons to Dirk Nowitzki and Kristaps Porzingis. Last February, he showed a glimpse of his ability (26 points and 12.2 rebounds per game, 49% shooting). Chicago adds speedy rookie point guard Coby White, who should help the transition game (the Bulls were 18th in fastbreak points at 12.1). Guard Zach Lavine (23.7) is coming off his best season.

Can Zion Williamson do something that LeBron never did? James was spectacular as a rookie, improving the Cleveland Cavaliers from 17-65 to 35-47. But the team fell one game short of the playoffs. Williamson has a better team, but New Orleans plays in a tougher conference. The 6-foot-7, 284-pounder is unlike any player we’ve ever seen. Williamson brings star power to a franchise that just traded away Anthony Davis. It’ll be fun to see him develop and see if he can make the same highlight plays that memorized us in college.

The good news is that Williamson doesn’t have to do it alone. He’ll have help. Jrue Holiday, a former All-Star, had a career-best season (21.1). The Pelicans acquired solid contributors Brandon Ingram, Lonzo Ball, and Josh Hart from the Lakers in the Davis deal. Ingram has the biggest upside, assuming he’s isn’t sidelined with blood clot issues again. New Orleans also picked up veteran leadership and shooting with JJ Redick, who has already reminded his new teammates that he has never missed the playoffs in his 13 seasons.

The young duo of Karl-Anthony Towns (the No. 1 overall pick of the 2015 draft) and Andrew Wiggins (the No. 1 overall pick of the 2014 draft) was supposed to make Minnesota relevant. But in the four season they’ve been together, the franchise has made one playoff appearance and won one playoff game. It’s hard to blame Towns, who has improved every season and has played 323 out of a possible 328 games. He’s probably the most skilled frontcourt player not named Anthony Davis. Last season, he shot a staggering 53.7 from the field, 39.2 from three-point range, and 83.6 from the free-throw line.

The problem has been Wiggins. Despite having a career scoring average of 19.4, he’s one of the league’s least efficient players. His career value over replacement player rating is minus-1.8. and his career player efficiency rating is 14.5. For perspective, Towns is 19.6 and 25 in those categories respectively. Why should this year be any different? Towns might be good enough to overcome Wiggins’ deficiencies. If Wiggins doesn’t improve, he could be traded.