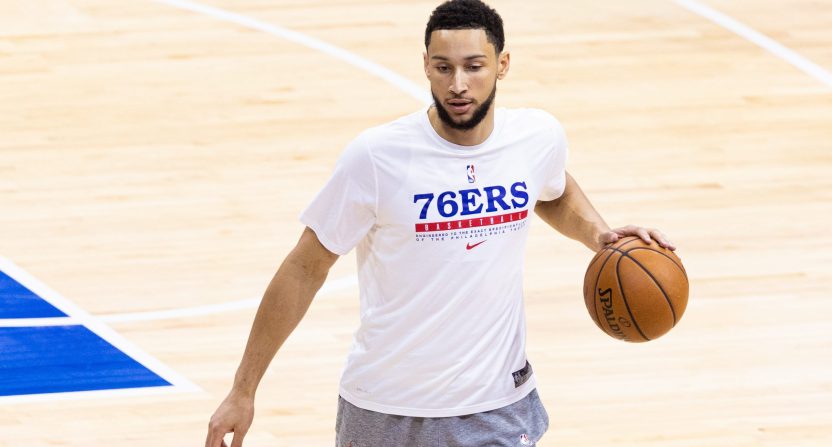 Following a tumultuous sequence of events, beginning with Ben Simmons requesting a trade from the Philadelphia 76ers, the two sides can finally leave their relationship in the past.

According to ESPN’s Adrian Wojnarowski, Simmons and the Sixers reached an agreement to recoup part of his salary that was withheld from him last season. Although the financial settlement between the two is confidential, the franchise reportedly withheld nearly $20 million of his $33 million salary.

ESPN Sources: Ben Simmons and the Philadelphia 76ers have reached a settlement agreement on the grievance the All-Star guard filed to recoup a portion of the nearly $20 million withheld him as a result of his failure to play games in the 2021-2022 season. Story soon.

The 76ers argued that Simmons was in breach of his contract by failing to appear at training camp and refusing to play in games. On the flip side, Simmons, along with his agent Rich Paul, argued that he was sitting out due to mental health issues, adding that the franchise’s pestering only intensified those issues.

Simmons was ultimately traded to the Brooklyn Nets in exchange for James Harden. Despite the change of scenery, Simmons sat out the remainder of the year, including during the Nets’ playoff run while dealing with a back injury that required surgery in the offseason.

It was only natural that there would be a plethora of negative responses from Philly fans, with many believing he doesn’t deserve a single dollar from the franchise.

I wouldn’t give @BenSimmons25 two cents in a settlement with the aggravation that fraud caused the #Sixers. https://t.co/Ubhp8G6rmu

You better believe the Ben Simmons clause in the next CBA is going to be quite the debate. Already getting my popcorn ready 🍿 https://t.co/Ub2RzAgl78

Simmons as soon as a settlement was reached: https://t.co/fNo9OhynQQ pic.twitter.com/0f5zfijSE0

Prior to becoming Public Enemy No. 1 in Philadelphia, Simmons was a superstar in the city, teaming up with Joel Embiid to form one of the more formidable duos in the Eastern Conference.

Although the talent on the roster was there, the Sixers lacked success in the postseason, failing to reach the Conference Finals with the two of them playing together. After a disastrous performance in the 2021 playoffs and getting a bulk of the blame for the team’s failure against the Atlanta Hawks, the fissure between Simmons and the rest of the franchise was permanently damaged.

According to Stephen A. Smith on Monday’s episode of First Take, Simmons revealed to Smith that he’s ready to go this season.

It’s safe to say that Simmons will always receive an unwelcoming reception from Sixers fans during trips to Wells Fargo Center.