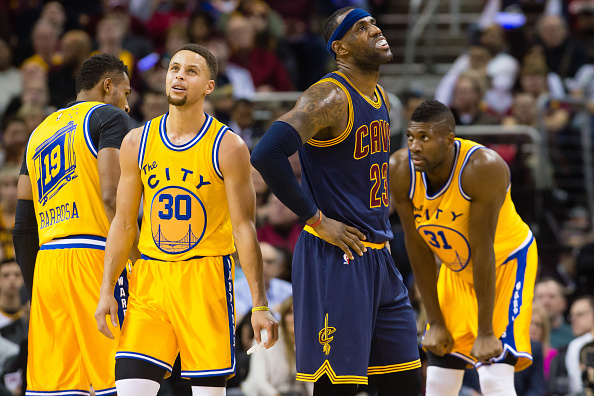 Admit it: The NBA All-Star Game was boring.

We all tuned in for the Saturday night festivities: the dunk contest, 3-point shootout, and the skills contest. Those were and are awesome, and we hold them to the highest standard of any All-Star event among the four major American sports. Something needed to be done to improve what’s supposed to be the main event of All-Star weekend, the game itself.

On Tuesday, the NBA gave us an intriguing solution. The East vs. West format is done. Instead, the top vote-getter from each conference will be named team captain and will pick teams from among the All-Stars chosen by the fans and coaches for February’s big weekend in Los Angeles.

This new format opens up endless, appealing possibilities of matchups and storylines, creating or re-igniting feuds, beefs, battles and rivalries among the league’s elite players. We decided to imagine some of the most intriguing 2018 All-Star matchups.

When it comes down to playground-style games, people like to pick their friends. It would be no different here!

How badly would Russ want this?

Though they can’t both be team captains since they’re from the same conference, this will be a major storyline in February if they’re picked on the same, or different, teams. The regular season MVP against the NBA Finals MVP. It still seems like there’s at least a little bad blood between the two, and hopefully that shows up in the WWE-style press conferences that happen the Friday before the game.

Kyrie Irving did not tell James when he asked for a trade out of Cleveland to be the primary offensive option on another team. Those two will meet against one another for the first time on opening night when the Cavs take on Kyrie’s new team, the Boston Celtics.

A Kyrie-LeBron All-Star weekend subplot is going to happen, whether they’re on the same teams or different teams. If LeBron is named a team captain, would he pick Kyrie, or pass on him for a so-called inferior point guard? Would they pass the ball to one another? Lob alley-oops to each other like you would in a regular All-Star game? (Those same questions apply to Westbrook, Durant and many other examples in this article.)

Imagine that a super-viral social media campaign makes Philadelphia 76ers stud center Joel Embiid or Milwaukee Bucks Greek Freak Giannis Antetokoumnpo the leading vote-getter in the East, making them one of the team captains. How fun would it be to see the young guns go at it against the old guard, or first-time All-Stars against the perennials?

They’d probably get walloped by a team of the older guard, but it would be interesting to see them try. It would highlight how many amazingly talented young players the NBA has and would be a glimpse into the future of the game.

Reports on Tuesday indicated that there would be safeguards to prevent this, but it’d so fun to see Curry pick a team of all point guards, bringing in Westbrook, Irving, Paul, Harden, John Wall, Kyrie Irving, Damian Lillard and Isaiah Thomas on the same team. Up against them? A team purely made of true towering big men: Davis, Towns, DeMarcus Cousins, Marc Gasol, DeAndre Jordan, Hassan Whiteside and others.

Let the wings and forwards have the night off and go size and strength against speed and agility. Make the All-Star game great again!

NBA Finals Rematch — Just give everyone except Golden State and Cleveland the night off and let the two teams have at it. The one catch? The teams will be just as they were in June, which means the Cavs will still have Kyrie Irving at point guard, putting on a wine-and-gold jersey one more time.

Warriors vs The Field — How good are the Dubs? Let’s find out by putting them against the best the league has to offer. I’d watch.

Grudge Matches — We’ll find out how Paul and Blake Griffin will fare when they’re not teammates this season, but that’ll be highlighted again in L.A. in February if they’re picked on different teams. Would Lowry and DeMar DeRozan and Wall and Beal go at each other at their hardest if they were pitted against each other?

Those storylines aren’t as provocative as Durant-Westbrook and LeBron-Kyrie, but they’ll be worth watching now that the All-Star game format has changed.