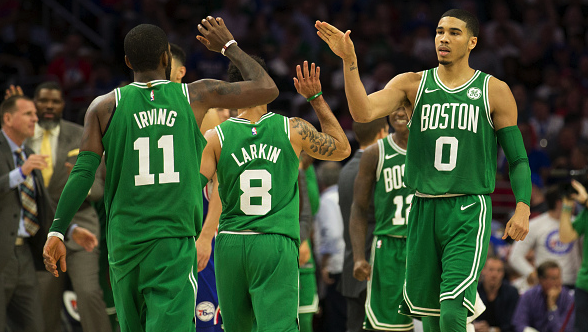 Several notable NBA contenders went through significant roster turnover during last summer’s offseason, including Boston, Cleveland and Oklahoma City. While the Cavs and Thunder are going through some high-profile struggles, the Celtics have reeled off a dozen wins in a row following two season-opening losses to Cleveland and Milwaukee.

So why are the Boston Celtics thriving with so many new players?

It starts, as with most contending NBA teams, on defense. The Celtics aren’t just playing well on the end of the court, they’ve been a freakin’ defensive juggernaut over the last month.

Among the top 10 players in Basketball-Reference’s defensive rating category, the Celtics currently have seven of them: Terry Rozier, Al Horford, Kyrie Irving, Marcus Smart, Aron Baynes, Jaylen Brown and Jayson Tatum (we’ll get to the latter pair a bit later).

ESPN’s Real Plus-Minus ratings for 2017-18 just came out, and Boston’s defense dominated that as well (though the sample sizes are small in some cases).

Marcus Smart is second among point guards in DRPM, just behind Philadelphia’s Ben Simmons. Among 85 eligible point guards, Rozier and Irving are both in the top 15. Brown is fourth in DRPM among shooting guards  and among 83 eligible small forwards, Tatum is 17th. Horford is the top power forward in DRPM so far this season, ahead of reigning Defensive Player of the Year Draymond Green. And at center, Baynes is currently third in DRPM behind Joel Embiid and DeMarcus Cousins.

After Gordon Hayward’s horrific leg injury in the season opener, people wondered how Boston would remain a threat to win the Eastern Conference, especially on offense. Since that conversation occurred, the team has decided to take things slow and dominate on the defensive end. The Celtics are 26th in pace, or possessions per 48 minutes, after finishing 13th last season, per Basketball-Reference, and are taking care of the basketball. Only 14.5 percent of the Celts’ possessions end in a turnover this season, fourth in the league according to Cleaning The Glass.

Three of Boston’s rotation guards have been elite at not turning it over during the season’s first month, something you need to do to succeed when playing at a slower pace where possessions are at a relative premium. Per Cleaning The Glass, Irving is in the 97th percentile among point guards in turnover percentage, at just 8.6 percent. Rozier, who plays 24 minutes per game, is in the 96th percentile among combo guards. And Shane Larkin, who plays about 10 minutes per game off the bench, has the lowest turnover rate among all NBA shooting guards thus far this season (Marcus Morris and Baynes have been very good as well).

Another reason why Boston has been so great this season with so many new players, as opposed to Cleveland and Oklahoma City, is how well the Celtics’ younger players are responding to the increased playing time they’ve received since Hayward’s injury. Brown is third on the team in scoring at 14.7 points and just under seven rebounds per game and is shooting over 38 percent from three. He’s seventh among shooting guards in overall Real Plus-Minus so far, per ESPN.

Tatum has been really good as well as a rookie so far, averaging 13.6 points and nearly six rebounds per game on 48.9 percent shooting from the field and 47.6 percent from three, a mark that’s currently 13th in the league. Tatum is ninth among eligible small forwards in overall RPM. Rozier’s learning curve has been slower than Brown’s and Tatum’s, but the 23-year-old third-year combo guard has been excellent defensively and has hauled in 5.4 rebounds per game, which is seventh among point guards according to ESPN.

And unlike the Thunder, who have failed to effectively incorporate Carmelo Anthony and Paul George alongside Russell Westbrook (the shade being thrown at Melo on social media for this is real and abundant), Irving has incorporated himself really well into the rest of this Celtics team alongside Horford, Smart and the aforementioned younger players. After finishing ninth in the league last season in usage rate at 30.8 percent, per Basketball-Reference, he’s down to 16th in the league this year at 29.2 percent. His scoring has taken a dip with fewer shots and minutes played, but his defensive numbers are way better and he’s taking care of the ball at elite levels so far.

To quickly recap, Boston has the league’s best record so far despite heavy roster turnover and the loss of its second or third-best player to a devastating injury. And Brad Stevens’ bunch has accomplished that with the league’s top defense, players who take care of the ball and excellent contributions from its younger core. If the Celtics can sustain this level of play, they’re going to make a strong case that they should be the favorites in the Eastern Conference, ahead of LeBron James’ subway-riding Cavaliers.