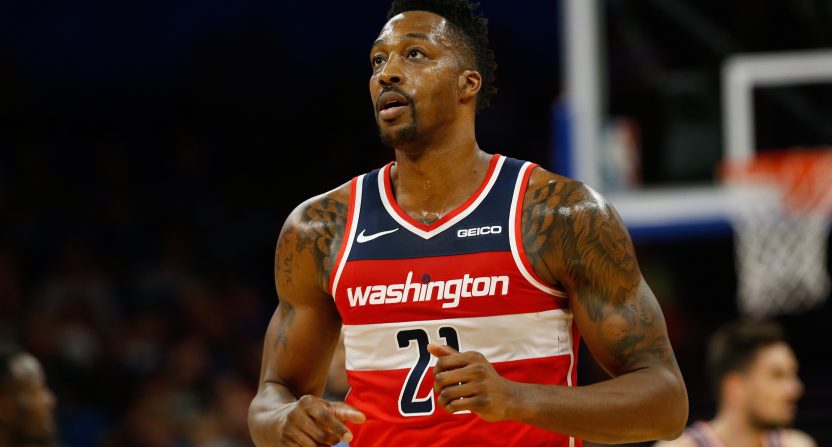 The perception of Dwight Howard isn’t a complete picture. For almost a decade, he was dominant and mostly likable. But now, Howard is viewed somewhat unfairly as a punchline.

He might have a shot at changing the narrative. According to Shams Charania of The Athletic, there’s mutual interesting in Howard reuniting with the Los Angeles Lakers. Howard is under contract with the rebuilding Memphis Grizzles, but is expected to be either released or traded. ESPN’s Brian Windhorst thinks a reunion is unlikely, but Adrian Wojnarowski reported that the 6-foot-11, 265-pounder will work out for L.A.

Each side would have something to gain here. The Lakers would get badly needed frontcourt help following last week’s season-ending knee injury to DeMarcus Cousins. Howard, 33, is a journeyman at this point in his career. He has played for four teams over the past four seasons and missed most of last year due to a gluteal injury. But most importantly for Howard, he could change the narrative that has dogged him the latter half of his career.

That he’s a bad teammate, selfish, and a phony.

Howard isn’t the first NBA superstar to not get along with coaches and teammates, and suffer poorly received public moments. Some of his image problems have been self-inflicted. But they have overshadowed Howard’s greatness – before injuries and the three-point evolution lessened his impact.

During his time with Orlando– from his rookie season to his final season, Howard was the league’s top center. With the Magic, he was a first-team All-NBA selection five times and a Defensive Player of the Year three times, and led the league in rebounding four times and blocked shots twice. He playfully donned a Superman jersey while winning the 2008 All-Star Slam Dunk Contest.

Howard powered the Magic to the 2009 NBA Finals at the age of 23 when his best teammate was arguably Hedo Türkoğlu. While the team lost to the Lakers 4 games to 1, the future looked bright. Howard was one of the league’s most popular players, ranking fifth in jersey sales the following season. Howard was also in a Super Bowl commercial with LeBron James – an homage to classic commercial starring Magic Johnson and Larry Bird.

Where did it all go wrong? Well, you could point to the infamous Stan Van Gundy press conference in April 2012 when the Magic coach confirmed a report that Howard wanted Van Gundy fired. What made it weirder? After the big reveal, a smiling Howard suddenly appeared next to Van Gundy and hugged him.

Howard was totally unaware of what had just been said.

The optics for Howard were terrible and the video went viral. The footage played a significant role in tarnishing Howard’s image. He was so insincere. No one looked at him the same way again. Years later, Howard described that moment as the “worst day of my life.”

Van Gundy was eventually fired as Orlando attempted to placate its franchise star. Howard was set to be a free agent in the summer of 2013, and the team was doing everything possible to keep him. Orlando once lost Shaquille O’Neal, and didn’t want to lose another generational big man.

But Orlando did. Knowing that Howard wasn’t going to sign a contract extension, the Magic traded Howard to the Lakers. In Los Angeles, Howard was supposed to be a part of an All-Star foursome with Kobe Bryant, Steve Nash, and Pau Gasol. That didn’t happen. Injuries, combined with Howard bickering with Bryant and the coaching staff, led to a 45-37 record. Coach Mike D’Antoni clashed with Howard contributing to Howard’s reputation as a “coach killer.”

Howard — tired of being the fall guy — left Los Angeles as a free agent, signing with the Houston Rockets. He was supposed to team-up with James Harden to form a dynamic duo. But something unexpected happened. The league was changing, becoming more perimeter-oriented. You no longer needed a dominant center to win a championship. The three-point revolution spurred on by the Golden State Warriors took over the NBA. Howard, affected by years of back trouble and age, became sort of a relic.

Howard can still rebound – literally and figuratively. Two years ago, he was third in the league (12.5) while playing 81 games. Still, every team that has acquired him in recent years has given up on him after one season. Why? Is Howard that much of a cancer? You don’t find guys like Howard available in the discount bin unless there’s a significant issue.

The risk for the Lakers is minimal. Howard would be at best the fourth option on offense, behind LeBron, Anthony Davis, and Kyle Kuzma. He just needs to be an effective center, allowing Davis to play power forward. Howard isn’t as skilled as Cousins, but he should be an upgrade defensively. If Howard can help the Lakers make a run to the NBA Finals, he’ll receive the adulation he’s been searching for.

The last time Howard was in a playoff game with the Lakers he was ejected after a second technical. The Spurs swept L.A. in the first round.

Wouldn’t it be something if Howard’s last playoff game in 2020 was in the NBA Finals?