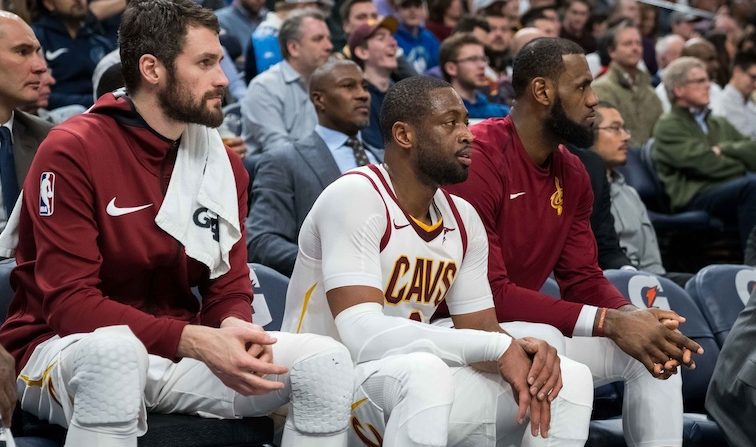 It’s been tough sledding for the Cleveland Cavaliers of late. At the midway point of the 2017-18 season, the defending Eastern Conference champions are struggling.

Since losing to the Golden State Warriors in a Christmas Day showcase (granted, an arbitrary point on the schedule), the Cavs have lost seven of nine games. That span also includes back-to-back losses of 25 or more points, the latter of which compelled LeBron James to chastise his teammates for their defensive effort. The skid has dropped the Cavs to third in the conference standings, and the Indiana Pacers are only 2.5 games behind Cleveland in the Central Division.

Naturally, the media covering the Cavs wants to know what’s currently wrong with the team. With each subsequent loss, the questions become louder and more prevalent, and the players can’t avoid them when talking to reporters after the game.

But what if those players do want to talk about how poorly the team is playing, yet don’t want their names attached to whatever criticisms and gripes they have. Apparently, the Cavs’ solution is to talk to a handful of outlets off the record. ESPN and reporter Dave McMenamin was one of those outlets who were given that opportunity following Cleveland’s loss to the Warriors on Monday.

From his ESPN.com article:

“Several prominent players, speaking on condition of anonymity to ESPN, Cleveland.com and The Athletic, expressed doubt that the problems — an aging roster, defensively challenged personnel and a glut of redundant role players — could simply be worked out through patience and a chance to coalesce when fully healthy.”

Both Cleveland.com’s Joe Vardon and The Athletic’s Jason Lloyd also confirmed that important players shared concerns over what currently plagues the team being beyond repair, whether through the front office making deals or the roster being restored to full health.

Vardon also quoted a league source who noted the current problems with the Cavs.

“Rotations are awful. IT (Isaiah Thomas) is so much worse than Kyrie defensively it’s insane,” said a league source. “There is not a great feeling anywhere. They need to limp into the All-Star break and get away from each other.”

McMenamin also pointed out that comparisons are being drawn in the Cleveland locker room between Thomas and Irving. To be fair, Thomas is still recovering from a hip injury that sidelined him until Jan. 2. He’s only played in five games thus far, so whatever problems the Cavs have had — such as a defensive rating currently rated 29th among the 30 NBA teams — were in place before he returned to the lineup.

But when Irving plays the same position and has led the Celtics to the best record in the East, you can see how grumblings might develop. And a revolt would ignite if any teammates called Thomas out publicly.

Yet these players have gone public; they just haven’t put their names to their remarks. None were directly quoted by ESPN, Cleveland.com or The Athletic, either. Again, off the record.

It’s notable that the Cavs players chose the outlets who cover the team regularly. Out-of-town publications and national reporters swooping in for a story apparently didn’t get any consideration for candid, albeit anonymous, conversations on the team’s current struggles. Surely, it’s a matter of trust. Those reporters have a rapport with the players, but it would also be easier to find out who leaked names if that information ever got out.

Some might criticize the three outlets for granting an off-the-record forum to those Cavs players, who are presumably stars and locker room leaders. But these developments are news and had to be reported, even if no one would put a name or direct quote to their opinions. And if tensions really are that bad in Cleveland, such information might not be able to be kept off the record for long, anyway.