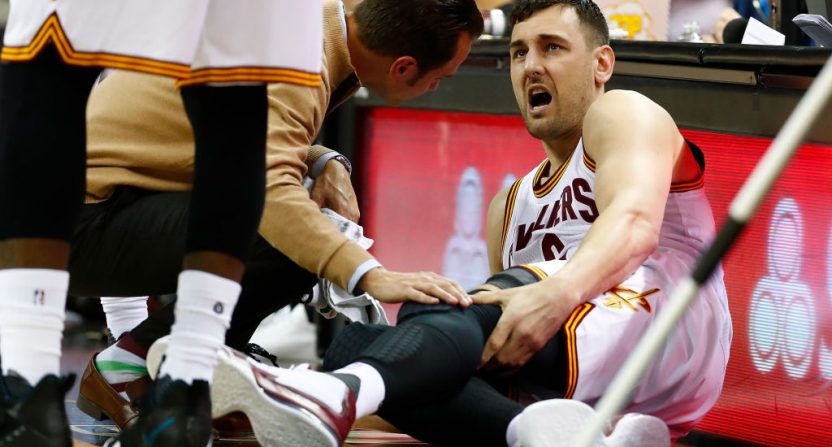 In desperate need of some help at the center position, the Cleveland Cavaliers signed Andrew Bogut shortly after he was waived by the Philadelphia 76ers near the end of February. On paper, Bogut seemed to fit perfectly with the Cavs.

Cleveland envisioned Bogut coming off the bench and giving some much needed relief for Tristan Thompson, who the Cavs had been relying on too heavily at the center position all season. Cleveland often plays a smaller lineup with Kevin Love and Channing Frye in the frontcourt, which is more offensively focused, so having a center like Bogut, who could protect the rim and set solid screens in a limited role seemed ideal for the Cavs. But unfortunately, it looks like the potential positive impact Bogut could have made on the Cavs won’t be happening, as minutes into his debut with Cleveland, the veteran center broke his left leg.

Bogut’s tenure with Cleveland is now likely done and the Cavs are back to square one with basically no depth at center. Last season’s backup center Timofey Mozgov is no longer there, and Chris Andersen was traded for to clear up cap space after he suffered a season-ending injury.

The Cavs have played well without depth at center, though. Relying on Thompson and the smaller lineup with Love and Frye has been quite advantageous and is just one reason why the Cavs are the No. 1 team in the Eastern Conference. Also, LeBron James hasn’t openly advocated for another big man. He wanted a playmaker and the Cavs were able to fulfill his wish by signing Deron Williams. So if James, the team’s leader and superstar, isn’t complaining, then perhaps the Cavs can continue to be successful without a true center coming off the bench.

But Love is currently injured and likely will take some time to get readjusted when he returns. Also as the Bogut injury shows, anything can happen, so perhaps the Cavs should look to find a replacement backup big. However, the main problem with this line of thinking is that there aren’t that many qualified candidates for the Cavs to add at this point in the season.

Cleveland could take a gamble on bringing back Larry Sanders, who reportedly worked out for the team recently and is attempting to make an NBA comeback. However, Sanders hasn’t played in the NBA since the middle of the 2014-2015 season. But if he is able to approximate the defense he was known for when he was playing, then Sanders could be a solid pickup for the Cavs. That is a big if though, especially since Sanders has worked out for a number of teams besides the Cavs and (so far) no one was willing to take a change.

Besides Sanders, the Cavs could look at signing Jared Sullinger, who was recently traded from the Raptors to the Suns and then immediately waived. Sullinger has been injured all season, is not that great on defense, and isn’t a true center. But Sullinger is a big body, can rebound, and, at the very least, can give Thompson some relief. Plus he is from Ohio, which could be a nice homecoming story for fans.

Anderson Varejao is another option as well. After spending the majority of his career with the Cavs, he has familiarity with the team and is beloved by fans and players alike. But Varejao may be the worst fit, as he was absolutely miserable in last year’s Finals for the Warriors and his athleticism is essentially gone.

Clearly, there aren’t many good options for a backup center for the Cavs. Cleveland may just stand pat and attempt to defend their championship relying on their current roster. But overall, Bogut’s injury shows how nothing is guaranteed in the NBA, even for teams near the top of the league.