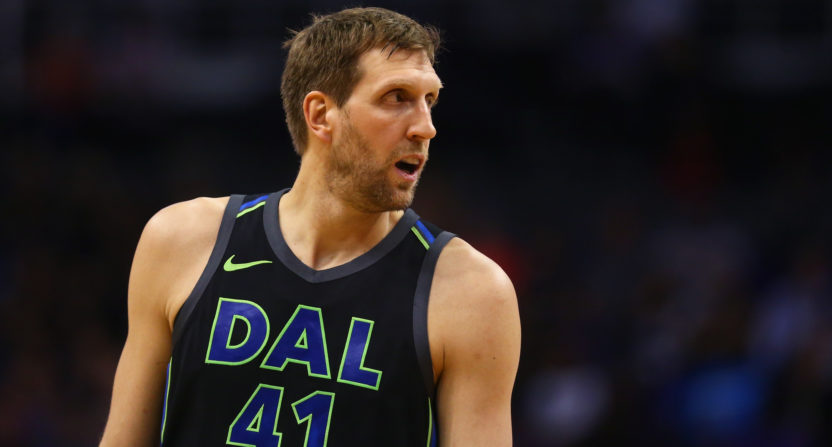 An in-depth report from Sports Illustrated on Tuesday night detailed a “corporate culture rife with misogyny and predatory sexual behavior” within the Dallas Mavericks’ organization.

The report elaborately describes sexual harassment accusations made by female Mavericks employees against former team president and CEO Terdema Ussery, and the repeated inaction on harassment complaints by the organization’s human resources department.

Additionally, the article details multiple domestic violence allegations against Earl K. Sneed, the beat writer for the Mavericks’ official website until he was fired on Tuesday night after the SI report was published. Sneed kept his job even after being arrested for domestic violence at the Mavericks’ facility during the 2010-2011 season, before pleading guilty to the charges in 2012. Then in 2014, Sneed was dating a Mavericks female employee, and allegedly hit her. The woman told Mavericks’ head of HR Buddy Pittman about the incident. And still, Sneed kept his job.

Well, longtime Mavericks star Dirk Nowitzki was asked about the allegations on Wednesday night, and the future Hall of Famer said he was “digusted” and “shocked” after reading the SI report. He added that he’s “glad” the allegations are all coming out.

Dirk Nowitzki on the investigation of the Mavs: "It’s very disappointing. It’s heartbreaking. I’m glad it’s all coming out. I was disgusted when I read the article, obviously, as everybody was. I was shocked … that our franchise, my franchise, that stuff like that was going on"

Nowitzki, 39, has spent his entire 20-year career with the Mavericks’ organization.

In the SI report, there’s an excerpt quoting a former female Mavericks staffer speaking well of the players. The woman said that the Mavericks’ players “always knew how to treat people,” but she’d “go to the office and it was this zoo, this complete shitshow.”

While sources referred to the Mavericks office as a “locker room culture,” the team’s actual locker room was a refuge. Says one female former senior staffer: “I dealt with players all the time. I had hundreds of interactions with players and never once had an issue…they always knew how to treat people. Then I’d go to the office and it was this zoo, this complete shitshow. My anxiety would go down dealing with players; it would go up when I got to my desk.”