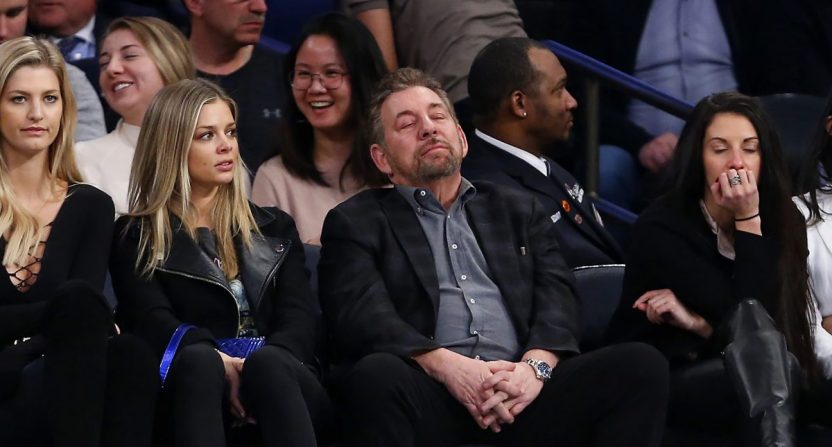 Many people don’t like New York Knicks and Rangers owner James Dolan. Dolan has been a consistent embarrassment in the sports and music industry for around a quarter-century so many fans, former players, and employees have reason to not like him.

This time, some employees are reportedly meeting about Dolan’s latest screwup. Ever since George Floyd was killed and the ensuing protests against police brutality on black people, Dolan’s teams have been silent. In fact, neither team has tweeted or posted on Facebook since Saturday. Yesterday, MSG employees were sent a memo from Dolan that explained why he wasn’t going to make a public statement and according to ESPN’s Pablo Torre, “dozens of MSG employees” are discussing the memo in a non-player employees meeting.

I have just been told that dozens of disgruntled MSG employees are currently meeting, without Jim Dolan, to discuss Dolan's internal memo and position on this subject. It's the equivalent of a players-only meeting, except it's the non-player employees meeting. https://t.co/1Cm8DR4YDQ

The Knicks and Spurs are the only two NBA teams who haven’t posted statements but it’s a bit unfair to lump the Spurs in with the Knicks. Spurs head coach Gregg Popovich recently shared his thoughts to The Nation and the Spurs are participating in “Blackout Tuesday.” But the Knicks as an organization, other than players like Dennis Smith Jr. participating in protests, haven’t really done anything.

If Dolan was expecting this internal memo to remain internal, then who knows what he was thinking there. Owning any corporation with hundreds of employees, someone within the team is going to leak a company-wide memo to the public, especially for a tone-deaf statement like that.

Dolan expressed that “we are not any more qualified than anyone else to offer our opinion on social matters.” And while there can be some truth and honesty to that, maintaining a willful ignorance isn’t the answer either. This is the time to learn and get qualified to discuss these things. Dolan owns a sports team where most of the players are black and many fans are black. He would be wise to maybe listen to them for once and come up with a better plan than whatever it is he thinks is a smart strategy.