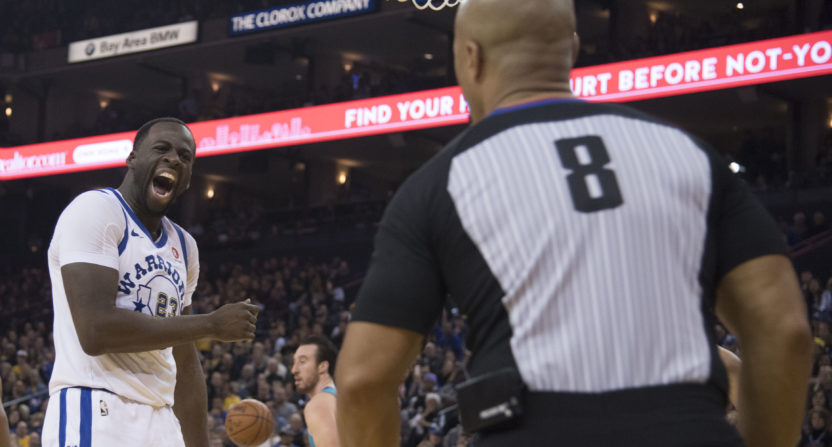 On Saturday, Warriors forward Draymond Green picked up his NBA-leading 11th technical foul, after objecting to a no-call on a dunk attempt. After the game, he vented to The Athletic about league referees, alleging that they have made things personal with star players and should perhaps be replaced en masse.

Via The Athletic, here’s what Green had to say.

“It’s bad,” Green told The Athletic. “It’s horrible. It’s really bad. I don’t know why it is. But I think it’s ridiculous. It’s ruining the game. … It should be one of, if not the main priority, to be solved. It definitely should.”

Green has grown so frustrated with the situation that, when asked for a possible solution, he threw out a radical idea.

“They can get a new crop (of referees), a whole new crop,” Green said. “Too many personal things going on. Too much me against you. It just don’t work that way.”

Officiating has been a subject of complaint across the NBA this season, as LeBron James, Kevin Durant, Steph Curry and Anthony Davis have earned ejections and Warriors point guard Shaun Livingston wound up suspended over an incident with referee Courtney Kirkland (who was also suspended). Green, never known for restraint of good behavior, was himself ejected from a game on December 30 and now stands five technicals away from an automatic suspension. Referee-player tension has become serious enough that NBA Players Association head Michele Roberts met with a representative from the National Basketball Referees Association last month to discuss the issue.

But even if Green, speaking in the heat of the moment Saturday, has a point about officiating issues, his solution is probably not a good one. Only a few years ago we saw what happens when a sports league replaces its refs all at once, and that sure as hell wasn’t pretty.