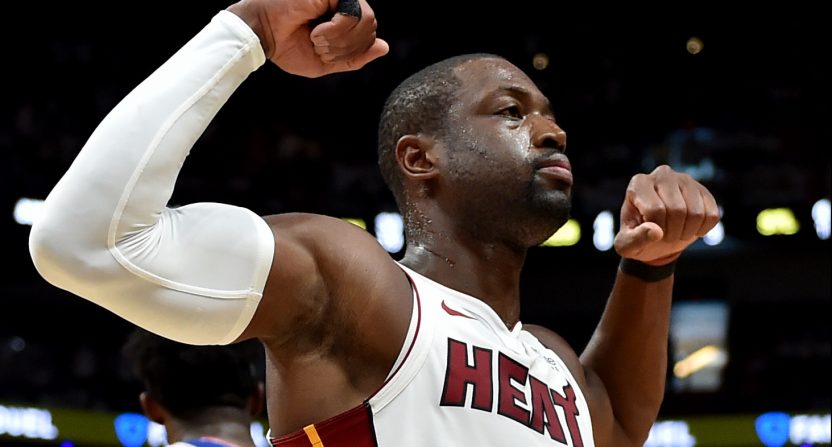 When Dwyane Wade was traded back to the Miami Heat from the Cleveland Cavaliers this past season, he told reporters that the franchise where he found his greatest successes would be the last one he ever plays for the in NBA. That’s almost certainly true as the one-year contract he signed before the season is now done. However, it doesn’t mean he’s done playing professional basketball someplace else.

ESPN is reporting that, according to Chinese media reports, Wade has been offered a three-year, $25 million contract by the Zhejiang Golden Bulls in the Chinese Basketball Association. If he did accept the offer, it would make the 36-year-old the highest-paid player in China, ahead of Andray Blatche, who currently plays for the Xinjiang Flying Tigers. It would also be one of the biggest contracts ever handed out to an international basketball player, trailing only the $6 million after taxes that Josh Childress received from Olympiacos in 2008.

Besides the money, what incentive would Wade have to spend the next three years in China? For one, he just signed a lifetime contract with Chinese apparel company Li-Ning. His latest shoe with the company, the “Way of Wade 7,” was unveiled in Beijing on Wednesday. Wade has been working with the company since 2012 and his new deal calls for him to take “a greater role” in youth developmental camps and basketball clinics in China in the next few years. In a way, playing in China while also fulfilling his role with Li-Ning seems like good business sense.

It doesn’t mean Wade might not return to Miami for another season. The Heat, who are currently above the NBA salary cap, can offer Wade $5.3 million to come back, which means he’s going to have to figure out if it’s better to take the money and head east, where he’ll be the star attraction, or stay put so he can cap his Miami legacy.