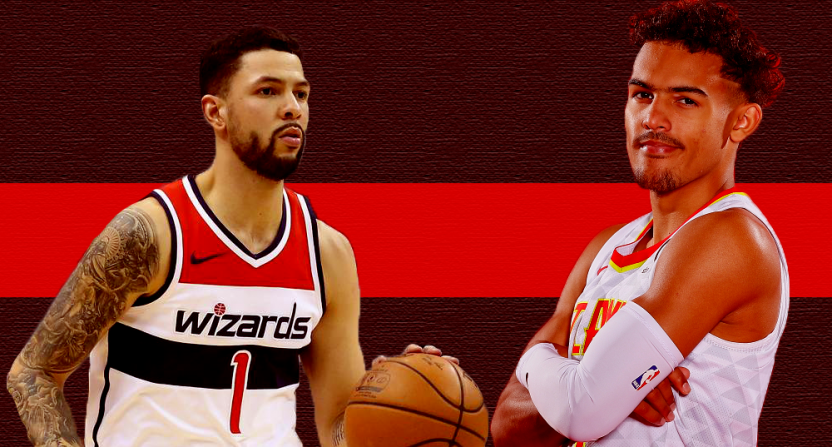 Making trades is a tough business in pro sports, and in the aftermath of every trade, fans and writers alike want to declare a winner and loser for every deal. At nearly the halfway point of the NBA season, it’s easier to assess deals made earlier in the year, some which haven’t worked out. Here are five trades teams might considering doing over if given the chance.

The trade: The Atlanta Hawks trade the third overall pick (guard/forward Luka Doncic) to the Dallas Mavericks in exchange for the fifth overall pick (point guard Trae Young) and a protected 2019 first-round pick.

Look, I get what the Hawks were trying to do here. Getting a point guard to build around and adding another asset from Dallas to go down two spots in the draft isn’t bad in theory. However, Doncic has been a star since day one and is, without question, the best player to come out of the 2018 NBA Draft.

Doncic is a crafty player who can play anywhere on the court. Blessed with size (6’7″) and remarkable court vision for a 19-year-old, Doncic has made it look easy in his first season with the Mavs.

In 39 games, Doncic is averaging 19.6 points, 4.9 assists, and 6.7 rebounds, while shooting 43 percent from the floor and 37 percent from three. He’s a joy to watch and will probably be an All-Star as soon as this year.

Young, who’s actually older than Doncic, overcame a brutal start to show flashes of an above average scorer with impressive passing ability. However, both his potential and current on-court production pale in comparison to Doncic’s. The move will sting Hawks fans for years to come.

The Orlando Magic played part of 2017-18 without a capable starting point guard after dealing Elfrid Payton to Phoenix and didn’t address the issue in the draft. So when the Magic decided to complete a three-team trade with the Hornets and Bulls to bring in Jerian Grant, the team put a band-aid on a bullet wound.

Orlando sits six games under .500 at 17-23, largely thanks to non-starters like D.J. Augustin at the point, with Grant (averaging just 4.1 points per game) and undrafted rookie Isaiah Briscoe eating up minutes as the backups. Thankfully, the team’s got talented passing bigs in Aaron Gordon and Nikola Vucevic, but that doesn’t negate the fact the team uses three backup point guards who aren’t great facilitators. Augustin and Grant haven’t produced at a league average rate, leaving the Magic to screw around with their lineup, even shifting small forward Jonothan Simmons to floor general with mixed results.

If Orlando, currently 10th in the East, doesn’t make the playoffs, they can look back at their failure to address the point guard position as a key reason why. Grant wasn’t the answer. Heck, he wasn’t even a band-aid.

The trade: The Oklahoma City Thunder receive point guard Dennis Schroder and guard Timothe Luwawu-Cabarrot from the Atlanta Hawks in exchange for forward Carmelo Anthony and a protected 2022 first-round pick.

I might get crap for this one. Dealing Melo was a big move for the Thunder, but in order to get rid of Anthony’s contract with one-year remaining at $27 million, OKC took on Schroder and gave up a protected pick down the line. So what’s so bad about that? Schroder might be the NBA’s most overrated player.

After an incredible start where he averaged 18.2 points in December, Schroder has cooled off big time. Playing as the backup point guard behind Russell Westbrook, the 25-year-old still can’t shoot and doesn’t play defense. He’s a stat stuffer who likes to get his shots up regardless of what’s best for the team, and that’s without even touching his off the court issues. On the season, Schroder is shooting a career-worst (besides his rookie season) 40 percent from the field and is hitting just 31 percent from deep. His numbers have also dipped dramatically in the new year. Schroder has moments of explosiveness and can still have an impact off the bench, but his inefficiency is problematic and he disappears for long stretches.

Owed $31 million beyond this season, Schroder’s got a sneaky bad contract. OKC enjoyed the immediate payoff, but the real Schroder is starting to appear.

The trade: The Philadelphia 76ers trade center Richaun Holmes to the Phoenix Suns for cash considerations.

Holmes, one of the last holdovers from the Sam Hinkie era, didn’t exactly tear it up in his last year with the Philadelphia 76ers before getting dealt to Phoenix in the offseason for practically nothing. But the 25-year-old power forward has been fantastic for a Phoenix team desperate for depth at the five. Holmes has provided hustle and energy, averaging 7.8 points, 4.4 rebounds, and 1.2 blocks in just 15.6 minutes while shooting 67 percent from the field. He’s not going to be an All-Star, or even a starter, in the future, but Holmes has shown he’s got a role as one of the Suns’ most important bench contributors.

Meanwhile, the 76ers bench ranks 29th in rebounding this season. Amir Johnson, who the 76ers opted to keep instead of Holmes, looks finished. There’s not much help at the position, especially if (God forbid) something happens to Joel Embiid.  Philadelphia gets knocked here for giving up a young(ish) player they could have used for free, and Holmes would have been a great insurance policy.

The trade: The Washington Wizards trade center Marcin Gortat to the Los Angeles Clippers in exchange for Austin Rivers.

This one’s simple. Washington gave up their reliable longtime starting center for Rivers, a tweener guard who didn’t even shoot 40 percent from the field before he was traded again and waived. The Wizards foolishly bet Dwight Howard would be the solution at the five, but the former All-Star has only appeared in nine games thanks to injury.

Gortat would have been a safe choice to keep around, and Washington knew what they would have gotten out of him. He’s a steady producer who hasn’t missed a game in two straight seasons. He plays with a physical edge that the Wizards are missing right now.  He isn’t afraid to mix it up and you can never question his effort. Sure, center Thomas Bryant has posted surprisingly promising results in the last month in largely meaningless games when starting, but the Wizards’ season tanked as soon as Howard (somewhat predictably) went down. Without Gortat, the team’s depth has been badly exposed, and they should have kept him.