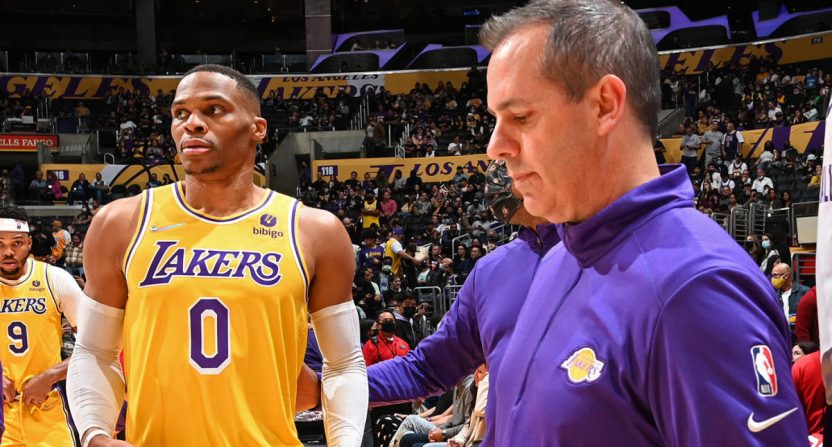 The Los Angeles Lakers have been one of the most disappointing teams of the NBA season up to this point, and it is clear that changes need to be made in some fashion going forward.

Tensions within the organization may have reached a boiling point in last night’s loss to the Indiana Pacers, who are sitting well below .500 with a 16-29 record.

Lakers head coach Frank Vogel made a bold move trying to spark some offense for the Lakers last night by benching star point guard Russell Westbrook late in the fourth quarter. Westbrook has been at the head of the Lakers’ criticisms so far this season, sitting at only 18.5 points per game, his worst statistical year in that category since his second season in the league.

The Los Angeles Lakers organization has recently told Frank Vogel that he has the green light to coach Westbrook as he sees fit and that the organization would back him on his decisions regarding Westbrook. It appears that he took the message loud and clear, as he didn’t play Westbrook for the final 3 minutes and 52 seconds of a game still in reach for the Lakers.

When Vogel was asked post-game why Westbrook wasn’t in the game for the finish, he had this to say.

“Playing the guys that I thought were gonna win the game.”

This makes it pretty clear that at least in this game, Vogel didn’t see Westbrook as a piece that could help the Lakers win.

It appears that the Lakers are certainly an unsteady team. There are rumors of Frank Vogel being fired at some point this season, and this may not help things. Westbrook was obviously upset with the decision, as he did not appear at the post-game press conference to answer questions.

The Lakers were a team that many thought would be the front runners to be NBA championship title contenders this year, and now it will be a question if the team can get it together to even be a playoff team by the end of the year.