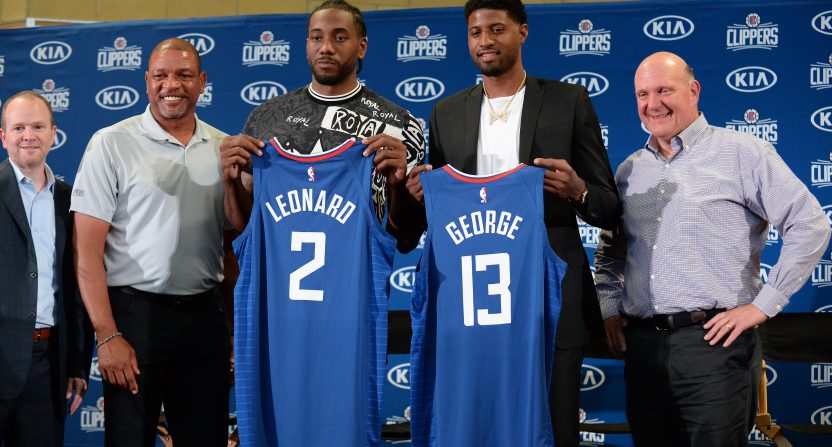 Believe it or not, NBA camps open this weekend and the first preseason game is next week. Brace yourself for what appears to be the most wide-open season since Michael Jordan’s (first) retirement right before the 1993-94 season.

You can make an argument for six teams to win the title. The last time we’ve seen this kind of uncertainty was when Jordan shockingly quit the sport after winning three straight championships. That power void allowed the New York Knicks to finally reach the NBA Finals and the Houston Rockets to win its first NBA title.

How did we get here? An unprecedented summer of player movement. Twelve current or former All-Stars changed teams, including two former regular-season MVPs (Russell Westbrook and Kevin Durant) and a two-time Finals MVP (Kawhi Leonard). And we might not be done. Three former All-Stars could be on the move: Chris Paul, Kevin Love, and Andre Iguodala. They’re no longer elite, but they could be the missing piece for a contender.

The league’s biggest championship stars switched teams: Leonard bolting from the NBA champion Toronto Raptors to the Los Angeles Clippers, and Durant leaving the Golden State Warriors for the Brooklyn Nets. And while Durant will sit out this year due to an Achilles injury, his exit coupled Klay Thompson’s knee injury (out until possibly March) have weakened the Warriors who are gunning for their sixth straight NBA Finals appearance.

Be prepared to stay up late. The intrigue is in the Western Conference, particularly in Los Angeles. Leonard declined to join LeBron James and Anthony Davis. Instead he has his own title aspirations in the same building that LeBron also calls home.

Here’s a look at the top six contenders:

The Clippers have historically been a second-class citizen in L.A. As exciting as the Lob City days of Chris Paul, Blake Griffin, and DeAndre Jordan were, that team underachieved. These Clippers have everyone’s attention.

Leonard has already proven he can win a championship with Kyle Lowry as arguably his second-best player. In L.A., he’ll upgrade with Paul George as his running mate. But the Clippers have concerns. George enjoyed a career-best season, but struggled down the stretch with a shoulder injury. If he’s not the player he was last year, that’s a problem. However, their depth is impressive, led by Sixth Man of the Year Lou Williams.

The Lakers could have the league’s best 1-2 punch with LeBron and Davis. Davis is arguably the best teammate LeBron’s ever had. But by waiting so long for Leonard’s decision, the Lakers missed out on other key free agents. Their margin for error is thin because the roster is thin. Any missed time by LeBron and Davis would be catastrophic.

LeBron turns 35 in December and is clearly on the decline. His groin injury completely undid the Lakers season last year, as he played a career-low 55 games after playing all 82 the previous season and single-handedly dragged the Cleveland Cavaliers to the 2018 NBA Finals. Davis played only 56 games last year. Even if Kyle Kuzma makes a sizable leap, the Lakers will need all hands on deck to compete with the Clippers.

The Rockets have possibly the most combustible duo in the West. Yes, James Harden and Russell Westbrook played well together when they were teammates in Oklahoma City. But 2012 is a long time ago. They’re both different guys now: high-usage former MVPs who are challenging to play with. It’s hard to see their reunion resulting in a championship. One will have to take a reduced role. Chances are it will be Westbrook. Can he play off-the-ball effectively when he’s statistically the WORST three-pointer in NBA history (30.8%)? And will Harden be willing to cut back on his minutes so he’ll be fresher for the playoffs?

The Warriors won a record 73 games in 2015-16 without Kevin Durant. But this is the weakest they’ve been in years. Losing Durant is one thing, but Thompson’s injury robs them of one of the top two-way players. To fill the gap, Golden State acquired D’Angelo Russell who is coming off a career season with Brooklyn. He might be able to replace Thompson’s offense, but he’s not as good defensively. The Warriors struggled to guard the perimeter last season and they’ll probably be even worse this year. But this is still a team with Steph Curry and Draymond Green. Will that be enough? At least Golden State will enjoy its new arena.

The Bucks had the best record in basketball and have the reigning MVP in Giannis Antetokounmpo. They could easily wind up with similar results in a weaker Eastern Conference. Antetokounmpo is terrifying with his ability to get to the basket against anyone. If he ever develops a better three-point shot (a career 27.7 percent-shooter), he’ll be the most unstoppable offensive force in the league. But the Bucks might have made a mistake by losing guard Malcolm Brogdon in a sign-and-trade deal to the Indiana Pacers. Last season he became just the eighth player to shoot 50 percent from the field, 40 percent from three, and 90 percent from the foul line.

The 76ers were a few plays away from eliminating Kawhi Leonard’s Toronto Raptors. Instead the bounce seen around the world sent them home. Philadelphia should be one of the best defensive teams in the league, keyed by Joel Embiid and the additions of Al Horford and Josh Richardson. However, this team might be worse offensively with the losses of JJ Redick and Jimmy Butler. Redick’s shooting opened up the floor for Embiid. And Butler was a go-to basket getter in the playoffs. Who’s going to take the final shot in clutch situations? Point guard Ben Simmons got a new contract but his refusal to even attempt a 3-point shot (0 for 17 in his 160-game career) will continue to limit him.