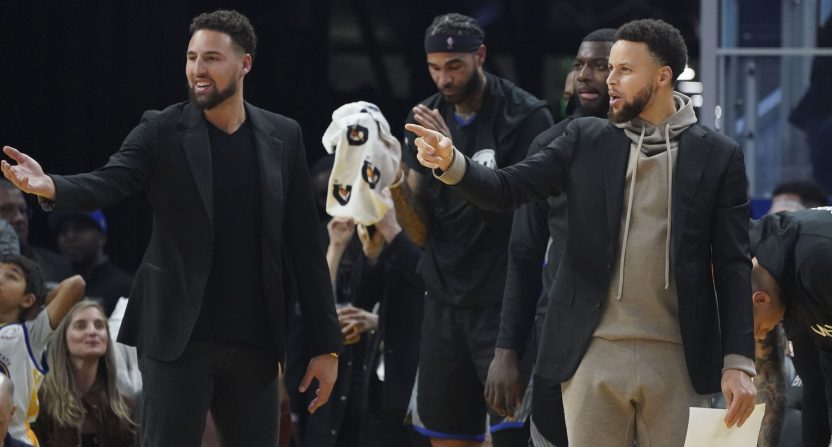 When last we saw the real Golden State Warriors, they were crumbling like a sandcastle. No NBA team has been decimated more by injuries over the past 14 months. They went from arguably the greatest squad ever assembled (thee championships over four years) to the league’s worst record (15-50). But the final chapter has not been written. There is hope.

Golden State will be the NBA’s most intriguing team in the 2020-21 season. Three All-Stars return from injury: Stephen Curry, Klay Thompson, and Draymond Green. The Warriors have a $17.2 million trade exception they can use to add a veteran. Plus, they own the No. 2 overall selection in the 2020 NBA Draft. Whether they keep the pick or trade it for another All-Star, this team will have a shot at the 2021 NBA Finals.

The Warriors need to add an impact newcomer. Just bringing back Curry, Thompson, and Green will not be enough. Not in the Western Conference, and especially not in the Pacific. When the Warriors were at their peak, no one else in that division could touch them. Now, Los Angeles has possibly the NBA’s two best teams: the Lakers of LeBron James and Anthony Davis, and the Clippers of Kawhi Leonard and Paul George.

What should the Warriors do? Ownership and the front office likes to pride itself on being the smartest guys in the room. This decision will be a defining moment for general manager Bob Myers. He can’t afford to screw this up. Choose correctly, and the Warriors might have their Dynasty 2.0. Choose wrong, and the Warriors could find themselves stuck with aging players with high salaries and no shot at a championship.

There’s plenty of speculation that Golden State will shop the No. 2 pick. There’s no Zion Williamson or Ja Morant in this draft. No clear-cut, can’t-miss star ready to plug into the starting lineup. But it looks like a deep draft, so the selection has value.

There are a lot of rumors out there. Some more realistic than others. The idea that Golden State can find a way to acquire Giannis Antetokounmpo seems highly unlikely (True, the idea of the Warriors getting Kevin Durant also seemed crazy in 2016.) Antetokounmpo becomes a free agent next summer, and it seems inconceivable that Milwaukee would trade the game’s best player. Antetokounmpo seems happy in Milwaukee, but a lot can change between now and next summer, especially if the Bucks don’t reach the NBA Finals.

One name to watch could be Bradley Beal. The Washington Wizards guard is an electric scorer on a mediocre team. Could the Warriors offer an attractive enough package (Andrew Wiggins, the No. 2 pick, and a top-three protected first-round pick from Minnesota)? And are the Wizards motivated to deal their best player?

If Golden State could pull this off, the Warriors would add another shooter to their perimeter-based attack. Consider the following: Beal has shot 38 percent from three-point range for his career. Last season, he was second in the league in scoring (30.5 ppg). How lethal would he be paired alongside Curry and Thompson? The Warriors have already proven that can incorporate a high-scoring wing player into their offense (Durant).

There are other players who could be on the market. Philadelphia says that it wants to keep both Joel Embiid and Ben Simmons, but we don’t know how that will play out. Jrue Holiday was rumored to be on the trade market last winter.

While Golden State will certainly explore trading the No. 2 pick, the Warriors might elect to keep it in hopes of nabbing their franchise player of the future. It could be like the San Antonio Spurs transitioning from a Tim Duncan-led team to a Kawhi Leonard-led team.

The most interesting player in the draft is Memphis center James Wiseman, last year’s No. 1 incoming high school recruit. Since the Minnesota Timberwolves already have Karl-Anthony Towns, it would seem unlikely that they would take another young center with the No. 1 overall selection. Wiseman probably will be there at No. 2. He’s a bit of a mystery man because he only played three games at Memphis. He quit college after he was suspended by the NCAA for accepting impermissible benefits.

In three games, Wiseman was spectacular, averaging 19.7 points, 10.7 rebounds, and three blocked shots in only 23 minutes per game, while shooting 76.9 percent. What will he be in the NBA? On the high end, he has been compared to Anthony Davis and Chris Bosh. Wiseman could make an immediate impact as a high-energy finisher and rim-protector. But will his offensive game grow? Most of his field goals came close to the basket, and he had only one assist in 69 minutes of college ball.

If the Warriors believe that Wiseman is limited skill -wise, they probably will look at other options. LaMelo Ball is a spectacular passer, but he shot just 37 percent last year in the Australian National Basketball League. Plus, you would have to deal with his loudmouth father, LaVar Ball. Georgia’s Anthony Edwards might be the best pure athlete, but his game has holes. ESPN analyst Jay Bilas said; “Anthony Edwards is a freak athlete and a ridiculous scorer. He just doesn’t know how to play yet.” That’s not a ringing endorsement.

The NBA draft isn’t until Oct. 16. We probably won’t know Golden State’s plan until then. But when the regular season starts, all eyes will be on the Warriors, the league’s most intriguing team.