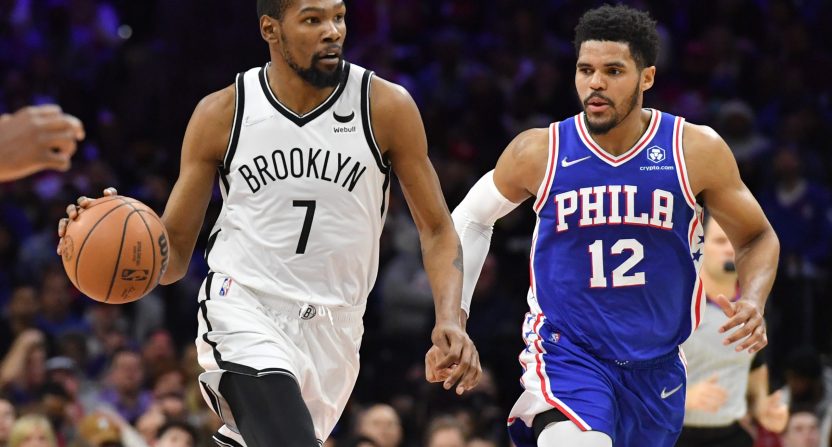 Going into Thursday night’s matchup between the Brooklyn Nets and Philadelphia 76ers, the Sixers looked like the championship favorites. They were incinerating everybody with the Joel Embiid–James Harden tandem. That quickly changed when a full-strength Brooklyn team destroyed them.

The Nets have not always inspired confidence this season, but they looked outstanding against Philly. Kevin Durant and Kyrie Irving performed at their usual levels, combining for 47 points and 12 assists, while the role players did everything they’re supposed to do. Seth Curry especially rained fire all game.

Most impressively, Brooklyn put together a concerted defensive effort. Joel Embiid bought a timeshare at the free throw line (he went 15-19 for the game), but he was just 5-17 from the field. James Harden played like it was a must-win playoff game, shooting 3-17 for 11 points. Harden and Embiid were both a minus-30.

It was an atrocious display from the Sixers, and an amazing one for the Nets in a fierce playoff atmosphere. Let’s run through some takeaways:

The number one thing that worked for the Nets on offense was setting screens for Durant. Usually, they put Embiid’s man into the action in order to drag Embiid out of the paint.

At the start of the game, the Sixers played their usual drop coverage, with Embiid dropping off to protect the rim. Durant immediately rendered that ineffective:

Embiid was too far away to contest the shot, and Durant’s defender, Tobias Harris, was caught up in the screen. That was a feast for Durant. (And for Curry, who also took advantage of the drop.)

The Sixers quickly adjusted to a more aggressive trapping scheme, in which Embiid met Durant at the point of attack. The goal was to prevent Durant from rising into jumpers. That didn’t work either, as Durant turned into a passer:

It is going to be crucial that the Sixers figure out how to play help defense. When Embiid isn’t there to protect the rim, the other three players need to rotate on time and in sync to stop the open guys. Brooklyn’s big men, Andre Drummond and Nicolas Claxton, took full advantage.

This was terrible help defense:

Georges Niang should commit to the driving James Johnson, leaving Shake Milton to defend the two guys on the perimeter. Instead, no one committed to anything and Johnson got a dunk. (Johnson had 16 points on 6-7 from the field.)

Curry is wide open. Niang lingers too long in the paint after Harden covers Claxton.

Embiid is considerably less effective as a defender when he is out of drop coverage. Durant is great at passing out of traps, taking Embiid out of the play completely. The Nets have so many shooters that any lapse in rotations will be punished.

I can think of two counters that the Sixers might consider: One, put Matisse Thybulle on Durant instead of Irving. Thybulle can handle Durant, and even if that means a lesser player is guarding Irving, it should result in more size in the paint (in the form of Harris) to back up Embiid if he is away from the rim. Plus, Thybulle can fight through screens, lessening the need for Embiid to venture all the way out.

Two, consider switching. It’s against the longtime ethos of the Embiid-era Sixers, but why not just ask Embiid to pick up Durant sometimes? Philly is already switching 1-4 with Harden around. Against a team like Brooklyn, it’s at least worth a shot.

Harden put together a disasterclass

Harden attempted 10 two-pointers and missed all 10 of them. The Sixers obviously are going to need him to play better. He looked a step slow all game. Watch him struggle to drive through Goran Dragic:

He had a lot of trouble getting to the rim. He played sloppily and never found the same pick-and-roll rhythm with Embiid that we’ve seen since the trade.

One of the biggest reasons was the Nets’ smart, aggressive help defense. Durant was a big factor with his defense off the ball:

Durant got his hand on the ball and induced a flailing attempt at drawing a foul. He was active all game in the lanes, often helping far off Thybulle, a non-threat from three.

The Nets were not hesitant to defend aggressively off of shooters. They doubled Embiid and crowded the lane for Harden. The help was on time and the rotations were in sync, an impressive display from a team that is not known for its defense. (Just wait until they add the best perimeter defender in the league to this lineup.)

Here’s Curry helping in the lane to prevent an easy Embiid jumper in the paint:

Notice how early Curry planted his feet in the lane, knowing what was coming and getting his hands in the right places. Part of the reason he is able to do this is the cramped spacing resulting from the presence of Thybulle. If Thybulle can hit some threes and make defenses guard him at some point, it would be massive for the Sixers.

Everything is going to be tough against this Brooklyn team. The Nets put a ton of shooting around an unstoppable duo, and they’re going to add a transition monster (and the best perimeter defender in the league) to this equation soon. The world deserves a Nets-Sixers playoff series.

(This post also appears on the free Substack newsletter Only Down One.)