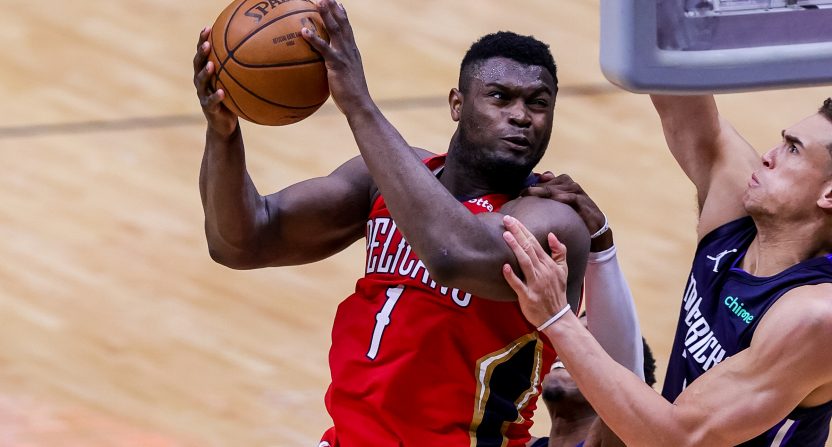 The New Orleans Pelicans have had an uneven season. Hampered by one of the league’s worst defenses, they’re on the outskirts of the Western Conference play-in race. They sit 11th in the league’s tougher conference, within reach of the 10th-place Golden State Warriors, but behind where they might hope to be with two All-Stars.

It’s early in the Pelicans’ timeline, though, and balancing the present and the past has been the core dilemma of their season. The most important part has been the leap that Zion Williamson has taken. He was great in his rookie season, but he’s been a borderline All-NBA talent in his second, discovering a new offensive dominance.

Zion has paired his off-the-charts athleticism with new dribble moves and offensive awareness. There was a reasonable worry during his rookie season that teams would learn to form the Giannis Wall and force Zion to pass, shoot a jumper, or finish through contact. Already, Zion is discovering solutions to that problem despite his continuing status as a non-shooter.

He has taken a bigger role in the Pelicans’ offense, with his usage rate rising to 30 percent in the 10 games he’s played since the All-Star break. His absurd efficiency numbers remain. Of NBA players who have a usage rate over 20 (and have played 25 games), Zion’s effective field goal percentage of 62.9 ranks third. He takes 73 percent of his shots at the rim and makes 70 percent of those, Shaq-like numbers.

This season, the percentage of his two-point field goals that are assisted has gone down to 58 percent, from 75 percent in his rookie year. That is emblematic of Zion’s overall offensive growth: like other modern superstars, he is initiating his own offense. Point Zion is a real thing.

Zion now runs pick-and-rolls as a ball-handler 2.7 times per game, and his efficiency on those plays is in the 90th percentile of all NBA ball-handlers (1.09 points per possession). Those possessions were non-existent last year. It must be a scary sight for NBA defenders to see Zion’s frame barreling toward them in the lane, particularly when they’re smaller guards who get caught up in a switch. It doesn’t matter whether you’re able to prevent Zion from dunking, either. His package of layup finishes is extensive.

His diversity of layups comes in handy when he’s the roll-man, too:

As he’s often had to do this season, Zion overcomes subpar spacing in the above clip. With Steven Adams in the game at center, the Bucks counter with both Brook Lopez and Bobby Portis, the two bigs who contest Zion when he gets the feed from Eric Bledsoe. None of those spacing issues end up mattering. Zion rises with both of them and simply stays in the air long enough to finish. His ability to maintain his touch while in midair like this is a big reason for his efficiency near the rim.

The verticality of Zion is a sight to behold. He has the build of a linebacker, but his dominance is aerial. When he posts up, it’s not necessarily to instigate a ground war with a weaker player; instead, it’s a vehicle for him to get to his launching points, where he’ll rise higher and use his power to shrug off contact.

Everyone knows he wants to spin from right to left and rise up to the rim. That move remains close to unstoppable. But the repertoire is growing. There are signs of increasing comfort and nuance with his off-hand, as Zach Lowe wrote last week. Zion has a good feel for the pick-and-roll reads that every perimeter star player needs to know. He can drive from any spot on the floor and find a way to levitate somewhere productive.

His straight-line speed has become evident as the Pelicans give him longer runways. When he plays as the nominal center, New Orleans can leverage the threat of a guard screening for him with four-out spacing.

Semi Ojeleye, a stout defender, was so preoccupied with preventing Kemba Walker from having to switch onto Zion that he got caught leaning to Zion’s weaker right hand. Lonzo Ball’s screen hadn’t even been set by the time Zion was using it to rampage to the hoop. These kinds of quick decisions can really hurt defenses.

The passing is a legitimate strength. He isn’t yet a high-volume facilitator — Ball (who is, somehow quietly, playing very well) and Brandon Ingram do more of that — but he makes quality, on-time passes out of his drives on a consistent basis. Here, he spins to his left on the baseline and finds Ingram open in the corner rather than forcing a contested layup:

The at times chaotic nature of Zion’s attacks on the rim could make it hard for him to settle down and pick out passes, but he has been a solid passer from the beginning and has only improved.

His growth as a ball-handler fits neatly alongside his utility as an off-ball wrecker. He’s one of the league’s best cutters (3.4 per game, third-highest in the NBA, and a ridiculous 1.47 points-per-possession), and he remains a big offensive rebound threat.

The Pelicans have to figure out how to put the best pieces around their two stars, Zion and Ingram. Ball — who’s a restricted free agent this summer — is a great fit, but the Pelicans were reportedly shopping him extensively at the trade deadline. As necessary as Steven Adams is to the Pelicans’ defense, the best version of a Zion team would probably have a stretch five (Zion’s subpar defense has to improve for him to be able to function at the five more often). It will be important to watch the progression of their young players the rest of this season: the rookie Kira Lewis Jr., the crafty young guard Nickeil Alexander-Walker, and the explosive, defense-averse center Jaxson Hayes.

Ingram’s progression as a passer and defender is crucial as well. He’s a plus defender, but he has the physical tools to take on the alpha wings of the Western Conference. And with no one else on the Pelicans capable of that task, he has to get to the point where he can do it on a consistent basis.

There might be hand-wringing in the future about the fit of Zion and Ingram together. Despite the Pelicans’ place in the standings, there’s no reason to think they can’t work very well together. After all, the Pels’ starting lineup this season is the second-most used five-man group in the league, and it has a plus-3.2 net rating. As a team, their offense ranks third in the league since February 1.

At the center of it is the trampoline wrecking ball of Zion Williamson, who’s adding more every game and polishing the rough edges. There’s no doubt that he’s lived up to the hype. The Pelicans have their franchise star.