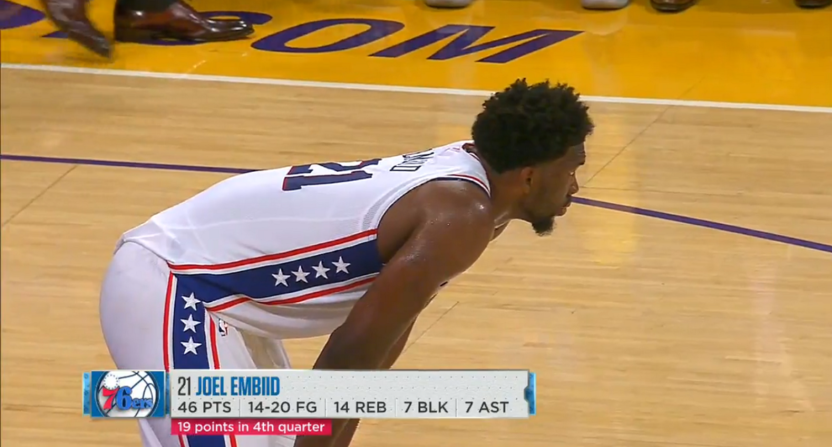 After sitting out all of the 2015 season, Joel Embiid was only able to play in 31 games last year. In those games, though, he averaged 20 points and 8 rebounds per contest, promising numbers for one of Philadelphia’s centerpiece players.

Heading into this season, Embiid was expected to take another step forward, alongside the anticipated growth of the Sixers as a team, having moved from the “collect draft assets” stage of a rebuild to the “develop collected assets into winning team” stage, heralded by the additions of players like J.J. Redick to fill in the gaps among young studs like Embiid and Ben Simmons.

While the season hasn’t been perfect, with things like their most recent #1 overall pick completely ruining his own shooting stroke while apparently hiding an injury of some kind to his shoulder, Embiid has demonstrated exactly why he’s been worth the wait, averaging 20 and 10 through 11 games. And in a nationally televised game in Los Angeles last night, he put on an even more impressive show.

Embiid finished the night with 46 points, 15 rebounds, 7 assists, and 7 blocks. It was an astounding display of offensive efficiency and overall ability. Embiid was 14-20 from the floor, hitting 2-3 from beyond the arc, with a stroke that makes you think he could probably approach or even crack the 40% barrier if he wanted to.

But he does so much damage in the post, or even off the dribble against overmatched opposing bigs, that it doesn’t make much sense for him to linger outside. Embiid also went 16-19 from the foul line, meaning there’s no real way to defend him. Here’s a 7-footer rolling off a screen, catching a pass, and throwing a Eurostep down on the way to a lay-in:

If you put a bigger body on him, as the Lakers tried to do at times with Brook Lopez, and Embiid can put it on the floor and get to the rim or the foul line. Throw a quicker, smaller big like Julius Randle at him, and Embiid will take him to school down low, as he did here:

Here’s another angle, and what’s notable isn’t just the fundamentals on display; after all, any 6’4″ old man at the local rec center probably has something similar in the repertoire. It’s the ferocity and quickness with which he deploys them.

Embiid is to a traditional big man what LeBron and Kevin Durant are to traditional wing players; bigger, stronger, faster, and smoother. Watching him play, it remains remarkable that he only picked up the game eight years ago. You can clearly discern the Hakeem influences, too, and not just when he breaks out the Dream Shake.

Look at this play. It’s a setup you’ll see a dozen times or more in every NBA game. Post player catches it a few steps off the block, then turns and faces up. Normally that’s a sign that a few ball fakes are coming en route to either a lofted midrange jumper or a pivot back to a post position. Embiid has another idea:

Look at how fast he rips it through. He blows by Julius Randle with nothing more than a first step, getting baseline and beating the help defender to the rim with ease. It’s honestly not fair.

Here’s the sequence directly following the earlier Embiid and-1, featuring essentially the utopian version of what these Sixers can be:

First of all, 7 blocks! Embiid is a fairly legitimate rim protector already, and though he did have 4 fouls in 34 minutes, he still demonstrates the kind of innate defensive ability that again belies how late he started playing basketball.

After the block, Simmons brings it up the court, and they post Embiid immediately, because they’re not stupid. Just about the only thing the Lakers could do was try to double him, as they did here, except  that leaves you with shooters like Redick and Robert Covington to worry about, along with the slashing threat of Simmons.

It’s the latter option who ends up with it here, after some nifty ball movement and off-ball work gets Simmons a favorable post matchup on the opposite block, which leads to Simmons taking his man off the dribble, elevating in the lane, and seemingly dropping the ball into the hoop from eight feet away.

Simmons ended up one board shy of a triple-double, finishing with 18 points, 10 assists, and 9 rebounds. He’s really, really good, and should probably be the favorite for rookie of the year at this point. (Speaking of, Lonzo Ball sat the entire fourth quarter of a close game, rendered unplayable by virtue of a broke jumper that left him with just 2 points. It’s a real shame.)

The Sixers certainly have a long way to go in terms of playing together and developing their younger stars, but Embiid becoming a top-10 player in the NBA in the very near future is one way to cut the head of the line. That stat line is hard to fake, and the skills match up. He’s amazing, and incredibly fun to watch.

Oh, and he also roasted Lonzo and LaVar Ball on Instagram, too, continuing his streak of doing just that:

WHAT A NIGHT #TheProcess pic.twitter.com/92q82Zzvzb

On Instagram, Embiid changed his location to get a shot in at LaVar Ball, too:

He softened the Lonzo-centric aspect of that post, or at least tried to:

I like Lonzo’s game… no shots towards him #TrustIt