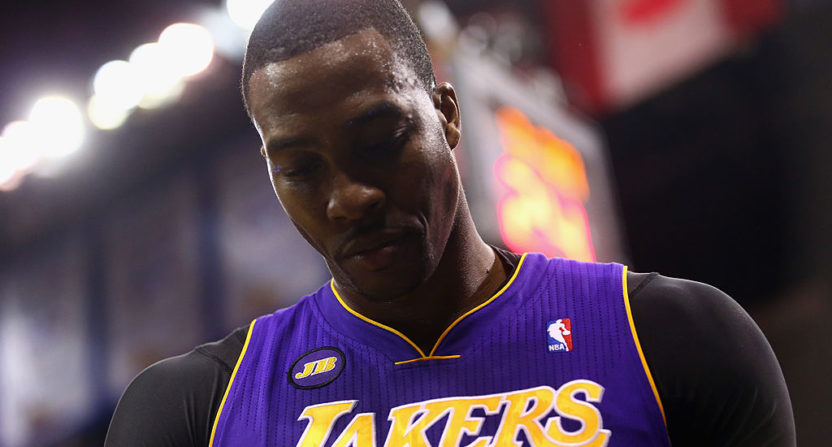 Lakers legend Kareem Abdul-Jabbar was a six-time NBA MVP, so he seems like a good person for any post player to learn from. But as he tells it, Hawks center Dwight Howard wasn’t interested in learning from him when Howard played for the Lakers during the 2012-13 season.

Jabbar has been doing several interviews to promote his new book Coach Wooden and Me: Our 50-Year Friendship On and Off the Court. In an interview with Lakers Nation published Thursday, he ripped into Dwight Howard and former Lakers center Andrew Bynum for their poor work ethic during their time in Los Angeles:

“Well, Dwight Howard didn’t want to do any work,” Kareem told Lakers Nation. “Andrew Bynum did not want to do a lot of work, but Andrew was kind of getting the hang of it. I don’t think Andrew was that interested in playing basketball.

Jabbar went on to explain how Bynum simply wasn’t fond of the game nor did he want and to become a dominant player. As for Dwight, it seemed to be a lost cause from the beginning.

“I don’t think he liked the game,” Jabbar said of Bynum. “He didn’t want to master the game.”

“Dwight Howard, I’m not going to say anything about him because I really don’t understand what his thing was.”

Howard already responded on Instagram, commenting on a post by blog author Ryan Ward that included Jabbar’s quotes. Howard said the Lakers told him not to work out with Jabbar:

“Dude, don’t lie to these people about me not wanting to work with him. Before you make a story, get all your facts straight before lying to people. Why wouldn’t I wanna work with dude. He’s one of the best all time. Dude know the truth. The team didn’t even want him in the practice facility.”

After Ward reiterated the quotes were Jabbar’s and not his, Howard responded again:

“I know it’s his words. But you could have checked both sources before reporting it. I understand your [sic] doing your job. Dude don’t have to lie tho. As soon as I was traded to Lakers [the] first person I sat with was dude. Wanting to work out. Go look back at my post. I posted a pic with him and myself at a hotel. But if a team says stay away I did what [I] was asked.”

Ward also commented in the post that he asked to interview Howard for his side of the story, but Howard did not respond.

Even if Howard is telling the truth, that does not necessarily mean Jabbar is wrong about Howard’s work ethic. Many people questioned how much Howard cared about succeeding when he was a Laker, and at other points in his career. At the same time, Howard was coming off a major back surgery when he was in Los Angeles. So the issue is not exactly black and white.

This tweet from when Howard joined the Lakers in 2012 certainly suggests he respected Jabbar.

Me and @kaj33 together. For many years to come. pic.twitter.com/YR9ACNdH

During his one season in Los Angeles, Howard averaged 17.1 points, 12.4 rebounds and 2.4 blocks as the Lakers went 45-37 with a team that also featured Kobe Bryant and Steve Nash. After sneaking into the playoffs, they were promptly swept by the Spurs. Howard then signed with the Rockets, turning down a $118 million offer that would have kept him in L.A.

Bynum was a different story as a Lakers lottery pick straight out of high school in 2015 who spent seven injury-riddled seasons with the franchise, averaging 18.7 points and 11.8 rebounds at his peak before getting traded to the 76ers in the deal that brought Howard from Orlando to Los Angeles.

Even though Bynum is out of the NBA while Howard still averaged a double-double for the Hawks this season, it sounds like Jabbar would have been happy with that trade never going through.