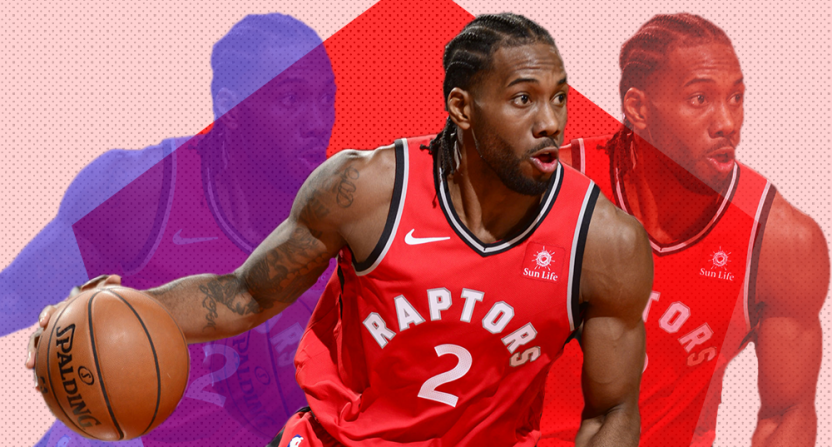 In the summer of 2018, the Toronto Raptors stunned the basketball world by dealing fiercely loyal homegrown All-Star Demar DeRozan to the San Antonio Spurs in exchange for the disgruntled, but extremely talented Kawhi Leonard. The move was one of the biggest star-for-star trades in modern NBA history, and represented a huge, franchise-changing risk for the Raptors.

Acquiring Leonard was a move obviously made with the playoffs in mind for Toronto. DeRozan consistently led great regular-season teams to disappointing playoff exits; the Raptors failed to make it past the Conference Semifinals for three straight seasons, each time in heartbreaking fashion. Meanwhile, Leonard’s postseason resume included a championship and NBA Finals MVP in 2014. It was a gamble to bring Leonard — a free agent who was (and still is) unlikely to stay in Toronto past this season — into the fold. But, the trade was exactly the fix the broken team needed.

Kawhi Leonard: "There’s 82 games and for me these are just practices and playoffs is when it’s time to lace them up.​"

Leonard has been exceptional when it matters for the Raptors. He’s not just making the plays DeRozan couldn’t; he’s playing at a historical level that will be remembered as one of the greatest individual playoffs performances in NBA history.

In 2018-19, Leonard has been the best player in the NBA in the playoffs. In nine games, he’s averaging a ridiculous 32.3 points, 7.7 rebounds, and 3.4 assists, while shooting 50 percent on threes and 58 percent from the floor. Leonard is also the best one-on-one defender in the NBA and impacts the game just as much on the defensive side as he does on offense. Leonard’s unique mix of talent has added an element to the Raptors they have never had: a star who can win and dominate on both sides of the court.

During Toronto’s 101-96 victory in Game 4 against the Philadelphia 76ers, Leonard practically singlehandedly propelled the Raptors to victory. He scored 39 points on just 20 shots and hit five of seven three-pointers, including this ridiculous fadeaway with a minute to go to put the game on ice:

Against the 76ers, Leonard is averaging 38 points while shooting 62 percent of the field. Those numbers are just as eye-popping as they are incredible. While Leonard just misses averaging 40 points per game mark, his field goal percentage against the 76ers would be better than any of the five players who accomplished that feat in a single series – including Michael Jordan. With his impressive Game 4 performance, Leonard is among elite company, becoming the fifth person in NBA history to record 150 points, 30 rebounds, and 15 assists through four playoff games. Look at the Hall of Fame names he’s keeping up with:

With another monster game vs the 76ers, Kawhi Leonard becomes the 5th player in NBA history to record 150 points, 30 rebounds and 15 assists through the first four games of a playoff series.

The four others to do so are all Hall of Famers (h/t @EliasSports) pic.twitter.com/1ocvZhR5sl

Leonard has elevated his game to a new peak. He’s averaging more than double of the 17.8 points per game he averaged in 2014 when he was named Finals MVP, and is shooting a better percentage on nearly twice as many shots per game. His career-best 26.6 points per game that he posted in the regular season has been dwarfed by his playoff performance. Leonard’s efficiency puts him at a top-tier level among recent and all-time playoff performers. Leonard deserves the Jordan comparisons. Even in just nine games.

Leonard has carried a largely sluggish and underperforming Raptors team into a 2-2 series tie with little in the way of help. As Marc Gasol, Kyle Lowry, and Danny Green have provided inconsistent performances, Leonard (and to a lesser extend Pascal Siakam) have kept Toronto’s playoff hopes alive. Leonard has made a very good team a great team, and one that should be believed in.

Toronto’s wait and see approach to getting Leonard ready for the playoffs has paid off better than anyone could’ve expected. The Raptors and Leonard faced some criticism for choosing to tactically rest him during the regular season. Acquiring a top-five player in the league and having him sit more than 20 games couldn’t have been an easy decision. However, it was the best move for Leonard, who missed nearly all of 2017-18 with a mysterious quad injury. Toronto had a rested, fully-charged superstar ready to prove doubters wrong. So far, there’s no question he’s done that and more.

Leonard is contributing at an absurdly productive pace, and has given fans in Toronto a reason to not feel like the annual postseason letdown is coming. The Raptors have home-court advantage in a tied series with their best player playing at their highest level. Thanks to Leonard, the Raptors should finally have some confidence that an NBA Finals bid is truly possible. He’s literally done everything he can to make Toronto the contenders they hoped to be when pulling off the deal to acquire him. Even if he leaves at the conclusion of the playoffs, Leonard has made a serious impact in Toronto with his outstanding play.