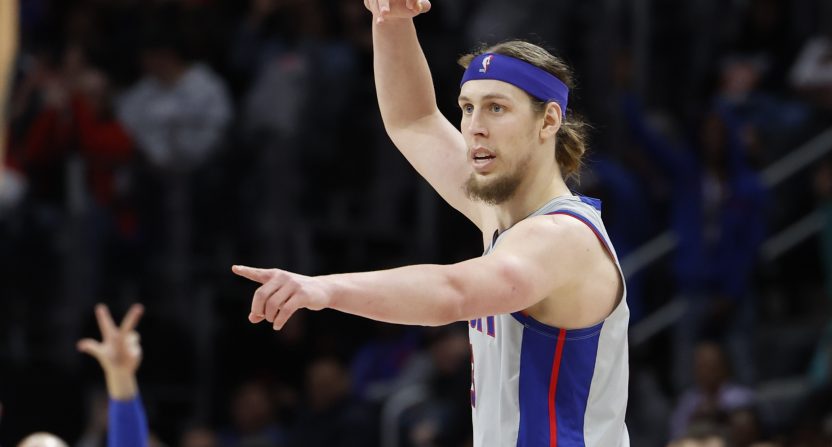 Detriot Piston’s big man Kelly Olynyk had his wedding over the weekend with his longtime partner Jackie McNulty tied the knot in Santa Ynez, California this past Saturday, and the NBA veteran made headlines for all the right reasons.

At the party, Olynyk and McNulty—both alums of Gonzaga—spared no expense, treating guests to food trucks, a scavenger hunt, sushi flown in from Olynyk’s favorite restaurant in Boston (where he played for the Celtics from 2013-17), mini-basketball, a “shot clock” for chugging drinks and even table games including craps and poker.

It was a fun wedding, and Olynyk dressed for the occasion. Instead of rocking a nice pair of dress shoes, Olynyk opted for a pair of retro Jordans and a snap back – all while donning a classic black and white tuxedo.

Kelly Olynyk really wore a snapback to his wedding 😂

For those who are outraged and confused by Olynyk breaking tradition, this is actually the newlywed’s third part following an intimate ceremony reserved for immediate family members in Idaho and a Vegas wedding officiated by an Elvis impersonator.

After tying the knot after five years of dating, the Olynyk’s are setting off to Europe for their honeymoon, traveling to Mykonos, Tuscany and the Amalfi Coast, according to Anna Lazarus Caplan of People Magazine.

Selected 13th overall by the Celtics in 2013, the 31-year-old Canadian has productive role player in the NBA, averaging 10.1 points on 47.6-percent shooting (36.5 percent from downtown) in 168 starts for Boston, Miami, Houston and Detroit.

Not to mention also made a fortune ($72.54 million in career earnings), allowing him the financial freedom to plan not one but THREE separate weddings and a lavish, Mediterranean vacation to boot.