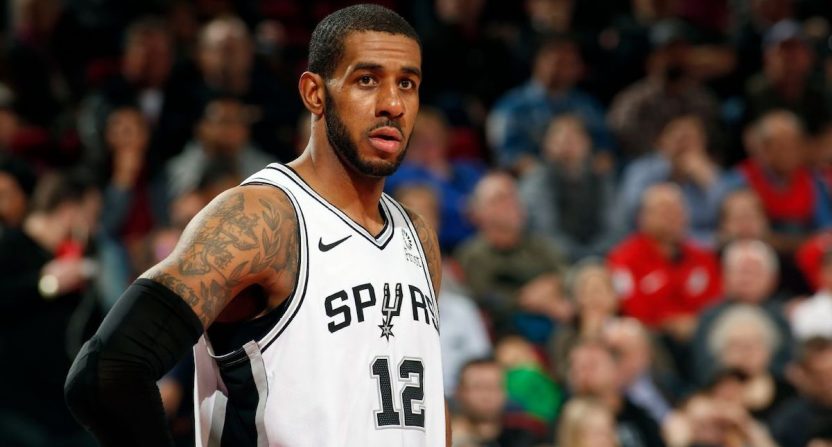 In a surprising development, LaMarcus Aldridge is retiring from the NBA after 15 seasons due to an irregular heartbeat.

The veteran announced the news himself on Twitter Thursday morning, explaining that he felt the irregular heartbeat following Saturday’s game between the Brooklyn Nets and Los Angeles Lakers.

“For 15 years I’ve put basketball first,” Aldridge said. “And now, it is time to put my health and family first.”

Aldridge, 35, called the incident “one of the scariest things I’ve experienced,” but says he’s recovered. He recently signed with the Nets after agreeing to a buyout from the San Antonio Spurs, with whom he played the past six seasons.

Aldridge actually had a history of heart concerns throughout his career. In 2017, he was sidelined with a minor heart arrhythmia. During his rookie season, Aldridge was diagnosed with Wolff-Parkinson-White Syndrome, a condition that causes a rapid heartbeat. At his age, he and his family clearly didn’t want to take any more risks.

For his career, Aldridge averaged 19.4 points, 8.2 rebounds, and 1.1 blocks per game. He was named to seven All-Star teams and earned All-NBA honors six times.

The 6-foot-11 center was the No. 2 overall pick in the 2006 NBA Draft out of Texas, where he played two seasons. Selected by the Chicago Bulls, Aldridge was traded on draft night to the Portland Trail Blazers for Tyrus Thomas (the No. 4 pick that year) and Viktor Khryapa.

Aldridge played nine seasons in Portland, finishing his Trail Blazers career as the second-leading scorer in team history behind Clyde Drexler with 12,562 points. (Damian Lillard has since passed him.) He’s still the franchise’s leader in defensive rebounds (3,698) and total rebounds (5,434), marks he’ll likely hold for many years to come.

Signing with the Spurs as a free agent in 2015 was an impactful move in the NBA. Aldridge appeared to be a foundational player for the Trail Blazers, but going to San Antonio strengthened one of the league’s best teams. The Spurs were one season removed from winning an NBA championship with Kawhi Leonard approaching his prime and Tim Duncan nearing the end of his career.

San Antonio only made it to one Western Conference final with Aldridge, however. And the decline of the team coincided with Aldridge’s body breaking down and his skills diminishing. In March, the rebuilding Spurs decided to sit Aldridge out until a trade partner could be found. With no deal to be made, the two sides agreed on a buyout.

Statement from our GM Sean Marks on the retirement of LaMarcus Aldridge: pic.twitter.com/3WKRJgAmpn

Landing with the Nets for a starting role on a super-team looked like a potentially excellent end for Aldridge’s career. Maybe he’d finish out with the NBA championship that eluded him for the previous 14 seasons. Unfortunately, that won’t be the case. Aldridge’s stint in Brooklyn lasted five games, with an average of 12.4 points, 4.8 rebounds, and 2.2 blocks.

“We know this was not an easy decision for him,” said Nets general manager Sean Marks in a statement from the team. “But after careful consideration and consultation with numerous medical experts, he made the best decision for him, his family, and for his life after basketball.”