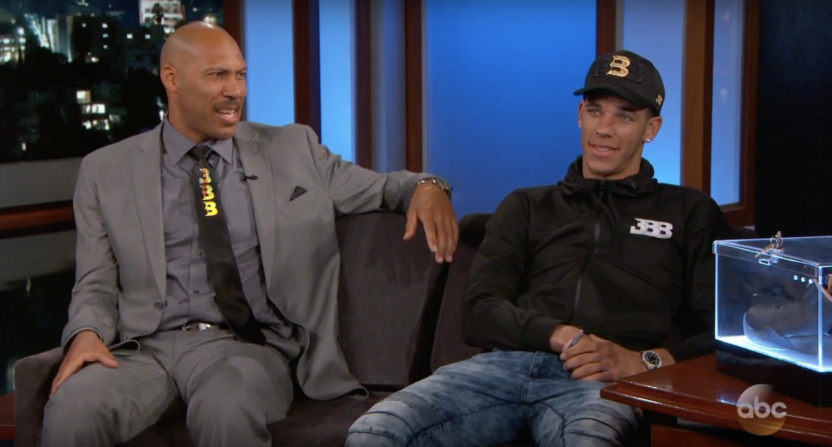 Basketball’s most polarizing father-son duo of LaVar and Lonzo Ball appeared on Jimmy Kimmel Live last night. And while Lonzo stayed pretty chilled out as usual, everything LaVar said was as ridiculous as his reflective Big Baller Brand tie. Not that that’s a surprise.

Let’s start with the most relevant segment from Monday night’s appearance — Lonzo talking about becoming a Laker. Kimmel, a big-time Lakers fan, asked Ball if he’d prefer being the No. 2 pick to the Lakers instead of the No. 1 pick to the Celtics, and Ball responded:

“That’s kinda where we’re trying to head to. … The main thing is just being home. I love being home, hometown kid. They’re right here in L.A. where I’m from.”

And yes, that’s LaVar Ball getting cut off at the end of the clip in a moment of pure beauty. The Lonzo to the Lakers talk has been big for months — ever since LaVar said his son wouldn’t play for any other franchise. While most draft analysts still consider Lonzo the favorite for the No. 2 pick, it’s not as clear-cut as we once thought.

The Lakers reportedly aren’t totally sold on Lonzo as a true NBA star, and they’ve been working out some of the other top point guards in the draft class this week to keep their options open. Some of the worries are about basketball, some may be about his dad.

But if the Lakers were watching to see how Lonzo handles himself in a big public setting, I imagine this TV appearance would only help. Lonzo stayed Lonzo, giving pretty short, straight answers and generally handling Kimmel’s banter well.

Aside from the Lakers talk, most of everything else centered around LaVar and the Big Baller Brand. They talked more about if LaVar could beat Michael Jordan in his prime in one-on-one. Not only did LaVar claim (once again) that he’d kick Jordan’s ass until “His Airness cried,” but he added that he’s never lost a game of one-on-one. Ever.

(This is a dude who averaged 2.2 points per game in college.)

Kimmel tried to bait Lonzo a few times, but he didn’t take it — as usual. Whatever you think about LaVar Ball, it’s pretty admirable how Lonzo accepts all his bullshit and sticks by his side. After all, LaVar pretty much dedicated his life as a parent to making Lonzo, and his two younger brothers LiAngelo and LaMelo, into basketball stars.

When Kimmel asked Lonzo what his father’s deal is, Lonzo gave a typical Lonzo response:

“He just wants the best for his kids.”

I hope for Lonzo’s sake the Lakers take him next week. Otherwise we’ll be dealing with a million “LaVar ruined Lonzo’s life” hot takes.