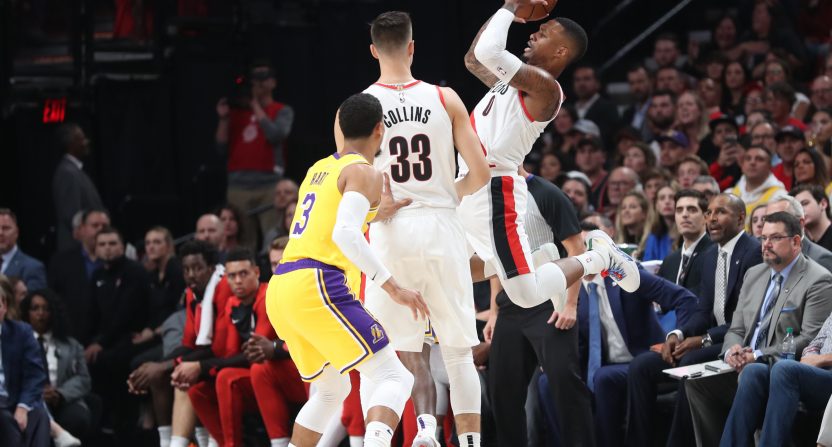 It’s a new era as LeBron James made his regular season LA Lakers debut Thursday night. LeBron’s debut was certainly an entertaining one as the Lakers took on the Portland Trail Blazers and the two teams exhibited a high-powered, high-energy game that rewarded offense. In the end, the Blazers took advantage of superior three point and free throw shooting to defeat the Lakers 128-119.

LeBron’s impact in this game began rather quickly. His first points as a Laker consisted of two thunderous dunks a little over two minutes into the game.

You would think that this would be the start of a Lakers rout thanks to LeBron but the Blazers held strong and eventually overpowered the Lakers. Despite the high scoring offense, the Blazers were able to stay ahead of the Lakers because the Lakers were pretty terrible from three most of the night. The Lakers missed their first 16 shots from three and didn’t hit one until 2:20 left in the third quarter. So while the Lakers were able to have a respectable field goal percentage of 48.4 percent, the Blazers ended with a 93.1 free throw percentage and shot 35.1 percent from three, which was their key to victory.

LeBron ended up with 26 points, going 9-16 from the field and 8-9 on the line. As was the case with the entire team, LeBron struggled from three, going 0-4. Josh Hart had a good night off the bench, scoring 20 but it just wasn’t enough.

In terms of the Blazers, Damian Lillard led the team with 28 points and C.J. McCollum had 21 but it was Nik Stauskas who really stepped up. Stauskas scored 24 points off the bench including going 7-11 from the field and 5-8 from three. Stauskas had only averaged 4.4 points per game last season and had 24 tonight. That had to have been a welcome sign for the Blazers, who probably weren’t expecting that.

Portland’s season opener was also a time to reflect. They played with heavy hearts as they honored owner Paul Allen, who died this past Monday at the age of 65 due to non-Hodgkin Lymphoma. The Blazers paid tribute by having a moment of silence and leaving a rose and hat in his seat.

The @trailblazers recognize Paul Allen with a moment of silence pregame in Portland. pic.twitter.com/PTRxZ4mrfj

Even though the Lakers lost, it’s nowhere near time to panic. For one, Portland is a great team and would be tough to beat regardless. Plus, LeBron is 0-4 in team debuts so it’s not like it’s the end of the world. Having said that, the Lakers do have areas to improve. They need to work on three point shooting, they need to rebound better and they need to be more physical, especially among the bench players. The Lakers can score plenty of points in the paint but that alone isn’t going make them a top team in the competitive West. So while there’s some work that needs to be done, the Lakers should eventually be alright.