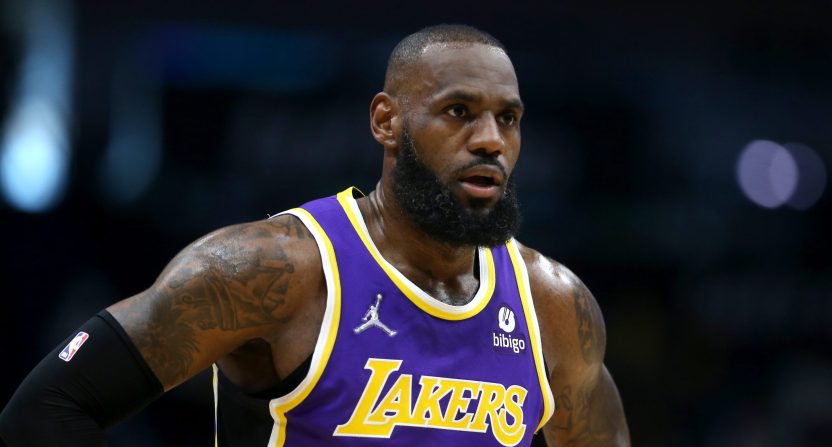 It’s safe to say that despite heading into his 20th NBA season, LeBron James is still looking like LeBron James.

During a Drew League game held in Los Angeles this past Saturday, James made a surprise appearance at the vaunted pro-am event — his first appearance since 2011.

The King dropped 42 points and single-handedly led his team, the Cheaters to a late game comeback after trailing late in the third quarter, ultimately winning the game 104-102 and leaving a lot of memorable highlights in the process.

At one point James got into it with the refs after missing a free throw and made sure to keep his brand loyalty with Nike by covering on the Adidas logo on his jersey — the league’s official sponsor.

The defender might want to keep this poster 😅👑pic.twitter.com/OWrhTAkw5V

LeBron Misses free throw then gets into argument with Drew League refs pic.twitter.com/GF6WNcpy0X

.@KingJames taped over the Adidas logo on his Drew League jersey 👀 pic.twitter.com/n1n26gi79R

As with anything LeBron does, many across Twitter had many funny and interesting reactions to the Lakers superstars’ performance.

"So we played LeBron James and DeMar Derozan, and we only lost by two with a chance to win at the buzzer"

"Sure grandpa, let's get you to bed" pic.twitter.com/VKXKDsrESp

#21 in the car after defending LeBron James in Drew League pic.twitter.com/GncWGXle2j

Love it that LeBron played in the Drew League today. But: he shot only 2-13 from three??? He missed the late free throw that would've at least clinched overtime? Some things never change.

When your squad dominating at Drew League and LeBron walk in pic.twitter.com/i6WFt2KtQ4

LeBron after his team barely won at the Drew League pic.twitter.com/tb9eM32mDg

James was also supposed to be joined by former teammate Kyrie Irving but he ended up not showing up. The reason remains unapparent. As for their opponents, “Black Pearl Elite,” they featured no NBA players but still kept the game competitive.

I’m sure those average joes will tell the story of playing LeBron James and pass it down to relatives and friends for as long as they are alive.