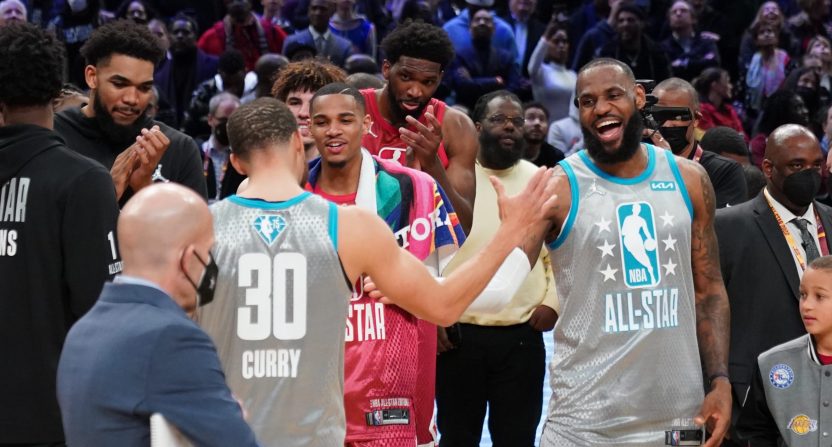 Los Angeles Lakers star LeBron James was recently asked which players he would want as a teammate on his YouTube talk show The Shop. He initially said his son, Bronny James, was his first choice. This comes as no surprise, as James has already said that wherever his son is eventually drafted, he’d like to play alongside him.

James also mentioned that, of active NBA players, he would most want to play with Golden State Warriors star guard Steph Curry. Curry became aware of his comments on Thursday during an interview with 95.7 The Game. Steph responded, saying that while he was flattered, he’s “good right now.”

“He got his wish, he was the captain and picked me in the last two All-Star games,” said Curry. “I don’t know if that suffices, but I’m good right now.

“Whenever you get the interest or curiosity of what it would be like to play with an MVP caliber dude like he is, cool that’s amazing. We all can live in that fantasy world though.”

Steph Curry’s reaction to hearing LeBron James comments about wanting to play with him 🔥 pic.twitter.com/frblnCNQGK

It certainly feels like Curry isn’t all that interested in teaming up with LeBron anytime soon, and the NBA world seems to realize that.

At this rate, Bronny might be the only person who wants to play with LeBron https://t.co/zQmHsGTWEB

It’s hard to listen to Curry’s response and not get the sense he’s rejecting LeBron in the nicest way possible.

LeBron’s future seems to be very much up in the air considering the chemistry issues that the Lakers have had this season. He has one year left on his contract, and the Lakers will likely need to show some big improvements if they want to keep the 18-time All-Star in 2023.