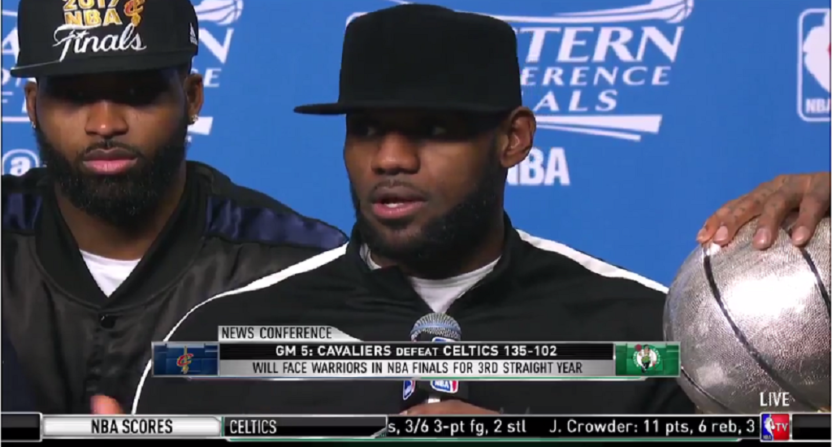 Thursday night was a special one for LeBron James.

The Cavs annihilated the Celtics 135-102 in Boston to reach their third consecutive NBA Finals, and LeBron became the NBA’s all-time leader in postseason points scored. LeBron needed 28 points to top Michael Jordan’s mark of 5,987 playoff points scored, and dropped 35 (13-of-18 from the field) on Boston.

LeBron met with the media after the game, and had some pretty genuine, awesome things to say about what Jordan meant to him growing up:

“I wear the number because of Mike. I think I fell in love with the game because of Mike. Just seeing what he was able to accomplish. But I feel like Mike was so… you know when you’re growing and you’re seeing Michael Jordan, it’s almost like a god.”

But LeBron also made it clear that he didn’t try to become the next Michael Jordan, because he “never thought [he] could get to a point where Mike was.”

“So I didn’t ever believe I could be Mike. I started to focus on myself on other players and other people around my neighborhood because I never thought that you could get to a point where Mike was. So I think that helped shape my game. I think the biggest thing for me sitting here today after breaking the all-time scoring record in playoff history is that I did it just being me. I don’t have to score the ball to make an impact in the basketball game. That was my mindset when I started playing the game. I was like, if I’m not scoring the ball, how can I still make an impact on the game? It’s carried me all the way to this point now, and it’s going to carry me for the rest of my career because scoring is not No. 1 on my agenda.”

LeBron talked more about Jordan’s influence on him, and cracked that he hasn’t gone bald yet like MJ, but he’s getting there (and pay attention to Tristan Thompson’s face here):

LeBron: "I didn't go bald like Mike, but I'm gettin' there."

I did pretty much everything that MJ did when I was a kid. I shot fadeaways before I should have. I wore a leg sleeve on my leg and folded it down so you saw the red part. I wore black and red shoes with white socks. I wore short shorts so you could see my undershorts underneath. I didn’t go bald like Mike, but I’m getting there. But I’m getting there. But it’ll be post-career. That’s the only thing I didn’t do.

Oh, and Kevin Love took a selfie during all of this:

Postgame podium has been incredible all postseason. pic.twitter.com/tzR4ELzLry