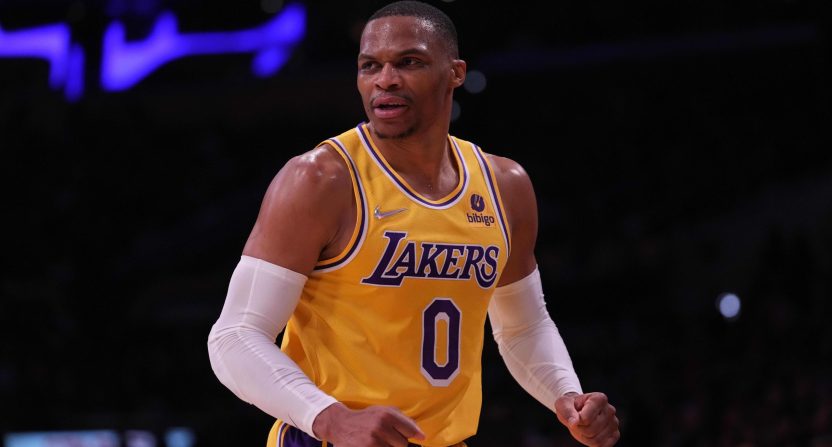 It is no secret that neither the Los Angeles Lakers nor star point guard Russell Westbrook has not lived up to expectations this season.

The team is currently struggling to hold on to a play-in opportunity in the Western Conference as the 9th seed. Meanwhile, Westbrook has had the worst statistical season since his second year in the league, averaging 18.1 points per game.

This has led to critics jumping at the opportunity to bash Westbrook at every turn, calling him nicknames like “Westbrick,” which have clearly taken a toll on the former MVP and his family.

Nina Westbrook, the wife of the nine-time All-Star point guard, took to social media to blast Fox Sports personality Skip Bayless, who has been notoriously hard on the Lakers point guard this season in his obvious narrative against the Lakers and LeBron James.

I’m tired you you @RealSkipBayless calling my husband out of his name. It is extremely childish. That is my name as well, and many other peoples name. You’re disrespectful, and I’m extremely offended by your behavior. You should apologize.

She added another tweet on Monday, along with a whole bunch of others, seemingly about Bayless and the general criticism their family has received.

If you are a public figure, you have to be responsible for the type of example you set. Unfortunately, you must keep in mind the consequences of your behavior.

It is reportedly far more serious than just some criticism, as she also said that her family has even received death threats due to Lakers games and Westbrook’s performance.

When I’m being harassed on a daily basis over basketball games, and I’m having obscenity’s and death wishes for me and my family sent my way because you’re expressing your “truth”, it’s hard for me to get on board with that.

Following the Lakers’ loss on Monday night against the San Antonio Spurs, Westbrook was asked by the media about his wife’s comments and all the criticism that he has received this season.

“I one hundred percent stand behind my wife and how she is feeling,” said Westbrook. “My family has reached a point where it is really weighing on them. This is just a game and it isn’t the end all be all. When it comes to basketball, I don’t mind the criticism of missing or making shots. When my name is getting shamed is where it becomes an issue.

“I can no longer allow people to shame my name. It is my legacy for my kids. A lot of times I let it slide, but it’s now time to put a stop to it and put it on notice. I don’t even want to bring my kids to the game because I don’t want them to hear people calling their dad nicknames.”

These comments from the star point guard had many people talking on social media, with many coming to the defense of Westbrook.

I’ll still fist fight for this man. Don’t get it twisted. #DontHateOnTheBrodie https://t.co/eLYxw1v25R

Not the biggest Russell Westbrook fan but he is 100% correct.

People need to chill out. https://t.co/7EyGWbvvvt

Good for Russ. The disrespect shown towards this man is shameful. https://t.co/a0UuFvVFqJ

The problem is way too many people get to say completely heinous and terrible things without consequence. People typing death threats and going after a guy like Westbrook personally, attacking his family; should feel the repercussions. But social media platforms leave that all up

Obviously some criticism for athletes is fair, but there is no scenario where death threats are justified. If the families of players don’t feel comfortable at their games, something just isn’t right about that.