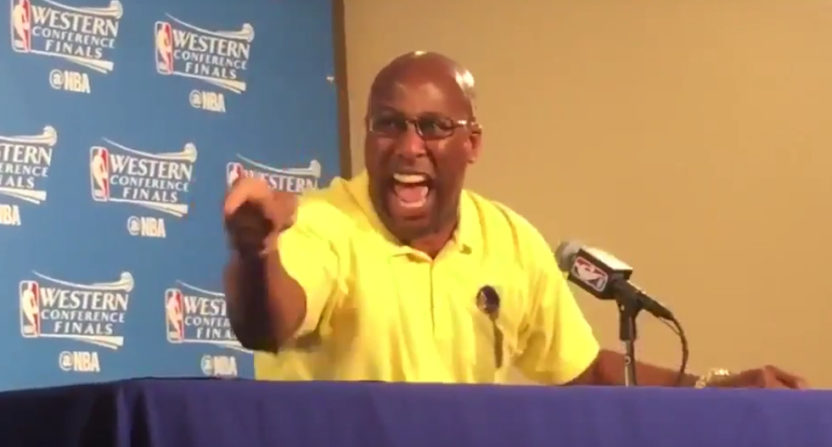 The Golden State Warriors’ acting head coach almost got arrested on his way to Oakland’s Oracle Arena ahead of Tuesday’s Game Two. That would be Mike Brown, who told the story of what happened at his pre-game press conference. Brown explained that he was late for the press conference because his Range Rover was followed by the San Antonio Spurs’ bus. He then stayed ahead of the bus and its police escort, and then got pulled over by the police when entering the Oracle parking lot.

Mike Brown got pulled over outside Oracle and Pop saw the whole thing! ? Full interview soon at https://t.co/lFaHXQzScT pic.twitter.com/Uyg1TwRt0f

This gets really good around 1:20, where he’s describing what happened as he tried to enter the players’ section of the parking lot:

“And a cop out of nowhere pulls in front of me and goes, ‘Hey, you! Stop!’ And I’m like (points to chest) ‘Warriors’ acting coach!’ And he’s like, ‘I don’t care! Hey, you! Stop!’ And I’m feeling myself a little, ‘Am I going to be bullied by the Oakland PD or the San Francisco PD in my own building, in front of it?’ So I start to go a little bit, and another one pulls up and goes, ‘Hey, you! You heard him! Stop!’ So I go, okay, I own a motorcycle, so if I scoot a little closer to them, they’re going to get scared, because I would get scared. So I scoot forward and then an SUV pulls up, PD, and I hear them over the loudspeaker, ‘Hey, you, in the Range Rover, stop right now. You heard the officer. Stop! So then I was scared, I’ve got five cops around me.”

Sadly, that video cuts off there, but Brown went on to describe the best part, the call he got shortly thereafter from Spurs’ head coach Gregg Popovich.

“So I just stopped. And I’m like, ‘I’m just trying to get to the game.’ So I let the bus go, and the 18 cops, and I’m going around behind the bus, and I get this phone call, ‘Gregg Popovich.’ So I answer the phone, and Pop is dying! He goes, ‘Mike, I didn’t know that was you! I’m sitting here, I see this black Range Rover, I see all the cops around it, I see him inch forward, I’m like ‘He’s about to get arrested!” And I said, ‘Pop, this is my own building!’ And he said ‘I know! When I saw it was you, I died laughing!’ So, that’s why I’m late. I’m sorry.”

That’s quite the story, and it certainly seems to be a pretty good excuse for arriving late.