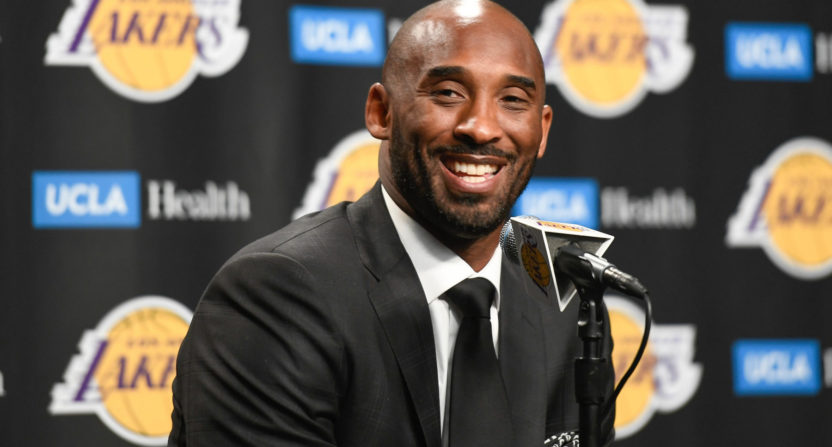 A day or two after the fact, it does not fully register that Kobe Bryant passed away. I, like many, woke up on Monday morning expecting Bryant’s death to have been a tragic dream. It had seemed like a hoax when TMZ reported it on Sunday afternoon. In terms of pure shock, and considering the eternal cultural relevance of Kobe, this is one of the worst sports tragedies in our collective lifespans. We lost an icon who uniquely symbolized so many sporting and human ideals.

Even more tragic, we lost Bryant’s 13-year-old daughter Gianna, who along with three other daughters and wife Vanessa was the light of Bryant’s life. We can’t talk about Bryant’s passing, and his legacy, without also talking about Gianna’s. She was certainly her father’s daughter. She was going to star in the WNBA. She asked her dad to buy her League Pass. She pulled her jersey up to her mouth during games. It is a testament to her and the Bryants that I, a person who has never met or even seen them in person, am able to sing her praises from afar.

Bryant is one of the most revered athletes of the 21st century, and one of its most famous. We all know the relevance that he holds. Whether that’s shouting “Kobe!” when shooting anything anywhere, posting up and shooting fadeaway jumpers at every opportunity, or proclaiming “Mamba Mentality” when you’re persevering through any sort of personal difficulty, big or small, he seemed like he would have an omniscient presence forever. He should be too unbreakable to die.

So, then, what is Kobe’s legacy? Almost every retrospective seems to emphasize the “complicated” nature of it. I do not disagree that it is complicated. Kobe contains multitudes, and to fully understand the man and why he is significant, we have to consider all of them. His sexual assault case from 2003 can’t be an afterthought. Another life was affected forever.

Much of the discussion over the years about that case has centered on its place in Bryant’s career, and its status almost as a personal obstacle for him. We shouldn’t gloss over it or mention it in passing before going back to basketball. I recommend reading Zito Madu’s Twitter thread on this issue, the gist of which is that we can grieve and honor Kobe while also considering, with full mind, the other side of the coin.

We try our best to fit people into satisfying categories. We want them to nestle into particular archetypes. Famous people are good or evil, positive or negative. It is simpler when we can judge people solely by their work, and simply discuss whether you liked watching Kobe or LeBron more, but that is not always the case. You can certainly debate Kobe’s place in basketball history to your heart’s content, but as Zito noted, Kobe’s situation epitomized the flaws with how our culture treats rape. There are multiple angles to Kobe Bryant, and it is easier when you accept that those sides do not have to offset each other. They can both exist, positive and negative, and we can think about them both.

In a similar vein, Bryant deserves to be praised for everything that happened after the case. He was a devoted and loyal husband. His daughters were everything for him. Their influence is clear. He was a prominent advocate for women’s sports, the WNBA and women’s college hoops in particular. When he started the Detail series on ESPN+, he alternated between analyzing NBA and WNBA players. You know Gianna loved watching those episodes.

Kobe’s retirement could not have been set up better. He was doing everything he wanted to do outside of basketball, writing bestselling children’s books and making an animated short called Dear Basketball that won an Oscar. After working so hard for so long to become a basketball legend, he was able to settle down with his beloved family and enjoy the fruits of his labor. It is sad that he won’t be able to see it out.

As a basketball player, Bryant was the platonic ideal of pure competitiveness and will to win. He was, more than anyone else, a product of the Michael Jordan era. He is so beloved by a section of NBA fans because his successes stand out so much. When he hit clutch jumpers late in games, and poured in 40 points in solo efforts to pull out wins, it was obvious that he was someone who could not handle losing, and did not tolerate those who couldn’t match his level. He had a way of overshadowing his failures.

There are fans who see Kobe as a symbol of a bygone era. Complaints when LeBron James rests on defense, or when Kawhi Leonard load manages, originate in nostalgia for Kobe and MJ. I don’t think there is any reason to doubt the competitiveness of today’s stars, but Kobe was on another level in terms of pure fire and drive. There aren’t many who give off the sense of competitiveness that he did. We want our hero athletes to be like that, and Kobe certainly lived up.

Thus why it is so difficult to see Kobe go. He had an enduring, everlasting quality.

Along with LeBron and MJ, Kobe Bryant the guy people come up with when they think of basketball. As we look back and mourn Kobe with a wide lens, we can remember one thing: That kind of fame does not truly go away.