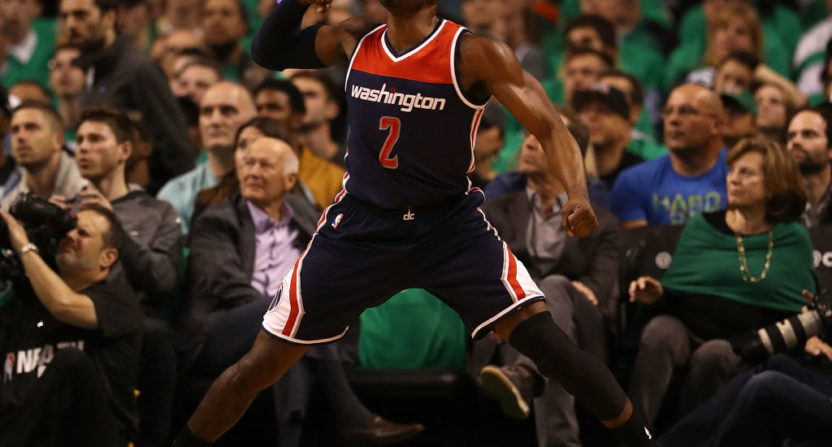 On Thursday, the NBA released their All-NBA teams and the end result meant Paul George is likely going to miss out on around $30 million, while John Wall is poised to cash in.

Here are the All-NBA teams along with players who fell short.

NBA announces All-NBA teams. Neither Paul George nor Gordon Hayward made it. Thus, no supermax for either this year. pic.twitter.com/GbHl82Ss9G

George received 40 points, the fifth most among players who didn’t make an All-NBA team. As a result, he’ll lose out on a quite a bit of money.

Gordon Hayward and Paul George miss out on All-NBA and are no longer eligible for the DPVE supermax. This summer just got really interesting

Approximately how much is a supermax extension? Just ask John Wall.

If George made any of the three teams, he would’ve been eligible for the designated player exception supermax contract for five years and around $210 million from the Indiana Pacers, more than Wall can get. But because he didn’t make one of the teams, the most George can get is a five-year $180 million deal from the Pacers.

That’s a $30 million hit because he didn’t make one of the teams. If George leaves Indiana, teams can only offer him four years and around $133 million, which is just about $80 million *less* than if he made one of the All-NBA teams and re-signed with the Pacers. That’s brutal.

Because he also didn’t make an All-NBA team and finished with only 27 points right behind George, Gordon Hayward is in a similar position where his potential contract for the next couple years will be for a lot less than what he could’ve gotten if he made an All-NBA team.

While George and Hayward miss out on millions, Wall gets to bathe in it. Here is how some other players were impacted DVPE wise by the All-NBA teams:

Jimmy Butler earning All-NBA has no impact on DPVE status.

Butler is ineligible because he is one-year short of the criteria.

All-NBA honors would have made Klay Thompson eligible in 2018.

Thompson will now have to earn All-NBA in 2017-18 to become eligible.

Thanks to the current NBA CBA, the DVPE contract for a new team to sign one of these guys is around 4 years/$168 million. If a team resigns their own player who has qualified for the DVPE, they can offer more, and that higher amount depends on the team and their payroll. That’s another reason why George lost so much money, because if he was named to an All-NBA team, the Pacers would have a $77 million advantage over other teams compared to $47 million since he didn’t make an All-NBA team.

In other surprising non-contract related news, the Golden State Warriors’ starting lineup consists of five players that could be the best player on multiple teams. Despite having arguably the best team in the NBA, none of its players made the All-NBA First Team.

At first glance, the All-NBA first team makes perfect sense. Especially because James Harden and Russell Westbrook are the frontrunners for the MVP, thus forcing Steph Curry out of the guard position.

As for the forwards, the same can be said about Durant vs. Leonard vs. LeBron. Kevin Durant missed some time and Kawhi Leonard and LeBron James had great MVP caliber years. Hence why Durant missed the First Team roster.