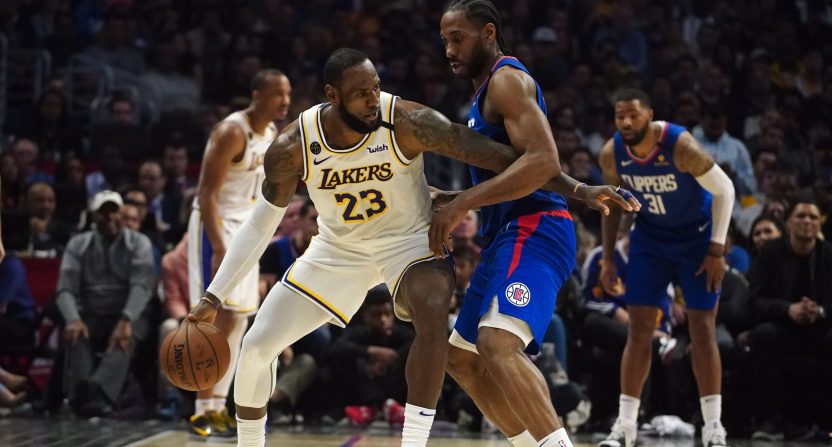 It’s difficult to get better quickly in the NBA. But here are five teams that could reach the playoffs in 2022-23 and possibly make a run after missing out on the postseason this year:

The 2021-22 Los Angeles Lakers were one of the most disappointing teams in NBA history. For the Western Conference preseason favorite to finish with a losing record was astonishing. Blame injuries. LeBron James, Anthony Davis, and Russell Westbrook played only 21 games together. James’ once indestructible body has a lot of miles on it, and Davis is routinely in the shop.

But even when the Big 3 was on the court, the Lakers’ record was only 11-10, partially because Westbrook never fit in, suffering the worst season of his career. Despite an old roster and limited flexibility to change it (no draft picks, no cap room), L.A. could be much improved. It’s going to come down to health. James and Davis must be available for at least 60 games. Will Westbrook stay? His expiring contract ($47 million player-option comes off the books after next season) is a tradable asset. If Westbrook can’t be moved, the new coach must figure out a way to use him/motivate him.

No team could get a bigger boost than the Los Angeles Clippers. Having Kawhi Leonard and Paul George for a full season makes them a contender. Leonard sat out all of the 2021-22 season due to a torn knee ligament he suffered in last summer’s playoff. The last time Leonard finished a season (reasonably) healthy, he powered the Toronto Raptors to the 2019 championship. While the days of Leonard playing 70 games might be over, the goal is to get him ready for the playoffs. If he’s close to what he’s been, Leonard is one of the league’s premier two-way players.

George was plagued by an elbow injury and appeared in just 31 games. When he was on the court, the Clippers were 18-13, and George averaged 24.3 points, the second-highest of his career. In an ideal world, Leonard, George, and mid-season trade acquisition Norman Powell (21.4 ppg in only five games due to a fractured bone in his foot) would form their own Big 3.

For the first time since LeBron left (the second time), there’s optimism. The Cleveland Cavaliers haven’t made the playoffs since that 2017-18 season. They came close this year but were eliminated in the play-in tournament by the Atlanta Hawks. Still, this was a major success and surprise for a team that had a preseason win total of 27.5, the fifth-lowest in the league.

Cleveland won by smothering people with their young, long, and athletic seven-footers: Evan Mobley and Jarrett Allen. The Cavaliers owned the fifth-best defensive rating. Three of the four teams ahead of them reached the conference finals: the Boston Celtics (No. 1), Golden State Warriors (No. 2), and the Miami Heat (No .4). Cleveland also has a go-to scorer in All-Star Darius Garland. The 22-year-old enjoyed his best season, finishing third in the voting for the NBA’s Most Improved Player award. Cleveland’s biggest question: will they keep veteran Kevin Love? He has value (39.2 three-point percentage), and a trade could bolster the roster.

The Charlotte Hornets improved from 33-39 the previous year, surpassing their preseason win total of 38.5. And yet, you get the feeling that they underachieved. For the second straight year, the Hornets were bounced out of the play-in tournament. Coach James Borrego paid the price and was fired after four seasons.

The organization is still in the midst of a coaching search. One of the more intriguing names is point guard whisperer Mike D’Antoni. His system helped turn Steve Nash and James Harden into MVPs. He could do the same for LaMelo Ball.

Ball turns 21 in August and is already one of the league’s brightest stars. The 2020 Rookie of the Year was even better in his sophomore campaign. Unlocking Ball’s full potential will help boost the Hornets into the postseason. Assuming the team holds on to restricted free agent Miles Bridges, Charlotte has enough talent. Even if they trade away Gordon Hayward.

Gregg Popovich has yet to formally announce that he’ll return for his 24th season. Assuming that the 73-year-old is back, he probably wants to leave the organization in good shape before handing the baton to another generation. The good news is that the San Antonio Spurs can improve with the third-most salary cap space ($22 million) in the league and a lottery pick. One possibility could be Phoenix Suns center Deandre Ayton, an unrestricted free agent. It seems unlikely that the Suns would let him walk. However, they had the opportunity to sign him to a max extension and balked.

Ayton will be 24 in July and is just scratching the surface of his potential. The 6-foot-11 center is already a defensive presence. Even if the Spurs can’t land Ayton, they have a solid building block in point guard Dejounte Murray, who finished second to Ja Morant for the Most Improved Player award. Forward Keldon Johnson also looks like an emerging star.