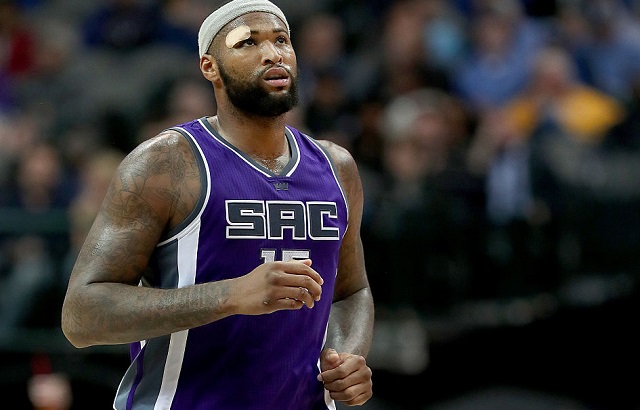 Trade season is officially open in the NBA.

If you didn’t realize it, Dec. 15 is a date of some importance in the NBA. Maybe it ultimately won’t be as important as Feb. 23 (the trade deadline) and nothing of particular historical note happened on this day in league history.

But Dec. 15 marks the first day that free agents signed over the summer are eligible to be traded, meaning that Thursday marks the unofficial opening day for NBA trading season.

So who’s on the very early list of players who could get dealt before the Feb. 23 deadline? Here’s a quick look:

Boogie is going to be atop everyone’s list of rumored names going forward. Cousins has just one full year remaining on his contract after this one, and now may be the optimal time for Sacramento to recoup the most value for him before he becomes an expiring contract.

Boston has long been rumored to be Cousins’ top suitor, but there are a whole host of teams that would love to get their hands on the All-Star center. The Kings are actually in the ninth spot in the Western Conference right now, and it would be tough to envision the team trading Boogie if it’s within relative striking distance of its first playoff berth since the 2005-06 season.

As Cousins told ESPN’s Marc Stein last week, he doesn’t know anything and it’s truly too early to tell.

Dallas has been far and away the most disappointing team in the NBA this season, starting out 6-18 while Dirk Nowitzki has missed all but five games, tied with the Sixers for the league’s worst record.

Bogut is on the last year of his contract and chose to go to the Mavs over Houston during the offseason. The Warriors gave him that option while trying to free salary in July to pursue Kevin Durant. But Bogut probably wants to play for a winner, and sources tell ESPN’s Tim MacMahon that he would likely get a late first-rounder for him.

Stein said that Portland, who lacks rim protection, could be a potential Bogut destination.

While Gay is trying to stay positive in Sacramento, as we detailed a couple of weeks ago, he recently changed agencies to Jay-Z’s Roc Nation outfit. When a player changes agents, he’s usually unhappy about his current situation.

Oklahoma City still feels like a logical destination for Gay, who’s on the last year of his contract.

Knight was essentially chosen by the Suns as a future foundational piece ahead of Isaiah Thomas, who was traded to Boston in The Great Point Guard Swap of 2015. After acquiring Knight from Milwaukee, he was given a $70 million contract that summer.

Knight has started just four of the team’s first 25 games and is shooting under 38 percent from the field this season. His win shares per 48 minutes, per Basketball-Reference, is .01. The average WS/48 for an NBA player is .1. He’s been a huge disappointment, and Phoenix will likely look to offload Knight this season if it can.

Nerlens Noel slams it home for his first 2 points of the season!#MadeInPHILA pic.twitter.com/oK2gW6riQl

Noel finally played his first game of the season on Sunday coming off minor knee surgery, scoring eight points in 10 minutes with no rebounds or assists. He did not play on Wednesday against Toronto.

With Philly’s frontcourt super-crowded with Joel Embiid, Jahlil Okafor, Dario Saric and Ersan Ilyasova, Noel has reportedly intimated, per Stein, that he’d be best suited elsewhere. Noel is still just 22 and averaged over 11 points, eight rebounds and 1.5 blocks per game just last season. There would be no shortage of interest in Nerlens if the Sixers elect to put him on the market.

There hasn’t been movement on this front in months, but as long as the Heat have one of the league’s worst records, there’s a chance that team president Pat Riley could elect to bottom out and deal Dragic — another member of the 2015 swap meet — to improve its standing in the lottery.

In October, Basketball Insiders’ Mike Scotto reported a rumored deal that would’ve sent Dragic to Sacramento for Gay and point guard Darren Collison. Dragic still has at least two more full years left on his contract after the Heat maxed him out, but teams looking for an above-average point guard with excellent driving ability could do far worse.

** At 8-18, New Orleans is once again struggling to put the right pieces around megastar Anthony Davis. A player who is “very much available,” according to CSN, is big man Omer Asik, who has at least two more full years on his contract. Tyreke Evans, who’s on the final year of his deal, could be another potential trade chip for the Pelicans, assuming they remain out of contention.

** Also in the CSN piece linked above, is an interesting note that the Magic (who lack scoring) and Rockets (who lack reliable interior defense, aside from Clint Capela) would make good trade partners. If Orlando falls out of the playoff picture and feels it won’t be able to re-sign Serge Ibaka, he would be a phenomenal trade piece for a contender. The Magic would also be able to shop the disappointing Jeff Green, who’s shot under 40 percent from the field and under 30 percent from three after signing a one-year deal with Orlando over the summer.

** It’s obvious that the Brooklyn Nets are building for the future, and Brook Lopez is the one obvious name that could help general manager Sean Marks build a roster lacking in young talent. Yahoo Sports’ Adrian Wojnarowski said on a podcast, however, that Brooklyn won’t give Lopez away and is more likely to trade him next season in the final year of his contract. Another possibility could be veteran big man Luis Scola, who’s on a very team-friendly one year deal.