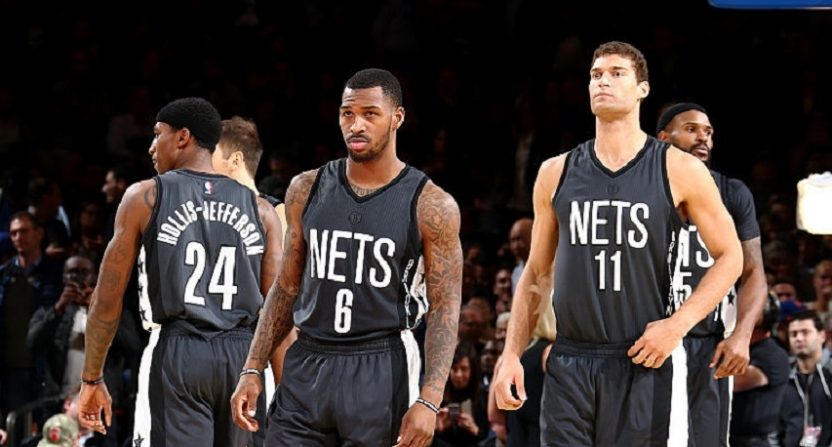 From an outsider’s perspective, it’s quite difficult to imagine how the worst team in the NBA measures progress.

Losers of 12 games in a row and 14 straight at the Barclays Center — without control of their first-round pick for two more years — the 9-45 Brooklyn Nets are trying to take a reasoned and incremental approach to what will be a long and arduous rebuilding process.

Earlier this week, several Nets players and first-year head coach Kenny Atkinson spoke to The Comeback about how they stay positive, maintaining focus and poise in an extremely dark season.

“First of all, I measure it in attitude and buy-in,” Atkinson told The Comeback.

After head coach Lionel Hollins was fired and longtime general manager Billy King stepped down from his role on a quietly frigid Sunday morning in January of 2016, Brooklyn hired former San Antonio Spurs executive Sean Marks as general manager and Atkinson — an assistant coach with Atlanta praised for developing young players — to stop the franchise’s bleeding and steer the Nets in the right direction.

“We obviously have some issues we have to get over, but I like the buy-in, I like how hard the guys are playing, the style we’re playing. That being said, we’ve got a long way to go to get over the hump.”

Brooklyn allows 114 points per game, the worst scoring defense in the league, and are 29th in offensive efficiency, 26th in defensive efficiency and turn the ball over more than any team in the NBA.

Veteran forward Trevor Booker, 29, said he knew the team would be in a rebuilding stage when he inked a two-year contract with the Nets over the summer, but said “the biggest thing is we’re trying to stay positive through all of it.”

“We didn’t set any goals by trying to go out and win a championship or something like that,” Booker told The Comeback. “We’re measuring everything by how we improve during the season.”

Atkinson is teaching his team to run. Brooklyn leads the league in pace, averaging 101.5 possessions per 48 minutes, according to Basketball-Reference. An inexperienced roster playing faster than anyone else is the main reason why the Nets turn it over so much. Keeping up with the modern NBA, Brooklyn is taking the fourth-most threes in the league, but only converting on 33.9 percent of those attempts, the fifth-worst percentage in the league.

For Brook Lopez, the team’s best and longest-tenured player, this rebuild must be especially tough. Constantly involved in trade rumors — the latest report has New Orleans showing interest in the 28-year-old — talked to The Comeback about how he sees progress beyond wins and losses.

“We obviously can look at personal growth, personal improvement and team growth,” Lopez said. “Obviously I think we’ve incrementally improved, it’s just being better for longer and being more consistent. It’s tough. We have a lot of young guys, a lot of guys who haven’t had a lot of experience in the league.”

One of those players is 27-year-old guard Sean Kilpatrick, who bounced around between the D-League and short stints in Minnesota and Denver before finding his niche with these Nets as a rotation sparkplug who can hit threes and rebound fairly well for his position. Thanks to the team’s new culture and familiar atmosphere, Kilpatrick finally feels like he’s found a steady and stable home professionally.

“The way management and coaches connect with the players is something that every player basically wants,” Kilpatrick told The Comeback. “To really have that type of security and knowing basically, I’m home now, this is a home for me… Everyone here has a different perspective on how things should be ran here. That’s a type of coach that you want to be a part of.”

Kilpatrick said sharing the ball more on offense and playing better defense is something he’d like to see the team accomplish, but just making strides and improving every day is what he looks for.

“Us being able to play together is something that’s part of our culture and something we’re trying to get in the minds of the young guys,” he said.

Though he’s not as young as Brooklyn’s core group of youngsters —  which features 2016 draft picks Isaiah Whitehead, 21, and Caris LeVert, 22, 2015 picks Rondae Hollis-Jefferson, 22 and Chris McCollough, 21 — Joe Harris appreciates the culture Marks and Atkinson have installed here. Harris, 25, a sharp-shooting wing who spent the last two years buried on Cleveland’s bench, also stressed how the team is focused on daily, incremental improvement.

“If our expectations were based off of wins and losses, obviously we’d be in a pretty tough spot right now,” Harris told The Comeback. “They don’t treat it like we’re the worst team in the NBA. It’s more the fact that our main focus is coming in — whether practice, or game or whatever’s going on that day — the focus is on that day and trying to improve and get better.”

Harris and Booker both agreed that having a generally positive group of players, and a positive management group, definitely has helped.

“We don’t have too many pessimistic or negative guys on the team,” Harris said. “Obviously, we’re all competitors in here and we all have our egos and arrogance at moments. But for the most part, everybody stays very positive and we’re all encouraging of one another.”

Brooklyn, with short-term cap room to spare, will likely try to make small moves before the Feb. 23 trade deadline to take on salary if it means getting young players or draft picks in return.

The slow, daily improvement that the team is preaching is a lot like the Nets’ rebuild.  It will come slowly. It will require patience. And it will definitely require a positive attitude from both players and management, even as it’s going through by far its worst season in several years.