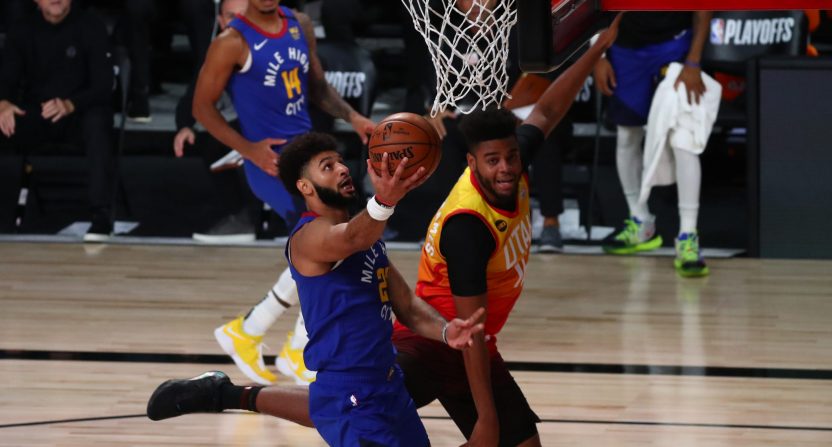 This Denver Nuggets-Utah Jazz first-round series has produced one of the most entertaining individual duels in recent NBA history. In a playoffs marked by isos, Donovan Mitchell and Jamal Murray have feasted as superstar shooting guards, reigning threes and single-handedly driving their teams to wins in the fourth quarter.

But he wasn't done. Jamal Murray with the dagger triple for 50. pic.twitter.com/RL4S8Bea63

Now that the Nuggets have climbed back from a 3-1 deficit, neutral fans will have the pleasure of a Game 7. Murray has been extraordinary in the past three games despite a two-point Game 4 loss. He has 50, 42, and 50 points on remarkably efficient shooting, pouring in three-pointers at a rate that rivals any Stephen Curry performance. With 6.7 assists per game, he’s also distributing the way a go-to guard would be expected. Mitchell and his 38.7 points per game have certainly responded in kind.

Game 7 might come down to Mitchell vs. Murray in the clutch (hopefully it does!), but the game will be about a lot more than that. There’s the return of Gary Harris, who played 20 minutes off the bench in Game 6. There’s Nikola Jokic’s offensive output, including how well he shoots from three. And there’s the mismatches that the Jazz will continue trying to exploit, particularly Jokic’s weak rim protection and Michael Porter Jr.’s flimsy one-on-one defense.

Let’s take a closer look at some of the more interesting tipping points:

Can the Jazz defend Murray?

Royce O’Neal bodies him pretty well, but Denver has put Murray in positive positions in the past couple of games. Off-ball pindown screens with Murray catching the ball at the top of the key can be deadly, given Murray’s quickness on the dribble and shooting threat from deep. Any player in front of Murray who can’t stay in front of him will be exposed. Often, that player ends up being Mitchell and Joe Ingles on switches.

Where Murray has been the most deadly, though, has been on off-the-dribble threes when he comes off a screen. Rudy Gobert’s long-armed athleticism should be enough to provide a reasonable contest, but Murray has been willing to launch from deeper behind the line, rendering Gobert’s presence essentially meaningless:

Gobert will have to do more in those situations if the Jazz are going to have any chance of diminishing the effectiveness of those shots.

Late in the game, Murray’s snakey dribbling and shooting versatility torched Utah. Even when the Jazz corralled him into a (slightly) lower-percentage midrange shot or floater, Murray found a way to put the ball in the hoop. He has shown an increased maturity on the ball, navigating crowded spots on the floor and seeking out the best possible play. He has pulled the trigger from anywhere.

Utah can bet on two things: 1) things will go better if you get Murray off the three-point line and trust Gobert and co. to protect the rim, forcing a midranger; and 2) there’s no way Murray hits some of the deep threes he has in the last three games. He was 9-for-12 in Game 6. Keep using Gobert aggressively as a help defender. The Jazz’s defensive scheme has not been bad enough for serious worry. A quicker man-to-man defender to stick on Murray is probably the biggest thing they’ve been missing.

Gobert has been an impactful defender on Murray and Jokic, even when the ball goes in the hoop. His mere presence in the lane remains influential, and his containment of Jokic’s crafty buckets has necessitated Murray’s superstar rise. He can affect Murray’s shots at the rim:

O’Neal, wiggling over the screen, is worried enough about Jokic’s spot-up at the top of the key to let Murray go briefly. Gobert, once he realizes Murray is maneuvering off the three-point line, drops to the paint and essentially concedes a midrange jumper. While O’Neal probably could’ve done a bit better on the contest, that’s not a bad result at all for the Jazz. It’s not a three and it’s not a layup.

We know primarily what Mitchell will do: seek out subpar defenders and attack them off the dribble. Interestingly, Porter’s negative defensive impact has been generally mitigated over the past couple of games, after Mike Malone had to pull him off the floor at points early in the series. As the Nuggets have stabilized defensively, Porter is no longer getting pulverized. Since Game 4, Denver is 20 points better defensively with MPJ than without him.

There’s a good amount of noise in that statistic, but it at least indicates that Porter isn’t getting played off the floor. Mitchell has targeted other players — pretty much anyone who struggles to stay in front of him, which is a wide range — and found success in similar ways as Murray. He pours in threes off of screens, hunts make-able midrange shots, and dives to the hoop.

The clearest Nuggets defensive weakness has been Jokic. In contrast to Gobert’s all-encompassing arms and soft feet, Jokic struggles with mobility and consistently loses battles with Mitchell, Mike Conley, and Jordan Clarkson, the Jazz’s triumvirate of ball-handling guards. Gobert, in addition, has had a quietly productive offensive series going at Jokic.

When Mitchell uses Gobert’s expert screens, Jokic has no chance at contesting threes:

He plays drop coverage, in part because he isn’t quick enough to get out and contest without either coming up short or getting blown by for a layup. At the rim, he’s offered futile resistance:

There’s a reason Jokic’s defensive rating has been so bad for much of the series. Per NBA.com, he has conceded buckets on 29-of-41 attempts when he contests a shot at the rim, a ghastly field goal percentage of 70 percent. That’s a tiny sample size and Gobert doesn’t look that much better (61 percent), but it speaks to a wider issue with Jokic’s defensive presence.

Denver has been a bit better on defense since earlier in the series, but they’re still getting by on ridiculous offensive performances from Murray. This is a particularly bad defensive matchup for Jokic, and he’s approaching liability status at this point.

Anything can happen in an individual game. There are players on both teams that could plausibly have bigger games than expected and change the proceedings. Most notably, Conley has the skills to post a huge performance alongside Mitchell. A Joe Ingles run — not without precedent! — could take some pressure off Mitchell throughout the game.

For Denver, Harris’s return provides them another capable ball-handler, though Harris didn’t do much scoring in his 20 Game 6 minutes, and he didn’t have a great regular season. Porter has been pretty quiet offensively. He plays the minutes and has the shooting to flip Game 7 on its head. There will be shots available on the wings for Jerami Grant and Torrey Craig as Murray and Jokic run their pick-and-rolls. Jokic had nine assists in Game 6.

There are plenty of little factors that could change the way Game 7 goes. But most likely, it will be up to the stars late to find buckets. The potential for another electric Murray-Mitchell back-and-forth makes this a highly-anticipated elimination game.