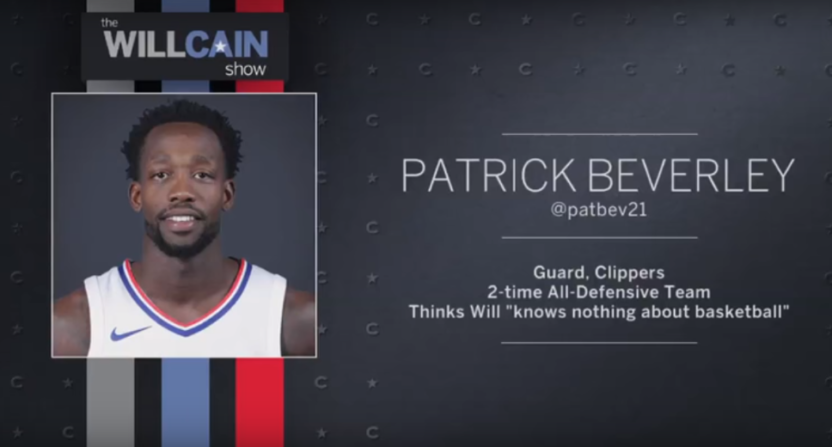 Los Angeles Clippers’ guard Patrick Beverley is recovering from season-ending knee surgery, so he apparently has a lot of time on his hands. For some reason, he used that time to watch First Take Wednesday, and made his disagreement with Will Cain about the Cleveland Cavaliers very clear with some tweets, including one saying that Cain “knows nothing about basketball!”

If that was where Beverley left it, that would be notable enough. Athlete beefs with ESPN and Fox’s self-proclaimed master debaters are always fun. But Beverley took it to a new level, calling into The Will Cain Show (formerly Russillo and Cain) to express his dissension on-air. First, here are his tweets:

@stephenasmith I’m convinced that @willcain knows nothing about basketball!!! Nothing!!!! Just reading stats!!!

I’m convinced you’re a good player Pat, so I guess I should revisit that.

In the meantime, I won’t be extrapolating two games into infinity. https://t.co/hd7HWWoEZ3

On what? You being a good player or the Cavs? The stats aren’t and weren’t my argument. They are there to support the conclusion.

In order for u to come to a conclusion. You have to factor in everything. The pressure off a guy after trades, the feeling of a fresh start, since of, I don’t have to relocate!! All of that is a factor. Nothing to do with stats!!! https://t.co/nzT3KelMOj

Ok. Let’s back up. What was my conclusion? It was that the Cavs were not a lock to win the East. And that what we’ve seen on an individual and team level isn’t sustainable.

Well since I’m in the West I can speak about that but not right now because we play Boston tonight!!! #KnowWhenToStop https://t.co/ZyycDSD3J5

And here’s the discussion on Cain’s show:

Here are part of Beverley’s comments:

“It’s not your fault, and it’s not only you. For people to be able to understand what goes on in the NBA every day, games, being hot, being cold, going through normal things, all of the outside people from basketball, in order for them to understand how it really is made up, it kind of goes sometimes.”

“You spoke about the Cavs and said they won’t come out of the East. …Of course I’m not playing this year so I’m able to be a fan this year. Any basketball player will tell you, no matter what team… and it’s hard for us to say it, as basketball players it’s hard for us to say it, but as basketball players we have to come to the truth. Any team LeBron James is on is a lock to come out of anywhere – except in the West, because the West is a different monster. But in the East…you have to give every team out there respect. Brad Stevens has done a hell of a job with Boston. Toronto has been playing their [expletive] off. It’s a lot of good teams, you know? But, you know, it is LeBron James.”

Cain then tries to argue that this was the case with the old Cavaliers as well, but Beverley says it’s different because of the new players they have who fit into that amazing role player mold more:

Beverley makes some good points there, but Cain further explains his case too, and this is actually a reasonable discussion on both ends. (Perhaps because it didn’t take place on First Take.) And it’s cool to see Beverley both call in to back up his Twitter take, but do so in a smart and reasoned manner, and to see Cain engage with him and his argument rather than just trying to shout him down. Beverley may not be playing right now, but his media game’s at a high level, and it wouldn’t be surprising to see him get more opportunities in that field at some point.