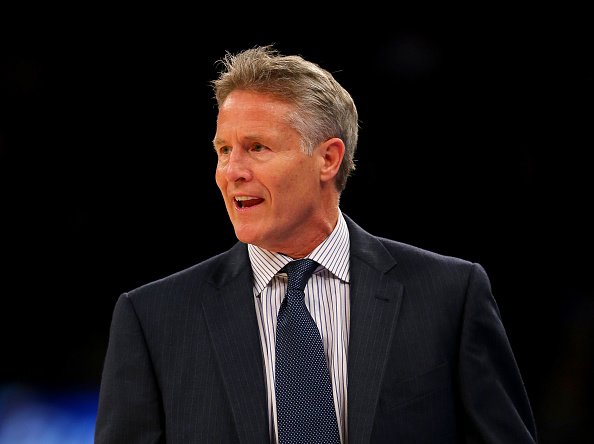 The Philadelphia 76ers may have the NBA’s worst record at 1-22, but they’re still very impressed with the job head coach Brett Brown is doing, and rewarded Brown with a two-year extension on Friday night:

Philadelphia 76ers President of Basketball Operations and General Manager Sam Hinkie announced today the team has agreed in principle to a contract extension with Head Coach Brett Brown. Per team policy, terms of the agreement are not disclosed.

“Brett has been everything we anticipated – and more – both as a basketball coach and a partner in building this program,” Hinkie said. “His tireless work ethic, his daily desire to consistently improve, and his resiliency line up with our core values as an organization. It was not difficult to come to the decision to formally say we want to work with Brett Brown even longer.”

This idea may seem laughable to some on the surface, but Brown has dealt with incredibly awful rosters since becoming Philadelphia’s head coach in 2013. The Sixers’ 38-149 miserable record under Brown has nothing to do with the job he’s done; it’s simply a matter of the the team having the worst roster in the NBA over that time.

Brown has been the face of the franchise through the gutting of the roster, often cobbling together lineups that consist of non-NBA-level talent. He has been active meeting with season ticket-holders and sponsors, trying to infuse his enthusiasm into that of selling the franchise’s future.

Brown has endured two-plus years of a gutted roster, saddled with a 38-149 record. Despite the losing, Brown has made a strong impression inside and outside the franchise for how determined and resourceful his undermanned teams have remained, and how poised he’s been in the face of one of the most taxing coaching assignments in NBA history.

Brown spent seven years as as a San Antonio Spurs assistant coach under future Hall of Famer Gregg Popovich before being named the Philadephia head coach on August 14, 2013.

The Sixers named Hall of Famer Jerry Colangelo the team’s Chairman of Basketball Operations on Monday, but Wojnarowski is hearing that the decision to extend Brown came before before that:

The Sixers’ move to extend Brown’s contract was made well before Colangelo became involved in the franchise, league sources said. Ownership and senior management were aligned on committing long term to Brown.

Brown admitted on Friday that the Sixers’ losing ways have been frustrating, but he’s confident they will be a winner by the time his new contract expires (2018-2019):

76ers coach Brett on his first 3 years: “I think sometimes you do get worn down. How can you not.”

Brett Brown says he believes the 76ers will be winners by the time his extension is up in 3 years.

For that to happen, Brown is going to need a much better roster to work with, but the Sixers seem to now have the right people in place to make that happen.