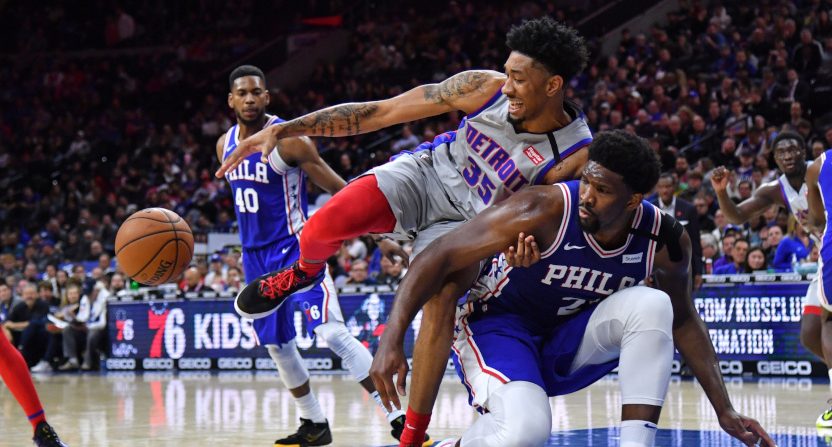 Countless sports have been canceled over the COVID-19 coronavirus pandemic, but the disease’s impact on the NBA has been particularly notable thanks to Rudy Gobert and Donovan Mitchell testing positive for it. And now, there’s a third confirmed NBA case: Detroit Pistons’ forward Christian Wood (who guarded Gobert in a game last Saturday). Shams Charania of The Athletic and Stadium broke that news Saturday.

Detroit Pistons‘ Christian Wood has tested positive for coronavirus, sources tell @TheAthleticNBA @Stadium. Wood had 30 and 11 rebounds against Rudy Gobert on Saturday night before a career-high 32 on Wednesday.

Sources say Wood has shown no symptoms and is doing well.

James L. Edwards III of The Athletic has more on the Wood case:

Wood is “100 percent OK” and “feeling fine,” per a source. Wood felt subtle symptoms of the virus on Thursday, and decided to get tested as a precaution. Wood has been in self-isolation since Wednesday.

…Wood is under the care of the Pistons’ medical staff and, along with his teammates, remains in isolation.

That could potentially lead to many more NBA cases of coronavirus. Beyond the possible danger for Wood’s teammates on the Pistons, he played against the New York Knicks Sunday (recording 22 points and eight rebounds) and against the Philadelphia 76ers Wednesday (where he posted 32 points and seven rebounds). So the players on those teams now have some concerns (especially those who primarily guarded Wood, which was Joel Embiid for the Sixers; Wood is seen above against Embiid), as do other team staffers and executives.

And given the current state of coronavirus testing in the U.S., it may not be easy to get the players who played with or against Wood checked quickly. But then again, we’ve already seen the NBA receive some priority here. At any rate, there’s certainly more for NBA players and team officials to worry about in the wake of a third positive test in the league.