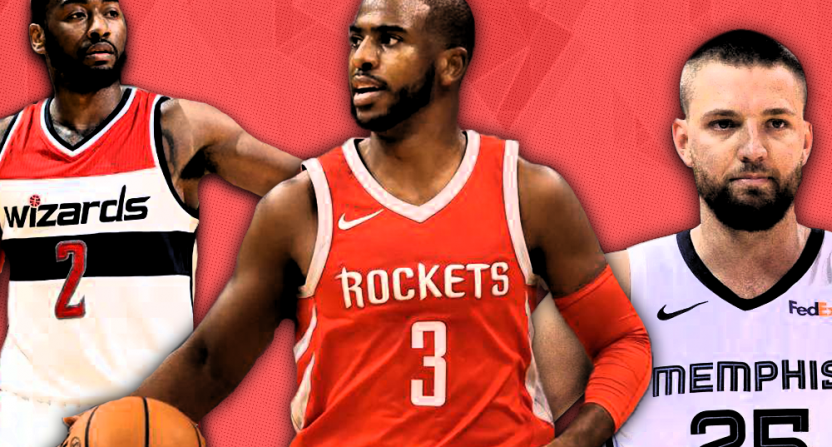 Signing players to big-time deals is always a risky move for NBA teams. While there’s a chance a long-term deal could work out and pay for itself eventually thanks to strong performances and winning, there’s also the chance it can become an anchor for a team’s salary cap situation. Here are 10 of the worst current contracts in the NBA.

Waiters proved to be an effective scorer for a Miami team in desperate need of one. Pat Riley rewarded the 27-year-old shooting guard with a four-year, $42 million deal. Almost immediately, the contract value cratered.

In 2017-18, Waiters struggled to find his shot, hitting just over 30 percent of his three-point attempts. He’d later miss nearly a year of basketball action after undergoing ankle surgery. After missing the first month of this season, Waiters has returned to the Heat, but he’s playing just okay basketball, averaging 10.7 points and 2.7 assists per game. He’s also posted only a 34 percent three-point success rate in 23.5 minutes per game. Averaging $13 million per season and barely getting over 10 points per game isn’t cutting it. For someone as shrewd as Riley, Waiters’ contract is probably one he’d like to do over if given the chance.

In Miami’s post-big three era, Whiteside came out of nowhere to become a star for the Heat. After averaging a robust 14.2 points, 11.8 rebounds and league-leading 3.7 blocks per game, Whiteside earned a four-year max with an annual average just under $25 million per season. The undrafted center earned the money in the ensuing season, averaging career-highs in points and rebounds. But one year later, his performance and effectiveness waned.

In 2017-18, Whiteside was given fewer minutes and usage in Miami’s offense and lost the trust of coach Erik Spoelstra with the game on the line. It didn’t help his cause that he can’t stretch the floor and thought very highly of himself. In today’s NBA, the 29-year-old just isn’t valuable outside his defensive impact. Whiteside’s not always engaged, keeping Spoelstra from playing him more than 25 minutes on a given night. He’s a lock to pick up his $27 million player option for next season – which is too much for a player with a skill set that doesn’t fit in the modern NBA.

In the summer of 2016, the Knicks and Phil Jackson outbid themselves for Noah. New York gave him one of the most absurd deals in NBA history despite clear signs he was on the decline and couldn’t stay healthy in Chicago. The 33-year-old center would play 53 games with New York – and spar with their former coach – before getting waived. The Knicks wanted to get rid of Noah so bad, they ate his $18.53 million deal and stretched the last year of his contract until 2022.

Surprisingly, Noah’s career was revived in Memphis as he’s become an effective role player – which is how he should have been treated and paid all along. There’s no way that New York was ever going to get the same value from Noah as they invested in him. Almost as soon as ink hit paper, the Knicks had a dead contract on their books.

There was a lot to like about Hayward choosing the Celtics as an unrestricted free agent back in 2017. Coming off a career-best season where he averaged 21.9 points and 3.5 assists per game with the Utah Jazz, the 28-year-old small forward reunited with Butler head coach Brad Stevens and joined a promising core of rookie Jayson Tatum and later point guard Kyrie Irving.

Unfortunately, Hayward played just five minutes before suffering a gruesome injury that knocked him out for the entire 2017-18 season. Back in action this year, Hayward still doesn’t look fully recovered. He’s started 17 of 54 games for Boston, averaging just 11.1 points per game with barely average shooting. It’ll take time for Hayward to get fully healthy, and there’s reason to believe he can be an effective player in the NBA. But, if he doesn’t return to form, his $30 million+ price tag for next season (and a $34 million player option in 2020-21) will be killer to the Celtics’ cap and contending chances.

After losing LeBron, Cleveland worked quickly to sign Love to an extension starting next season. The Cavs’ immediate plan appeared to be to stay competitive and give the 30-year-old power forward a bigger role in the offense. Unfortunately, Love would play just four games before undergoing toe surgery, not returning to the lineup until earlier this month. Cleveland bottomed out in his absence, and the Cavs currently have the third-worst record in the league with just 14 wins and 46 losses.

Betting on Love to stay healthy is a big risk. He’s getting older and will start declining sooner than later. It makes sense that the Cavs wanted to keep him around after getting dumped by the greatest player in their franchise’s history, but giving Love this much money was a mistake. He’s got upside remaining, but it’ll fade fast if he can’t stay on the court.

The Memphis Grizzlies overpaid Parsons during the wild 2016 offseason to secure an above-average three-point shooter with a nice two-way game. While the 30-year-old’s contract was abysmal from the get-go, there were still reasons to believe Parsons would fit nicely alongside Grizzlies stars Mike Conley and Marc Gasol. But coming off knee surgery, Parsons struggled to play healthy and never found his groove in Grind City.

Parsons would turn in one season as a semi-effective role player (albeit in 36 games) before, once again, struggling to stay healthy this season and getting benched by the Grizzlies despite being medically cleared. The small forward’s played just five games this season. and betting on him to finish the season healthy would be a mistake if recent history is any indication. Parsons is a sunk cost for Memphis at this point; buying out his last season (at over $25 million) and giving him a fresh start would seem best for both parties.

Charlotte paid a high-cost to re-sign Batum after acquiring him from Portland in 2015. On paper, it made sense. The Hornets weren’t exactly a huge free agent destination, and bringing in Batum, an excellent two-way player who wanted to stick around, sent a positive message about winning. Sadly, Batum’s personified Charlotte’s mediocracy.

After posting solid seasons in his first two years of his deal, Batum’s production dipped dramatically. The 30-year-old small forward’s lost a step, and despite getting paid like a number one/two option, he’s currently seventh in scoring for the Hornets. He’s a fine role player who can do enough things well to make a positive impact, but in no way is he worth $24 million this season, 25.5 million next season and $27.1 million (a sure-to-be-accepted player option) in 2020-21. With a rising contract and declined production, Batum’s deal looks untradeable.

Chris Paul proved to be a great fit alongside James Harden in his first season in Houston. However, after a decent regular season, the 33-year-old point guard struggled to stay healthy in the playoffs and continued to be plagued with injuries this season.

.@CP3 will miss Saturday’s game at Golden State with a right hamstring strain.

He will be re-evaluated after the team returns to Houston. pic.twitter.com/5gAdYas3Vo

Paul’s played in 36 games for the Rockets this year, missing time with a hamstring issue. In those games, he has been relatively productive, averaging 16.0 points, 8.3 assists and 2.1 steals per game. The problem isn’t Paul’s current production, it’s the fact Houston will have to pay him an average of $40 million plus for the next three seasons. For an aging point guard, that’s horrendous – even if it’s the cost of doing business to keep a good team together. If (more like when) Paul accepts his player option in 2021-22 he’ll be earning $44 million in just the final year of his deal. The Rockets better hope they win now, because getting rid of that deal will prove to be a huge challenge.

Keeping young talent around is paramount for success, especially for a young team. However, the Timberwolves’ investment in Andrew Wiggins has backfired tremendously.

Still just 24, Wiggins was inked to a five-year, max deal after enjoying a break-out season where he enjoyed career-highs across the board. It appeared the 2014 first-overall pick was going to springboard a breakout year into becoming a great player. But Wiggins’ production has now regressed to the point where Minnesota might be better off not playing him.

Wiggins has been insanely mediocre in 2018-19, averaging 17.9 points, 4.9 rebounds and 2.4 assists, while shooting 34 percent from three-point range and 39 percent from the field. The 6’8″ power forward takes way too many shots, is inefficient and isn’t a good defender despite being gifted athletically. It’s increasingly likely Wiggins won’t become the superstar many expected him to be when he was picked first and traded in a mega-deal for LeBron. He just hasn’t been able to put his game together and show any consistency. For a player owed more than $120 million for the next four seasons, Wiggins simply is not good enough.

John Wall’s next contract hasn’t even taken effect yet and it’s still, without question, the worst contract in the NBA.

Wall entered the 2018-19 season by disputing reports he was out of shape. It didn’t get much better from then onwards. The Wizards struggled badly, as Wall’s production declined: The 28-year-old point guard barely shot 30 percent from three despite more than five attempts per game, averaged just 8.7 assists, his lowest mark since 2012-13, and looked a step slower. After appearing in 32 games, Wall suffered a season-ending Achilles injury that’ll cause him to miss some of 2019-20 as well, when his max extension takes effect.

When healthy, there’s a small argument to be made Wall is worth a max contract. However, with injury issues and declining production, the $170 million due his way over the next four seasons is bad news for Washington. It’s a real possibility he’ll be getting paid $40 million next season and won’t play a single game. If he can’t stay healthy, Wall’s deal deserves consideration as the worst max deal ever.

1 thought on “Ranking the ten worst contracts in the NBA”