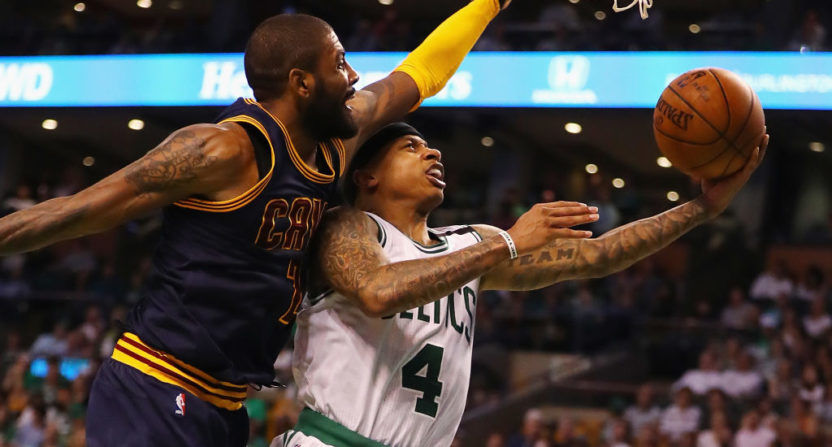 Cleveland and Boston have agreement on deal to send Kyrie Irving to the Celtics for Isaiah Thomas package to Cavs, sources tell The Vertical

Original analysis below. What a deal.

The Cavs unraveling has been perhaps the most interesting and most surprising story of the offseason, ranking just above the Paul George drama and the Gordon Hayward-to-Boston saga.

Now, it appears as though the Celtics might end up involved in all three of those issues, after having been a rumored destination for Paul George (and Jimmy Butler before him.) That’s thanks to this report from The Vertical’s Shams Charania, which has the disgruntled Kyrie Irving potentially going to Cleveland’s biggest Eastern Conference rival in Boston:

That would be a deal fraught with implications; at this point, Thomas might be the best player the Cavs could hope to receive back in a deal for Kyrie, but he’s only under contract through next season; Irving’s deal doesn’t expire until the summer of 2020. And with LeBron also perhaps, possibly, potentially, probably leaving next summer, that could mean they trade Irving, spend a year with LeBron and Isaiah challenging for the East, and then looking at an immediate rebuild. Crowder could either stay to be a part of that, or be moved for more assets, given the value of his play and (more importantly) his contract.

But hey, maybe the allure of playing together keeps LeBron and Isaiah in town, if they mesh well. It’s not inconceivable. And if they do leave, the Cavs would have a ton of cap space and, presumably, some quality draft assets they would have to pick up from Boston in this trade in order to account for the difference in Isaiah and Kyrie’s respective contracts.

That’s not a ridiculous outcome, given the circumstances. Not as ideal as Kyrie being happy and wanting to stay, of course, but hey, that might not be an option anymore.

The Celtics, meanwhile, would maybe not improve their team starkly this season (that depends on your opinion of Thomas’s and Irving’s respective skillsets), but they’d have Irving under contract alongside Hayward going forward, as well, and it would clarify their cap picture a bit in the near-term. (Re-signing Thomas may have been a longshot for them, given their constraints, and certainly not possible with Crowder there.) And if things blow up in Cleveland after this season, the Celtics would be in prime position to fill the Eastern Conference power vacuum for the few years after that.

Of course, none of this has happened yet. The Cavs thought they had Paul George, too.