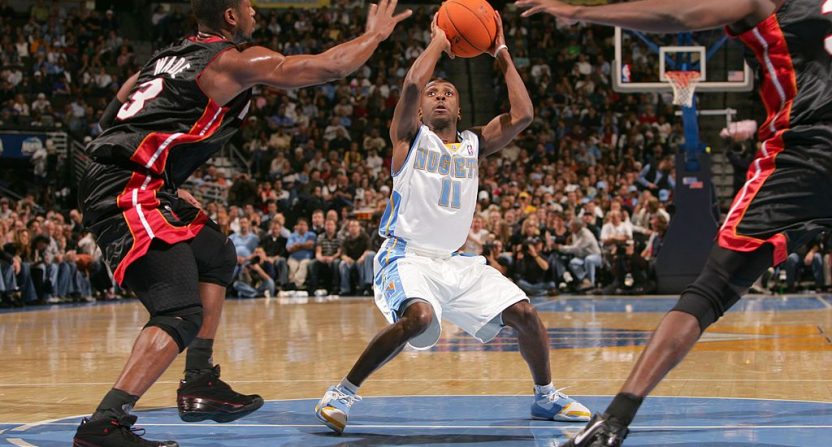 I am becoming irrationally excited for the BIG3, Ice Cube’s 3-on-3 basketball league set to launch later this year. Not only is Allen Iverson lined up to be a player-coach, but it will also feature some fun rule tweaks like a four point shot and each game being a race to 60 points. (With a four point shot in play, Antoine Walker better be involved in this.)

The league is designed for retired former NBA stars. And with Iverson and Ice Cube on board it definitely has the star power to draw in casual fans in the summer time once the NBA season has concluded. One of the remaining questions though has been just which other players would link up with Ice Cube, AI, and the BIG3 to round out the rosters.

Well, we’re beginning to gain some insights and the results look spectacular. The BIG3 announced a handful of former NBA players who have signed up for the inaugural season and it’s a mix of former All-Stars and some of the league’s most recognizable personalities from the last 15 years.

Here is the full release from the BIG3, just so you can see the entire list of names that are signed up to play in Ice Cube’s league. It’s a veritable “who’s who” of 1990’s and 2000’s NBA personalities including J.R Rider, Earl Boykins, Smush Parker, Mahmoud Abdul-Rauf, and more:

Sprewell, Rider, Boykins, Cook and Abdul-Rauf join Kenny Anderson, Smush Parker, Jamario Moon, Ruben Patterson, and Etan Thomas as the first players signed to the upcoming draft. The BIG3 will announce new signings each Monday leading up to the Draft.

Last week, the BIG3 also announced the name of the second team: Trilogy. Co-captained by Kenyon Martin and Al Harrington, Trilogy joins the 3 Headed Monsters as the first BIG3 teams.

Launched Jan. 11, the BIG3 will bring 3-on-3 half-court basketball, one of the most popular formats of the game worldwide, to arenas around the country this summer. With a player-focused structure and fan-centric experience, the BIG3 will feature fast-paced, highly-skilled, exciting and engaging play featuring legendary players and coaches.

In April 2017, BIG3 will hold a combine for all players in the draft pool. Player captains and co-captains along with the coaches and league executives will watch draft players compete in scrimmages, run drills, and complete strength and conditioning workouts. Following the combine, the BIG3 will hold a draft with each of the eight teams’ captains filling out their five player rosters.

The BIG3 will comprise eight teams of five players, one head coach and one assistant coach with games touring in 10 cities across the country.

Payton, Gervin, Barry, Mahorn and Drexler will serve as coaches, with Iverson serving as a player/coach – the rest are confirmed to play.

How could you not be excited about this???

The name that immediately jumps out is Earl Boykins, who shot to cult hero status in the early-to-mid 2000’s as a point guard on several teams. Boykins was one of the shortest players in modern NBA history at 5’5″ tall, but possessed incredible strength and shotmaking ability. Boykins averaged 8.9 PPG over a 13 year career, finding the most success with Denver and Milwaukee.

If you want a blast from the slightly more distant past, what about J.R. Rider? The former UNLV star was perhaps most known for winning the 1994 Slam Dunk Contest with the “East Bay Funk Dunk” that’s been emulated by many fellow dunkers over the years.

You just know there’s going to be a game where Davis forgets to take the ball back out behind the three point line just so he can get a triple double.

This is so fascinating given the variety in eras, ages, styles of play, and NBA success that are all going to be taking part. Sure, this could have an “XFL” vibe to it where the quality of play isn’t the best in the world given all of these guys are in their mid-30’s to late-40’s. Nevertheless, the novelty and nostalgia aspects should definitely be enough to draw people in to at least check it out.

If Ice Cube can somehow convince Brian Cardinal to sign up for this thing, he can just go ahead and have all of my money now.