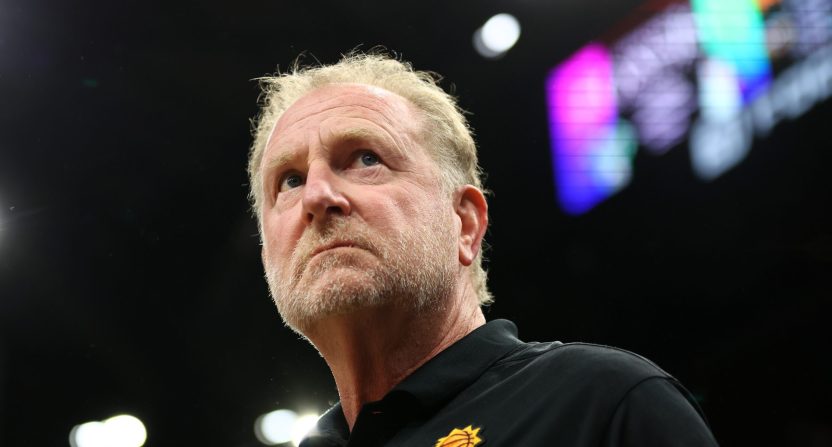 A major sponsor for the Phoenix Suns vows that if majority owner Robert Sarver returns to the team after a one-year suspension, it will not renew its deal.

PayPal, which serves a highly visible role as the jersey patch sponsor for the Suns, said Friday that it found Sarver’s comments “unacceptable.” On Tuesday, the NBA suspended Sarver and fined him $10 million after an investigation found he used “racially insensitive language” and made “sex-related comments towards women.” He is eligible to return for the 2023-24 season.

“PayPal is a values-driven company and has a strong record of combatting racism, sexism and all forms of discrimination,” PayPal CEO and president Dan Schulman said in a statement. “We have reviewed the report of the NBA league’s independent investigation into Phoenix Suns owner Robert Sarver and have found his conduct unacceptable and in conflict with our values.

“… In light of the findings of the NBA’s investigation, we will not renew our sponsorship should Robert Sarver remain involved with the Suns organization, after serving his suspension,” Schulman said in his statement.

PayPal’s agreement with the Suns was worth an estimated $3 million last year, according to ESPN. It is set to expire following the 2022-23 season. PayPal also sponsors the WNBA’s Phoenix Mercury and Spanish soccer team Real Club Deportivo Mallorca, which are also owned by Sarver.

The 60-year-old Sarver now might as well be radioactive when it comes to public relations and sponsorship opportunities. The details of the NBA’s probe into the allegations against Sarver during his 17-year reign in Phoenix are ugly. In the days since the NBA’s decision, many observers have said the punishment wasn’t enough. LeBron James noted, “Our league definitely got this wrong.”

Again, the NBA is going to have to revisit this one. What sponsor will touch this team when he's part of it? https://t.co/EzbHKjzNqT

Do they have to revisit it? Or are the league offices letting the sponsors do the work for them because they never had the votes?