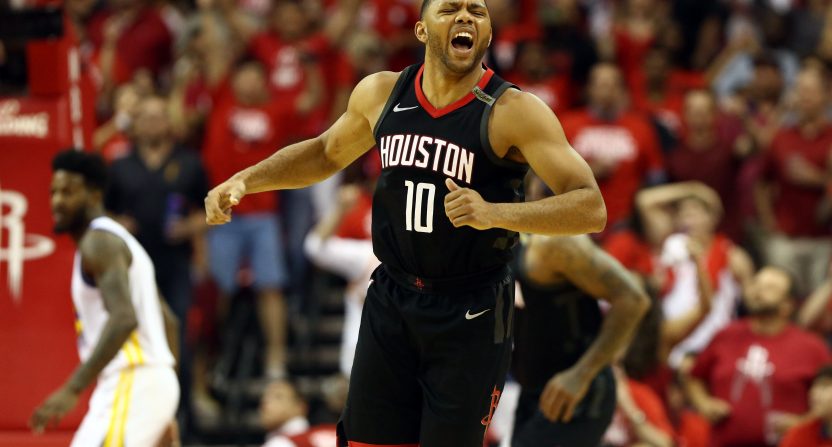 The Houston Rockets came away with a 98-94 win over the Golden State Warriors in Game 5 on Thursday night, to take a 3-2 lead in the Western Conference Finals.

For a series between two juggernaut NBA teams, Warriors-Rockets has actually featured some very sloppy basketball. And, sure, much of this is surely do defense and the physical nature of high-intensity playoff games.

But the first half of Game 5 was flat-out ugly, with both teams blowing numerous opportunities to open the game up, and the game went into halftime tied at 45-45. In the fourth quarter, the Warriors were outscored 27-22 and had several costly mistakes down the stretch.

A few of those key Warriors’ blunders came from Draymond Green, with a rebound opportunity (in which he tried to bat the ball out to the three-point line instead of just grabbing it) and inability to handle a Steph curry pass being two plays that really stood out.

Draymond Green's last few possessions: pass to Quinn Cook instead of driving for a layup; bat an offensive rebound to Houston instead of trying to grab it; pass instead of calling timeout for midcourt possession; unforced turnover.

Why in the world did Draymond try and tap that out? He had a rebound and (likely) easy bucket.

The Warriors only got FOUR points from their bench. Steph Curry, Kevin Durant, and Klay Thompson are obviously the three-headed offensive monster here and combined for 74 points, but Golden State needs more from the rest of their team to win these games (and Steve Kerr gave Kevin Durant a neat talk about trusting his teammates).

Golden State also had 16 turnovers (compared to 10 for Houston), and that department has gone a long way to deciding their games.

It also has to be frustrating for the Warriors that they weren’t able to win despite Rockets star James Harden going 5-for-21 from the field and 0-for-11 on three-pointers.

James Harden has missed 20 3s in a row. During his shooting drought, Houston has outscored Golden State by 12 points pic.twitter.com/zwyROqATrf

The Rockets were led in scoring by the sharpshooting Eric Gordon, who had 24 points off the bench and hit a big three to beat the shot clock with just over a minute remaining.

So the Rockets are now one win away from the NBA Finals with two chances to get it done. But if they have to get it done without star point guard Chris Paul, that’s going to be quite a difficult task.

Paul suffered a right hamstring injury late in the fourth quarter, and his status for Game 6 (and beyond) is unknown.

Game 6 heads back to Oracle Arena in the Bay Area on Saturday, and if the Warriors win that, Game 7 will be Monday night in Houston. The Rockets certainly hope CP3 will be available for both games.