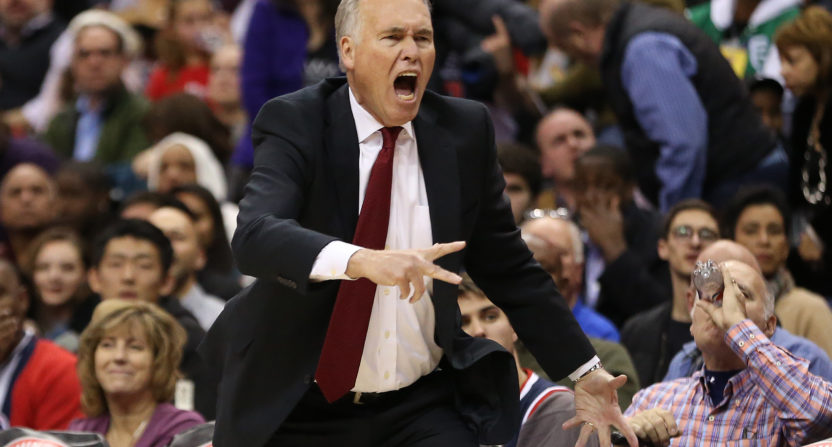 Some late-game exchanging of verbal unpleasantries between the Los Angeles Clippers and Houston Rockets resulted in the late-game ejections of Blake Griffin and Trevor Ariza, but it seems things were coming to a boil well before that incident with just a little more than a minute to play on Monday night in Los Angeles.

Rockets head coach Mike D’Antoni said Griffin made contact with the coach on the sideline, which was accompanied by a heated exchange between the Clippers star and the Rockets coach.

The verbal jousting resulted in double technical fouls for Griffin and D’Antoni. During the postgame media sessions, when asked about the incident on two separate occasions, D’Antoni replied, “You mean after he hit me?”

Mike D’Antoni said Blake Griffin hit him right before each got in each others faces and were issued technicals. #Rockets  #ItTakesEverything pic.twitter.com/03hPtj1AxK

The moment in question appeared to happen with roughly 3:40 left to play in the fourth quarter. Slowing down the replay of the sideline interaction appears to show some contact between the two, but this is the only video evidence to suggest there was any contact. It is difficult to say definitively whether Griffin “hit” D’Antoni or not.

Here's the play where Blake Griffin went right at D'Antoni on the way up the court, going out of bounds to bump him. D'Antoni complains about it immediately. pic.twitter.com/dwZeRJlxmv

The chippiness that ensued is what drew the double technical fouls in the tense game.

Mike D'Antoni drops a "f*** you on Blake" pic.twitter.com/2QkM6fvGHm

After the game is when things really got a little nuts as Rockets players reportedly tried forcing their way over to the Clippers locker room to settle things one way or the other. D’Antoni managed to walk away with a smile during his postgame comments despite his Rockets coming away with the loss to the Clippers, because as he smugly suggested, the Clippers are fighting for a playoff spot while the Rockets are currently holding the second overall seed in the Western Conference behind the Golden State Warriors. The Clippers are currently floating in the seventh seed, so if those playoff seedings hold up for the second half of the season, we have quite the heated first-round battle on our hands between the Clippers and Rockets.

The Clippers have won the first two meetings between the teams this season and the third matchup is scheduled for February 28 in Los Angeles. The fourth and final regular-season meeting will take place in Houston on March 15. Will the tempers cool down in time for the next encounter in late February, or will this adrenaline rush of animosity be simmering for the next month and a half?